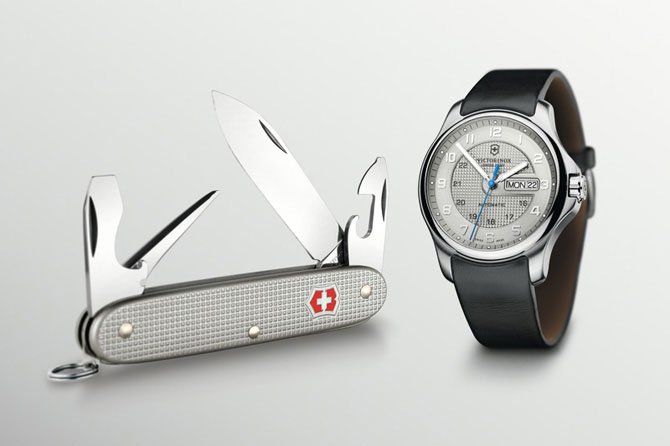 The dials of the Officer’s timepieces is reminiscent of the the knife as it has an elongated shape. The brushed finish dial has luminescent markers and Arabic numerals for easy legibility. The hour and minute hands are also easily legible and slightly different with each version. Coming off the case is a leather strap that gives the watch a contemporary look. The band also comes in a metallic form that features a brushed and polished finish.

The Swiss Army knife that accompanies this Officer’s watch include two versions that have been specifically created for this occasion. One is a medium gray while the other one is an anthracite gray, both match the watch they come with. The knife includes a reamer, cap lifter, screwdriver, wire stripper, and key ring, with one version also having a large blade. The knife also includes an engraving panel on the back to engrave names or initials to personalize it.

Specifics of the Officer’s Watch

Specifics of the Swiss Army Knife:

As we speed through August, summer is rapidly coming to a close. It’s time to get the most out of your vacation before diving into the fall, but sometimes travel can be as stressful as work itself, especially if your luggage isn’t up to par. Nothing’s worse than toting a suitcase with a broken handle and missing zippers through airports and train stations. 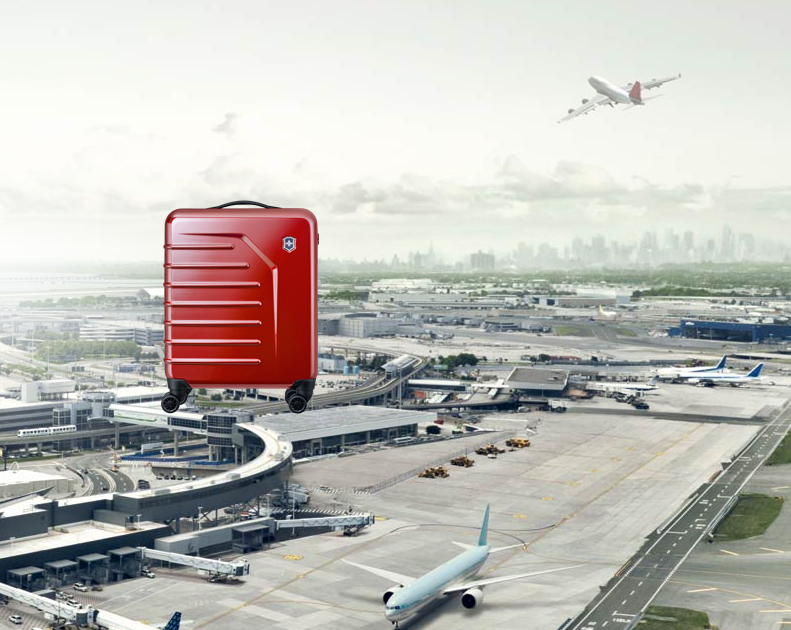 If you need your luggage to outlast a war, or at least your vacation, then there’s no better answer than the Victorinox Swiss Army Architecture line. Solid, space-saving, and sporting as many pockets as their Swiss Army knives have tools, the Architecture line is a traveler’s best friend whether you’re heading for Hawaii, a business trip, or on your even on your way to college.

The economical use of space and useful pockets make the Architecture line ideal for carryon luggage. With so many options, you can pick the bag that best fits your travelling needs.
The Architecture line is defined by a particular attention to detail for those on the go. Take the Trevi with Security Fast Pass carryon bag. The specially designed laptop case is crafted to make traveling through airports with a laptop a breeze, opening easily to reveal the computer without forcing you to constantly rearrange your belongings. 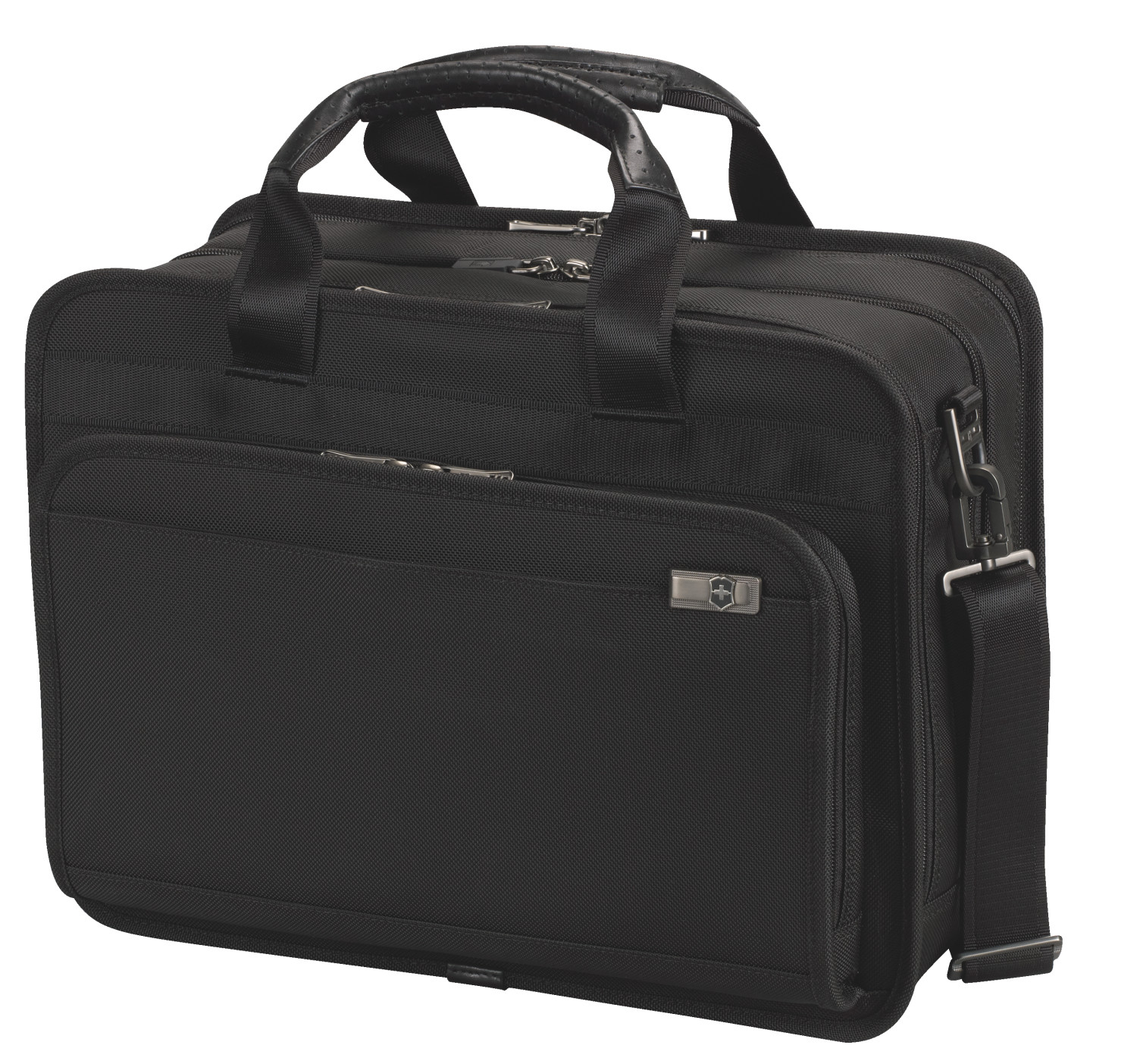 If a backpack’s more your style for those who like to mix business and adventure, then the Big Ben with Security Fast Pass should be your best friend. Like the Trevi, the backpack opens to easily reveal a laptop in airport security. The pack also features a hidden zipper pocket, as well as panels with places for electronic devices, flash drives, keys, even business cards. 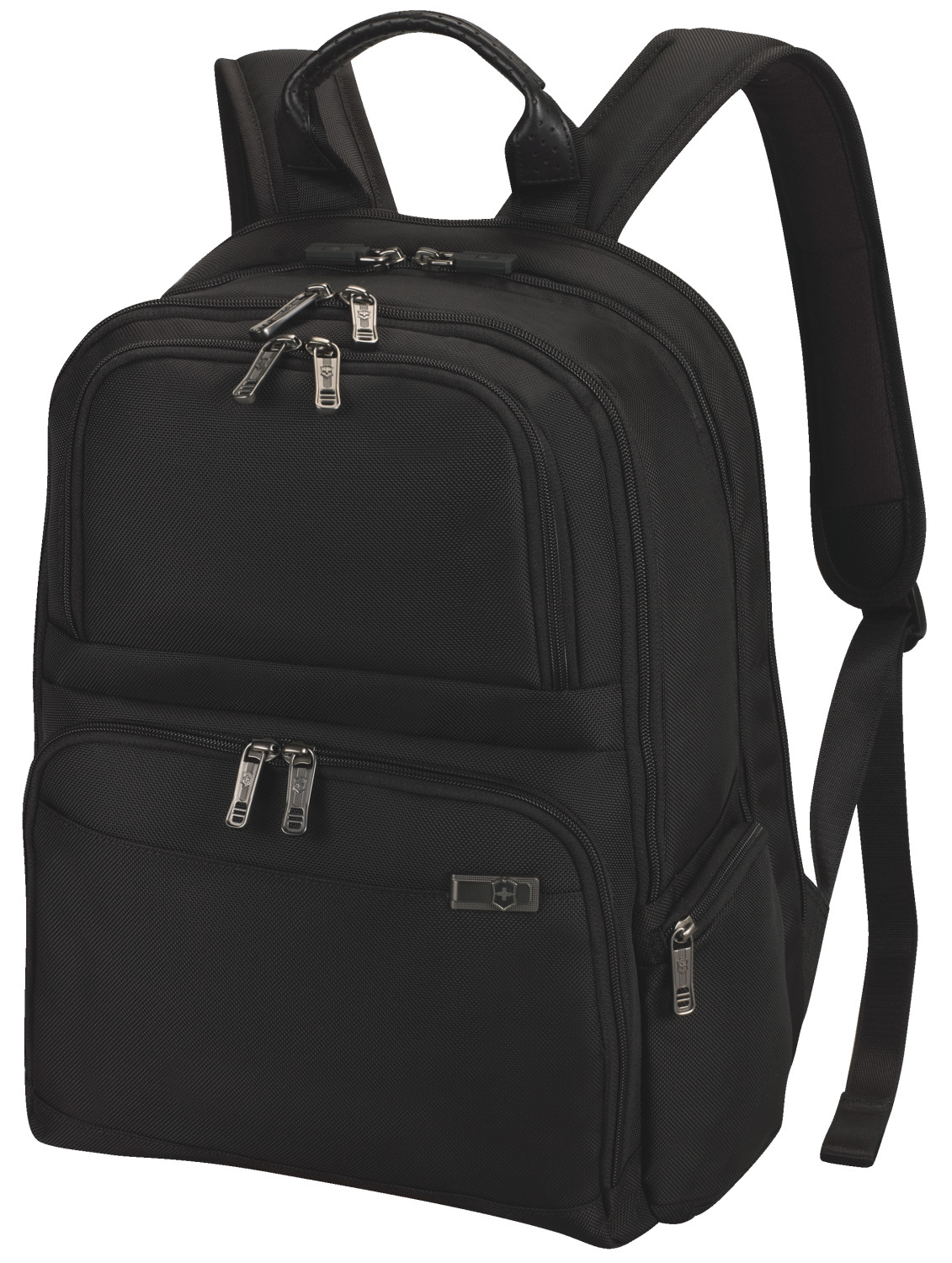 If your travels are less far flung, then the Tribune provides the perfect companion for a day out. The ultra-thin digital bag is only 1.75” deep and provides the best fit for iPads, Kindles, and other portable devices. With an adjustable shoulder strap, the Tribune will keep your devices safe without forcing you to carry around a clunky laptop bag. 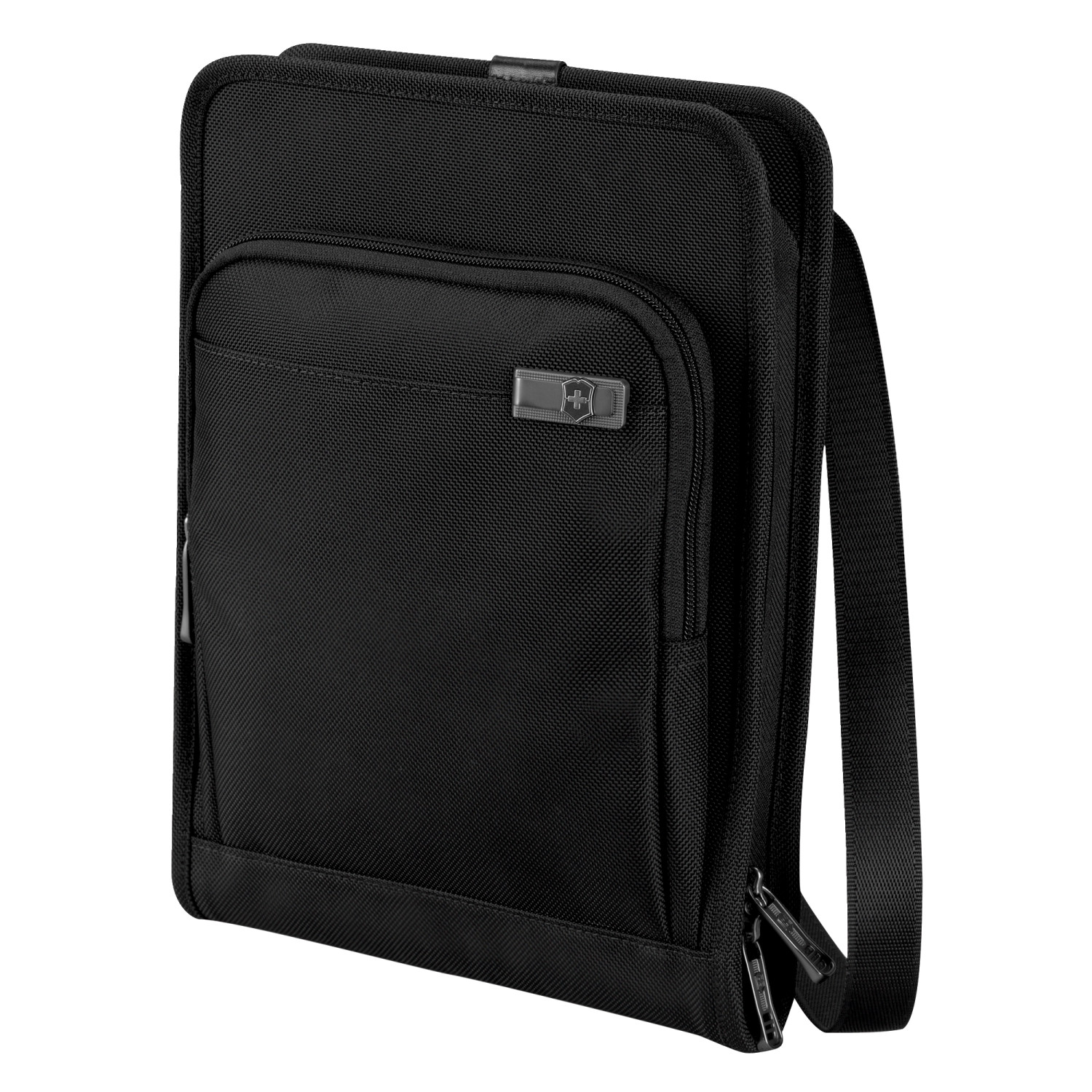 Whether you’re living life out of a suitcase, a backpack, or a daypack, the Victorinox Swiss Army Architecture line provides a fantastic blend of useful pockets and thoughtful adjustments to help travelers breeze through even the most difficult of security conditions with ease. Since so many of us go on vacation to leave emotional baggage behind, shouldn’t our physical luggage be as breezy as the summer air?

While Victorinox Swiss Army is probably most well known for producing the iconic Swiss Army knife, the company also has an impressive collection of watches, similarly manufactured with military purposes in mind. As for its Swiss Army knives, Victorinox pays close attention to combining aesthetic value and high functionality in its timepieces, seen with the Alpnach Mechanical Chronograph Special Edition watch.

With its name referring to the location of the Swiss Army base in Alpnach, Switzerland, this watch is well suited for military personnel and ordinary men alike. Inspired by military helicopters in particular, the Alpnach Mechanical Chronograph Special Edition watch even looks as if it could have been pulled from a helicopter cockpit.

The watch is nearly all black, excluding the white marks and some red accents on its dial, and is finished with a PVD treatment, commonly seen in military gear to prevent wear and scratches for long-lasting durability. The 44mm circular case has two knobs jutting off its right side.

The Alpnach Mechanical Chronograph Special Edition watch, akin to Swiss Army knives, serves multiple functions in a user-friendly manner. The time on the watch is easy to read and the dial additionally has a window for the day of the week and the date. It has a speed-measuring tachymeter on its inner bezel and has the unique and quite handy feature of a unidirectional rotating outer bezel used for counting down time in intervals up to 59 minutes.

The three subdials are well proportioned for the watch, with one of them incorporating a small seconds counter marked by a distinctive four-bladed hand, intentionally reminiscent of a military helicopter’s rotor. In sticking with the military aviation theme, the strap of the Alpnach Mechanical Chronograph Special Edition watch is made of the same type of nylon commonly used in old military flak jackets.

While Victorinox Swiss Army’s timepieces are not as prominent as their Swiss Army knives, such watches as the Alpnach Mechanical Chronograph Special Edition watch should not be overlooked within the industry. Drawing inspiration from military helicopters, the Alpnach Mechanical Chronograph Special Edition stands as a tough, rugged timepiece, evoking a sense of durability in its aesthetic appearance and feel, as well as, in its high-tech and precise functionality.

Take a look at our entire collection of Victorinox Swiss Army here.

With Mother’s day already almost forgotten and the guy in charge of buying those presents still recuperating we think its time dad got a little appreciation. We want to make it as easy as possible to give Dad the gift he really wants so we put together some of our nicest watches and dropped the prices really, really low. Here are some hand picked watches from the sale, from Raymond Weil, Baume et Mercier and Victorinox we know we have the right gift that will fit perfectly on dad’s wrist. You can take a look at all the watches on sale right here and take an extra %5 off with code DAD2012.

Click right on through to your favorite watch or browse the entire sales section.

Swiss Army Victorinox Dive Master 500 Mechanical watch is a stylish watch that comes in different versions and colors to suit the taste of many folks. This reasonably priced diving timepiece, which ranges in price depending on the model, is not only nice to look at but very functional as well. The watch features all the qualities that make Swiss Army watches popular among the masses, including stylish design, quality finish, and impressive functionality.

The watch comes in a 43 millimeters wide PVD coated gunmetal stainless steel round case. Most of the case and parts of the gunmetal PVD coated stainless steel bezel have brushed finish. Part of the unidirectional rotating diver’s bezel has polished finish for a more attractive look. The look of the case is further enhanced by the quite substantial screw-down gunmetal-tone steel crown. It has scratch resistant, anti-reflective crystal over the dial and mineral crystal over the see through case-back of the watch. The case is quite rugged and water resistant to 500 meters / 1650 feet.

The dial of the Dive Master 500 mechanical is easily legible, making it also very easy to appreciate the intricate details of the watch. The dial comes in various colors, including blue, orange, red, and black, which often match the color of the strap. The large sword style hands have luminous accents that make them very easy to see. The luminescent Swiss Army logo at the 12 o’clock position as well as the luminescent baton (at the 6 and 9 o’clock position) and dot hour markers everywhere else can be easily seen as well. There is also a smaller ring of Arabic numerals with military time. The immense amount of SuperLuminova used throughout the dial is extremely advantageous for night viewing. There is a date display window at the 3 o’clock position and minute markers all around the outer rim. This diving watch is powered by a mechanical self-winding ETA 2892-2 movement.

The strap on the watch comes in various colors and is comfortable on the wrist. The striated strap has gunmetal PVD coated stainless steel buckle. The strap is a high quality, thick rubber made in Switzerland. As previously stated, the strap color matches that of the dial for a complementary and beautiful finish. Whether it is a bright orange or a subdued black diving watch, the Victorinox Dive Master 500 mechanical has what you are looking for.