The Swiss luxury watch brand Richard Mille produced and introduced the RM028 back in 2010, and this top notch timepiece has remained popular and was recently given a new rendition. This Diver’s watch has many similar technical characteristics as the previous models of this collection. This eye catching watch is not just appealing aesthetically but very pleasing visually as well. The RM028 Brown PVD model will be available at Richard Mille retailers and Richard Mille boutiques. 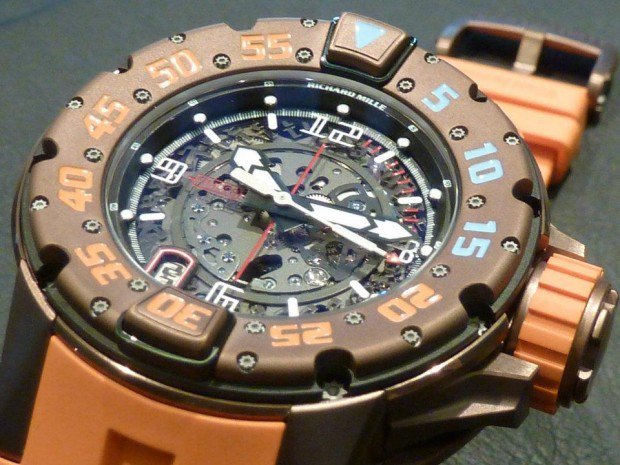 The RM 028 has an impressive water resistance of 30 atm (300 meters), which is necessary for diver’s watches and has been built following diver’s watch ISO norms 6425. This is achieved by the three-part case construction. The bezel is made up of three sections that include 22 torque screws for alignment and adjustment. This bezel is unidirectional and has brown PVD coating and is microblasted. The case-band and case-back are provided with a PVD coating (brown) and are satin-finished. The watch uses some of the best techniques from the Haute Horlogerie and hand finishing traditions that make it unique and distinguishable.

The watch houses the RMAS7 Caliber, which is an in-house, skeletonized automatic movement. The rotor has variable geometry and free sprung balance has variable inertia. The movement beats at a frequency of 28,800 vibrations per hour and has a power reserve of 55 hours. The function include indication of hours, minutes, seconds, and date. The date window is located at the 7 o’clock position. 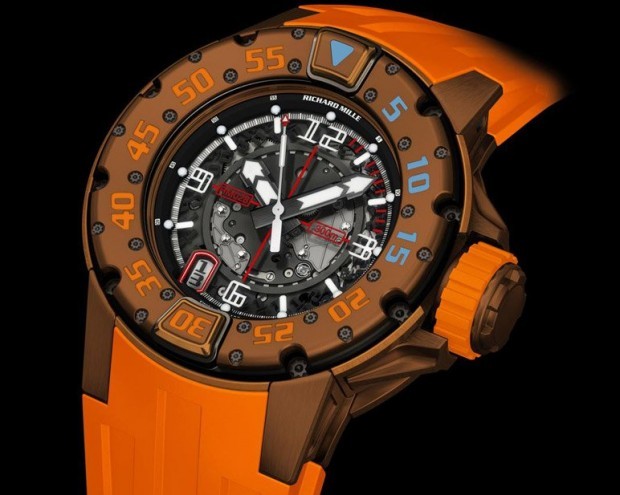 The unique features of the watch can be seen throughout. The minute markers, the rubber strap, and the screwed crown can be easily seen as they are bright orange. The first 15 minutes markers are presented in blue however.

The series is expected to be available in a limited edition of 100 units or less with a price range between $80,000 and $90,000 a piece. As the rest of the Dive Watch series by Richard Mille, this watch combines attractive features with top notch functionality.

Richard Mille has long supported motor sports and its athletes. It has partnered with several race divers throughout the years, including Felipe Massa, Alex Brundle, Martin Brundle, Charles Leclerc, and Jules Bianchi. Now this famous brand has added Romain Dumas to the list. 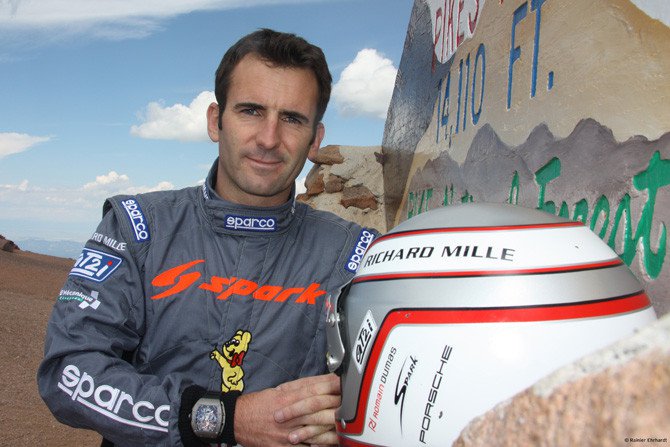 Born on December 14, 1977, Romain Dumas began Kart racing when he was 15 years old. Achieving several wins at a young age, he notched his first major victory in 1998 when he won the Volant ELF ACO at Le Mans to become the French Formula 3 Champian. Dumas has since won many other races and has a successful career that spans over 20 years. He has made 11 consecutive 24 hours at Le Mans appearances, and in 2010, he won the 24-hours at Le Mans behind the Audi R15. On Sunday, August 12th, this French driver took on the legendary American Pike’s Peak hillclimb, where he took second place, just 17 thousands of a second behind Rhys Millen.

Duman, a watch enthusiast, has worn the RM 011 FM during races, and he was in fact wearing this watch during his hillclimb up Pike’s Peak, Colorado’s highest mountain. The RM 011 FM, which is designed for motor sports, features a 50 millimeters Titanium case with DLC coating. This timepiece, which is a 30 piece limited edition version of the brand’s popular flyback chronograph, is a beautiful watch. It combines chestnut red gold and sleek black DLC titanium. The colors of the case contrast nicely against the other parts of the watch. This watch is powered by an automatic movement that features functions such as the hours, minutes, seconds and date. 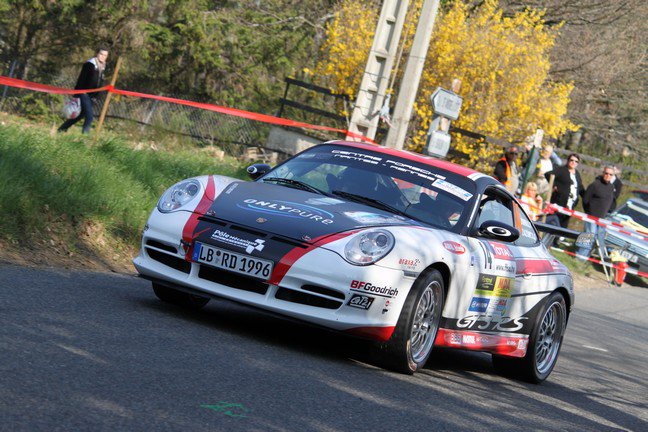 The fit between Dumas and Richard Mille is a good one, especially since Dumas is a fan of the brand. A new limited edition Richard Mille timepiece that features Dumas is expected to be produced in the next few years to celebrate the partnership between this famous watchmaker and racer. Like its previous watches, this watch will surely exhibit high watchmaking skills with high performance and quality.

World champion sprinter and 4th fastest man in the world Yohan Blake has recently been named the ambassador to luxury watchmaker Richard Mille. Blake hails from Jamaica and reports having an interest in sports at a young age and excelled at cricket and bowling then his childhood principal witnessed his speed and agility running to the wicket while playing cricket when he was encouraged to take up sprinting. 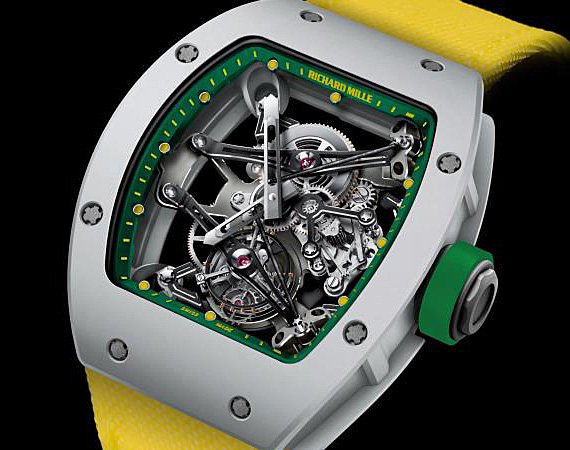 Soon after Blake began sprinting he began breaking and setting records. He was the youngest person to break a 10-second barrier run by finishing in 9.96 seconds then later broke that record by completing the run in 9.93 seconds. At age 21 he became the youngest 100-meter world champion in 2011 breaking the record previously set by Carl Lewis at the age of 22. Remarkably, Blake only continued to improve his time and is now competing in the 2012 Summer Olympics where he is competing alongside fellow Jamaican Usain Bolt. 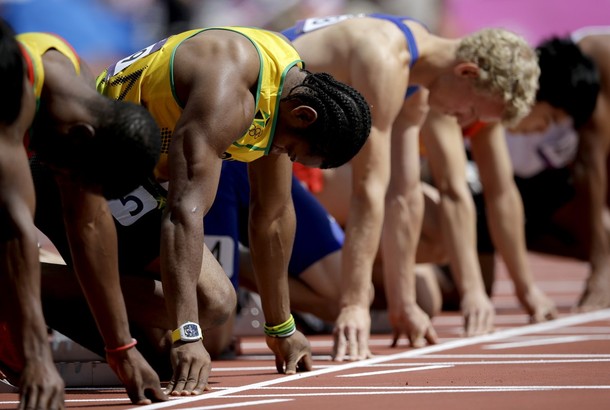 Blake’s impressive track record made him the ideal candidate to represent the Richard Mille brand and be the newest brand ambassador of the company. The Richard Mille brand of watches operates under a concept based on three pillars: using only the best techniques and innovation with artistic and architectural elements represented all in an easy-to-use watch that is finished and polished by hand. The brand itself is still quite new but has proven to be one of the most desirable and highly coveted watches on the market.

Richard Mille offers a range of watches from a super swanky model dripping in diamonds to a more modest model in titanium with a skeletonized dial showcasing the complex internal movements. Richard Mille created a one-of-a-kind prototype for Yohan Blake called the Richard Mille Tourbillon. This exclusive timepiece is priced at $500,000 and detailed information on the timepiece has not yet been released as there are strict rules set by Olympic officials regarding athletes and endorsements. Official product information is slated to be released three days after the closing ceremonies however, many people are already buzzing about Blake’s luxury watch. 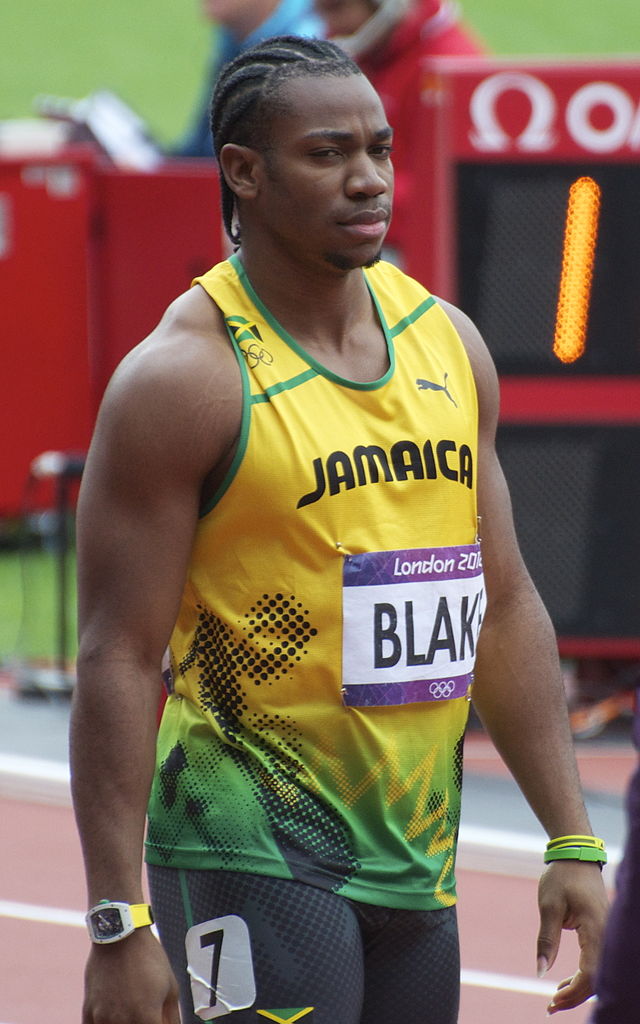 The details that are known of the watch are based solely on photographs which show the Richard Mille Tourbillon prototype with the colors of the Jamaican flag as well as the classic Richard Mille tonneau-shaped case with a skeletonized dial and rubber strap. There is currently controversy surrounding Blake wearing the watch while competing in the Olympics. The issue is said to be under investigation whether Blake broke Olympic rules by wearing a brand that is not an official sponsor of the Olympics. It would be unfortunate if Blake were to be penalized for wearing his watch however, the details of the watch are greatly anticipated.

Richard Mille RM 022 Carbon Limited Edition watch does more than display time with precision, it tells a timely tale of technology fused with innovative design that is tall, dark and handsome. 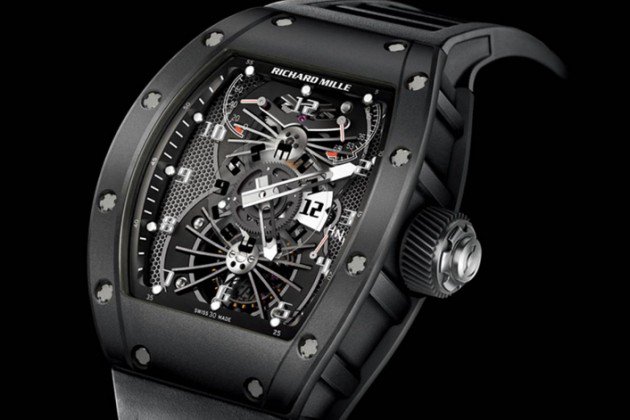 Richard Mille RM 022 Carbon Limited Edition watch is certainly not afraid of embracing or flaunting its luxurious dark side. A side innovatively manufactured fusing multiple materials and ingenious design to create a stunning well spoken timepiece.

The Richard Mille manufacturers combined orthorhombic honeycombed titanium aluminide and carbon nanofiber baseplate and fused the case by injection molding of carbon nanotubes under high pressure into a black polymer producing in sturdy composite of carbon fiber said to be 200 times strong than steel and light-weight as well – quite an impressive feat. The composite carbon fiber case is not only sturdy, but capable of absorbing impact due in part to its structure as well as its masterful surface-volume ratio. 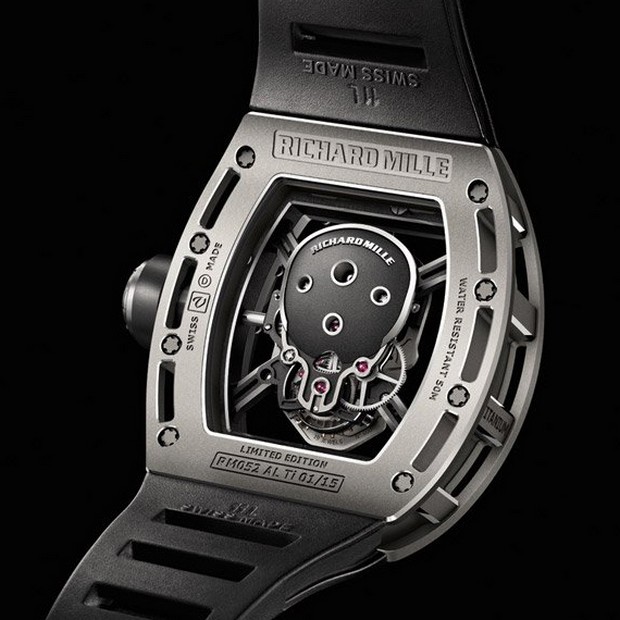 RM 022 Carbon has an impressive contoured 50 mm x 40 mm x 16.15 mm case that is assembled with 20 spline screws in grade 5 titanium and abrasion resistant washers in 316L stainless steel. The watch dial draws admirers into its dual time zones presentation with hours and minutes all perfectly housed under a transparent sapphire crystal. The light-weight case, which is significantly larger than the standard RM 022 case, woos with its aesthetically appealing dial showcasing dual time zones and power reserve indicators. 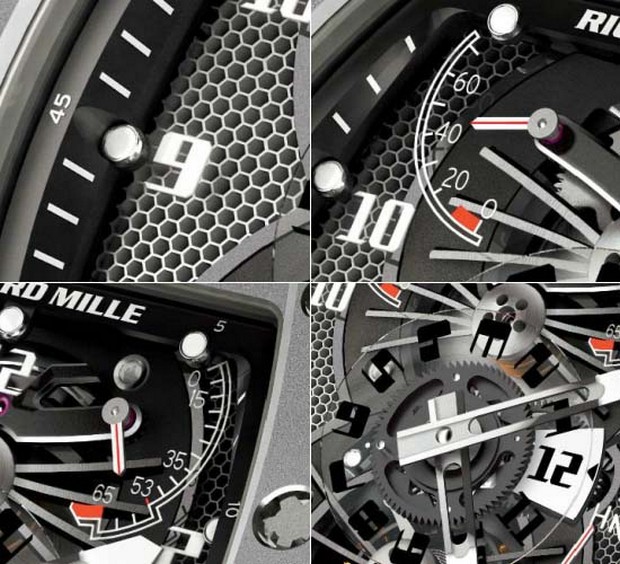 Richard Mille RM 022 Carbon Limited Edition watch is indeed limited – five pieces to be exact. RM 022 Carbon is indeed a catch, a catch that you may have to charter a plane, boat or a simple phone call will do because it is only being sold at retailer in Europe, the Middle East, Africa and Russia. Chances are the RM 022 Carbon may no longer be available, however, if luck is your lady, she may help attract this tall, dark and handsome timepiece your way.

“Big One for One Drop”—the largest buy-in poker tournament ever hosted by the World Series of Poker (WSOP)—is more than just a big name in poker. The tournament’s profits—which must have been considerable considering the $1 million buy-in—will contribute to the One Drop Foundation, a charity founded by Guy Lalibertée of the Cirque de Soleil fame.
Lalibertée, founder of Cirque de Soleil and mastermind behind the supercharged circus’ shows—including the water-based performance of “O” playing at the Bellagio—planned the three-day event to raise money and awareness for his charity, which works to bring clean water to third world countries, providing “water for all, all for water.” 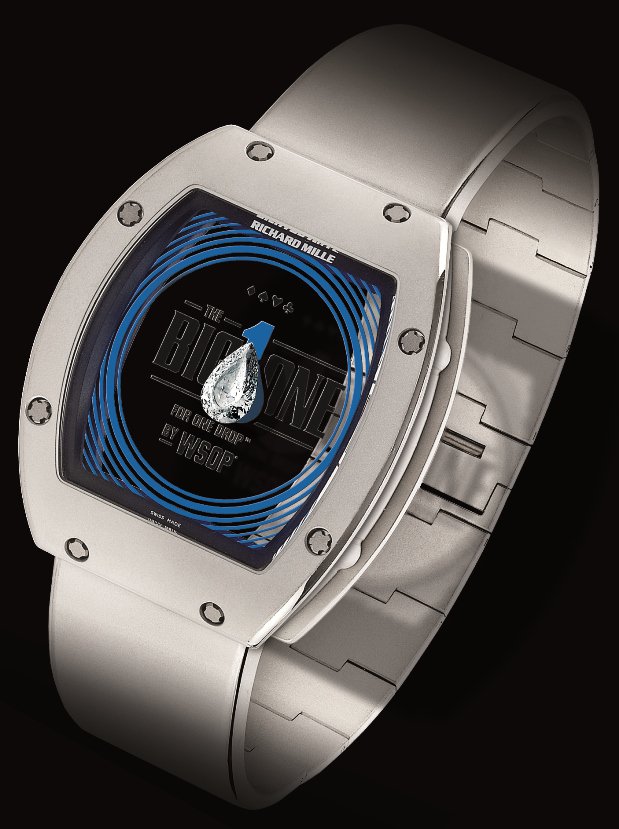 It makes sense that the trophy must be fitting of such a groundbreaking circumstance. With that idea in mind, Richard Mille designed to trophy bracelet for the iconic tournament.
Richard Mille is a new, but thrilling name in the world of watches. Known for his beautiful blend of materials in streamlined designs, it’s no coincidence that the designer was chosen to create a face for the record breaking tournament. The piece he designed for the tournament features the smooth, futuristic aesthetic that makes his work stand out above the rest.
Just as the name of the tournament signifies many purposes, the trophy watch is a unique mix of a commitment to quality and to a greater purpose. The platinum bracelet features a 0.78 carat pear shaped diamond in the shape of a tear drop, encased in sapphire crystal.
The whole piece is given even further depth by the two sapphire crystals superimposed on the case. The picture is completed by a screen reads “Big One for One Drop”—the logo of the One Drop Foundation.
The piece is truly a work of art—and no wonder. It took a whopping 120 hours to assemble as each piece was cambered and enameled by hand. The bracelet is a unique blend of a watch, a trophy, and a chic accessory. It’s the perfect prize for a game that’s all about blending skill with intelligence.
Sadly for those would like to hold the piece in their hands, this watch is only available for the winner of the tournament: Antonio Esfandiari. After paying the incredibly buy-in and beating out 47 other players, it’s certain that the player has earned it.