The Sarpaneva Korona K0 Wuoksi watch has a somewhat unusual tale behind its conception; the watch is timepiece is inspired by an old Finnish legend about a father’s unwavering love towards his daughters. 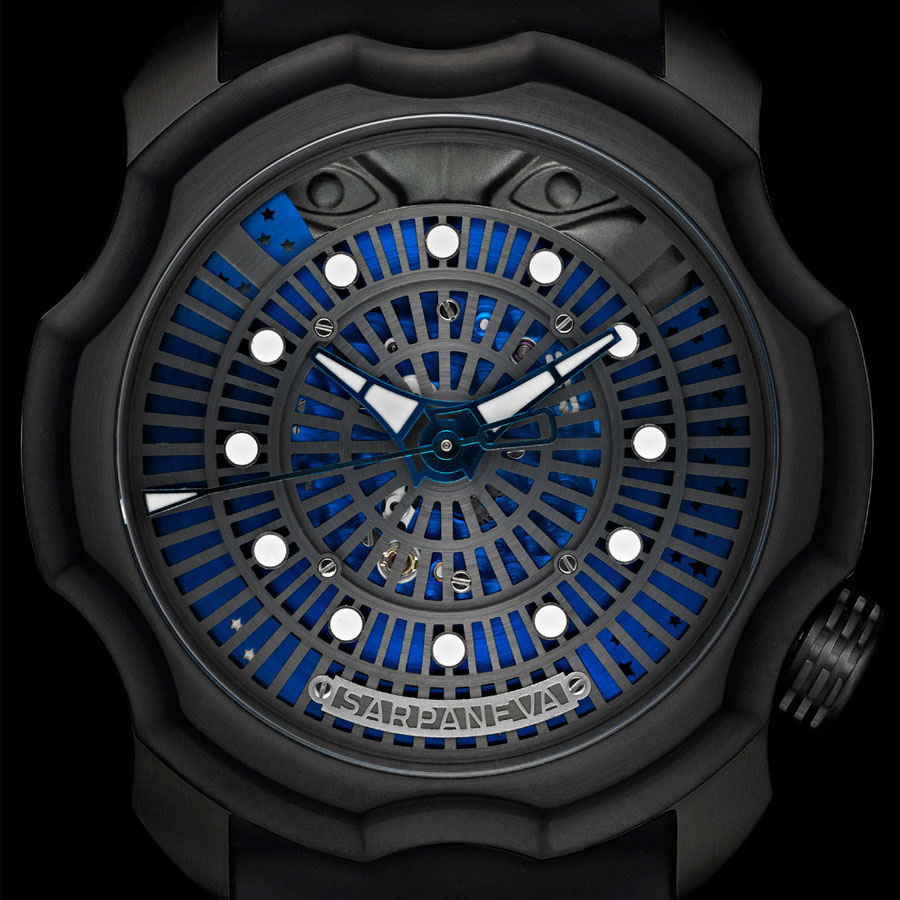 The tale goes that a Nakki, an underwater monster, stole a village blacksmith’s beautiful daughters and kept them locked away in an underwater mansion. The smith, as cunning as he was loving, created a waterproof time iron to help him dive down to rescue his girls. He also created a machine to track the phases of the moon so that he could tell when the tide was weakest and he would have the best chance to rescue his daughters.

At first, it may seem like an odd connection for a luxury watch; a rural village smithy of legend and one of the most well-known luxury brands in the world, but when you think about the extreme lengths that the father went through for his legacy—his daughters—it bears a striking resemblance to the Sarpaneva dedication to their own creations.

Sarpaneva’s latest creation would have been a boon to the old smithy of lore; the automatic movement runs off of a modified Soprod caliber A10, giving it a power reserve of 42 hours. With a steel case, specially designed screw-down crown, and diving bezel firmly in place, the watch is waterproof up to 300 meters, the old smithy could take on a handful of Nakki. 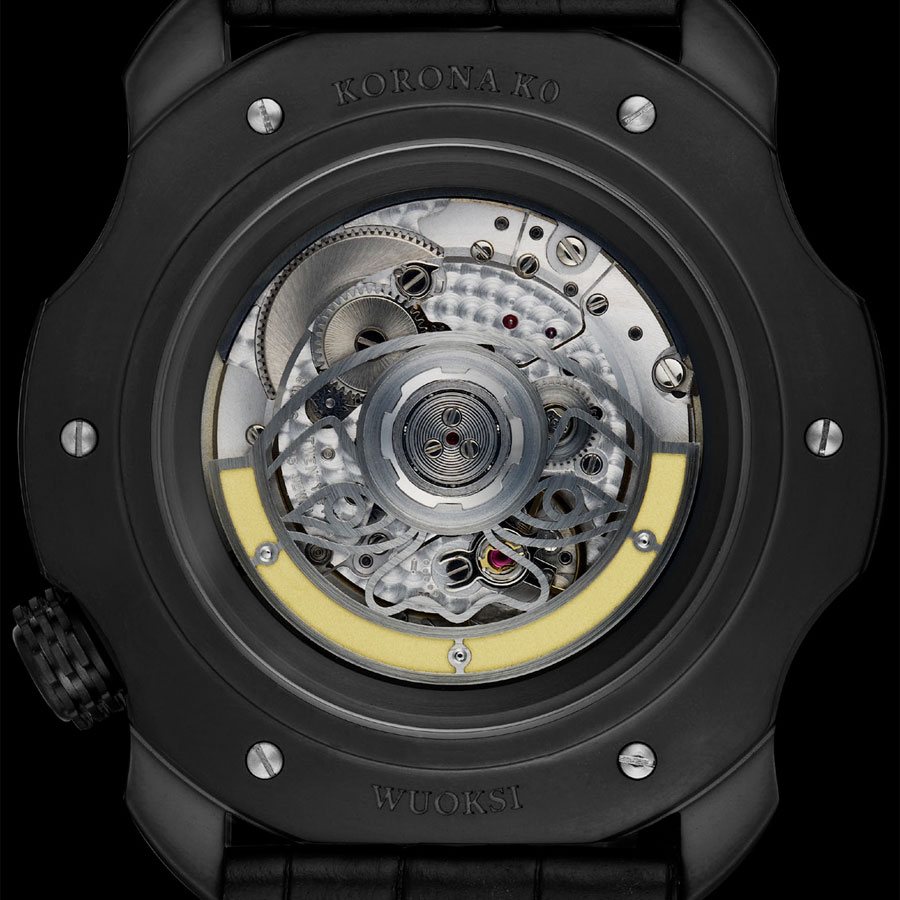 The time piece is further suited for underwater adventures with the Superluminova coating on the watch hands and indices. Your comfort is assured with a choice of alligator, frog skin, or rubber straps.

A sliding disc of the night sky slides to reveal the faces of the moon (available in gold, bronze, silver, or copper)—a complication that Sarpaneva introduced just this year in their KO Dive Watch. Here, it is made more mysterious by the whimsical dial face, revealing the skeleton winding rotor behind the grille. The moon appears to peer out at its wearer—a very nice touch on the piece! 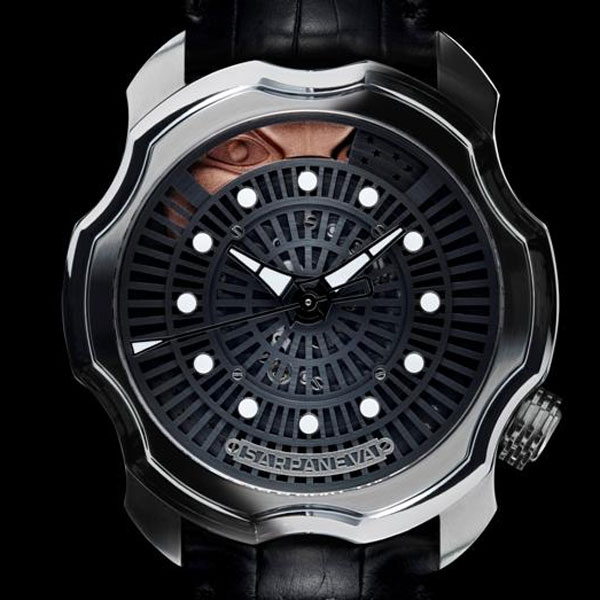 Sarpaneva’s signature moon phase indicator probably won’t help the modern day man fend off any monsters, but it certainly stands out in the watch world as one of the most unique complications from the brand.

This is a glorious watch that blends together legend and true horological knowhow with ease. Using a father that could teach Liam Neeson’s Taken character a few tricks as inspiration, this watch truly lives up to the double meaning behind “Wuoksi:” meaning either “high tide” or “for the sake of something,” this irresistible moon phase watch shows the results what extreme love and dedication can create.

The Neuchatel watch brand Hautlence has introduced new models of its Avant-Garde collection, watches that are sleek, contemporary, and affordable. The new collection has a sporty and hip look that many will associate and gravitate towards. As the name suggests, the collection has a unique aesthetic, which uses a 3-D visual presentation to display the time. 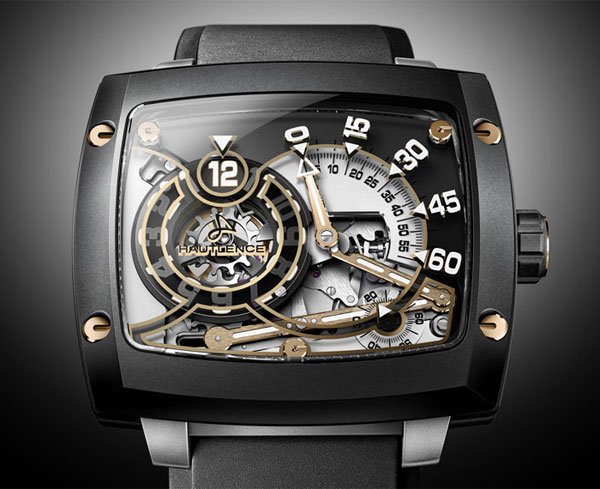 The watch comes in a sleek case that is made of steel and titanium. Some versions come in a black DLC treated case that gives them extra strength while still keeping them light. The case is quite large, measuring 46 millimeters by 42 millimeters and has a height of 12.8 millimeters. Inside the case is Hautlence in-house manual winding mechanical movement, whose functions include jumping hours and retrograde minutes using rod system.

The sapphire crystal dial can be seen on both sides. The upper face of the dial features luminescent minutes and indexes while the lower face features a semi-opaque area and a metal coating made from polished rhodium or rose gold. The luminescent indexes makes them easily legible while the 3D effects of the hours, retrograde minutes, and subsidiary seconds add a unique feature to the watches. 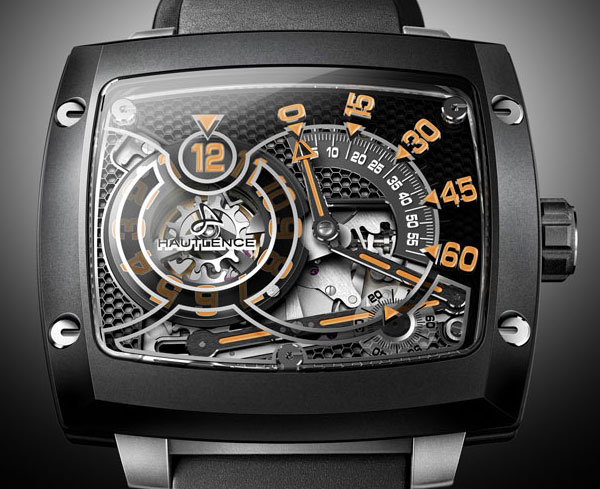 All the models of this collection come on a black strap with folding buckle, which nicely complements the rest of the watch. The price for the watches start at 30,000 CHF. The three models in the Avant-Garde collection include the Rose Gold HLRS01, Blue HLRS02, and Orange Honeycomb HLRS03. 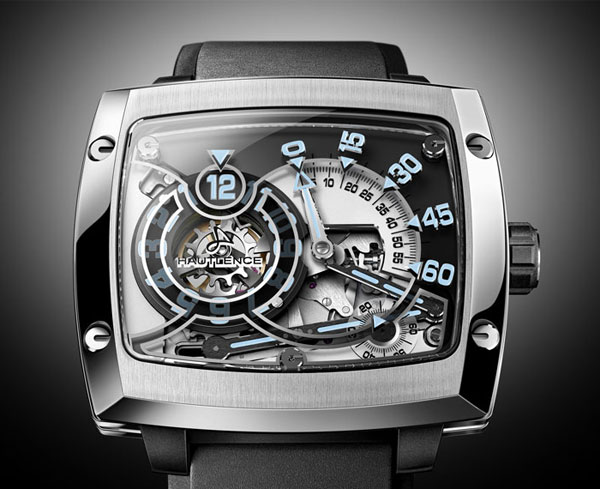 Louis Vuitton Tambour Spin Time watch places a spin on GMT time that is cube-tacular. Louis Vuitton extensive knowledge of luxury has successfully translated in this innovative timepiece to the fourth power of time – cubed time to be exact. 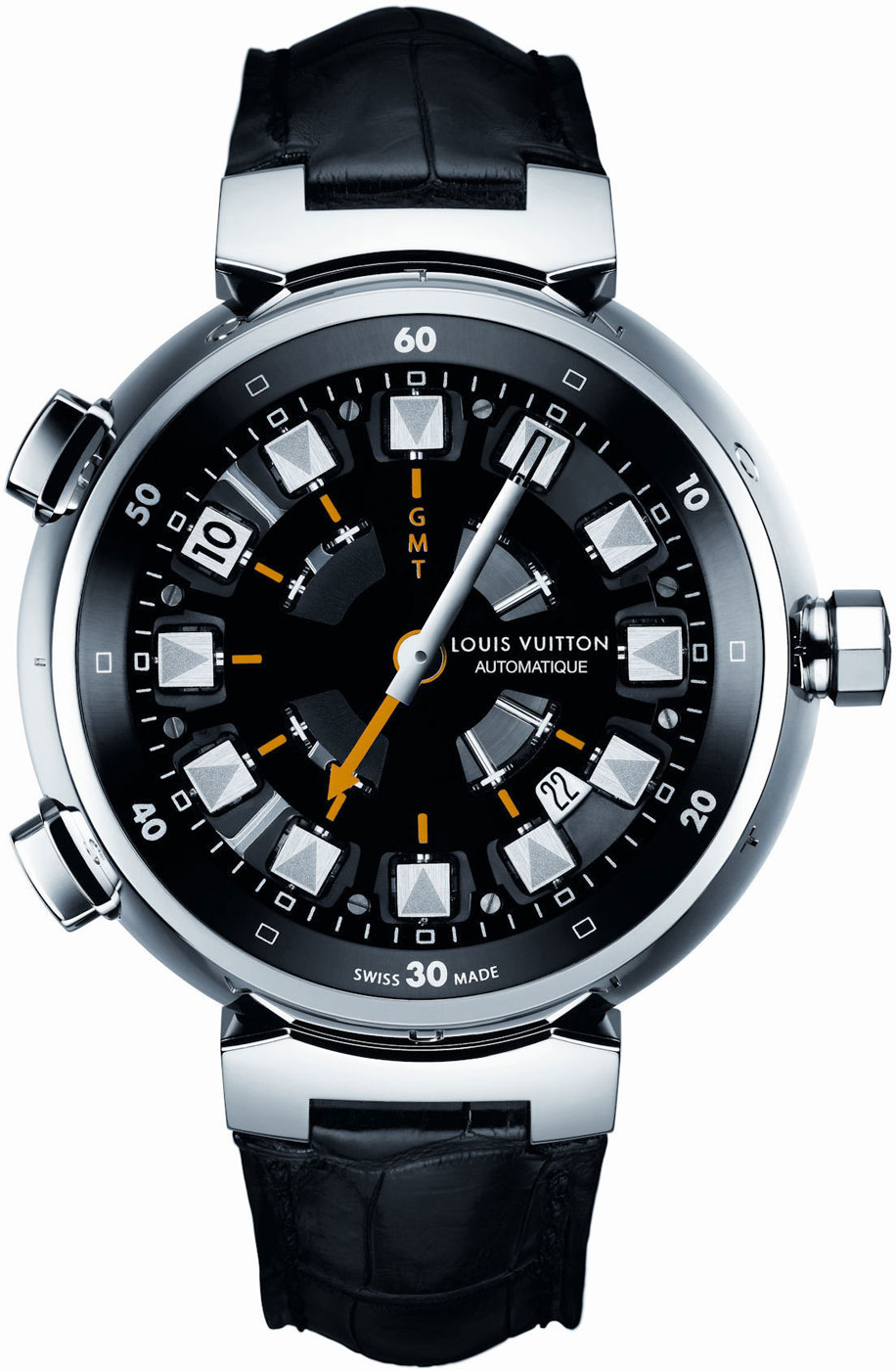 Eleven hour cubes visibly display a letter “V” Louis Vuitton’s historical signature, with the twelfth cube displaying a number to indicate the actual hour. Minutes are read by a normal functioning minute hand. Tambour Spin Time features Swiss-Made LV 119 calibre automatic movement displaying jumping hours. It also features a GMT indication hand which is set using a pushbutton piece located at 8 o’clock along the watch case. A date window is carefully nestled between 4 and 5 o’clock and the LeVel Up system all of which is meticulously housed inside a beautiful white gold 44 mm watch case adorned with a black leather strap. 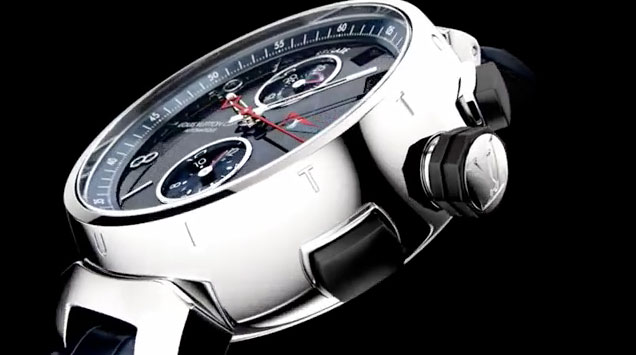 Louis Vuitton Tambour Spin Time watch presents best in complications, technicality and contemporary styling making it an enviable masterpiece in its own class. It is an ingenious watch, specifically designed for connoisseurs desiring a watch that presents time in with innovative complications integrated in an artistic timepiece.

It’s no illusion that Parmigiani Fleurier has one of the best eyes for detail and innovation in the luxury watch industry, and their celebration of the birthday of its founder goes the extra mile to make the timepiece as stimulating to the eyes as the brand has been to the world of horology. The watches are always a breath of fresh air in the industry, but their Tonda 1950 special edition in particular is a rare and unique addition. 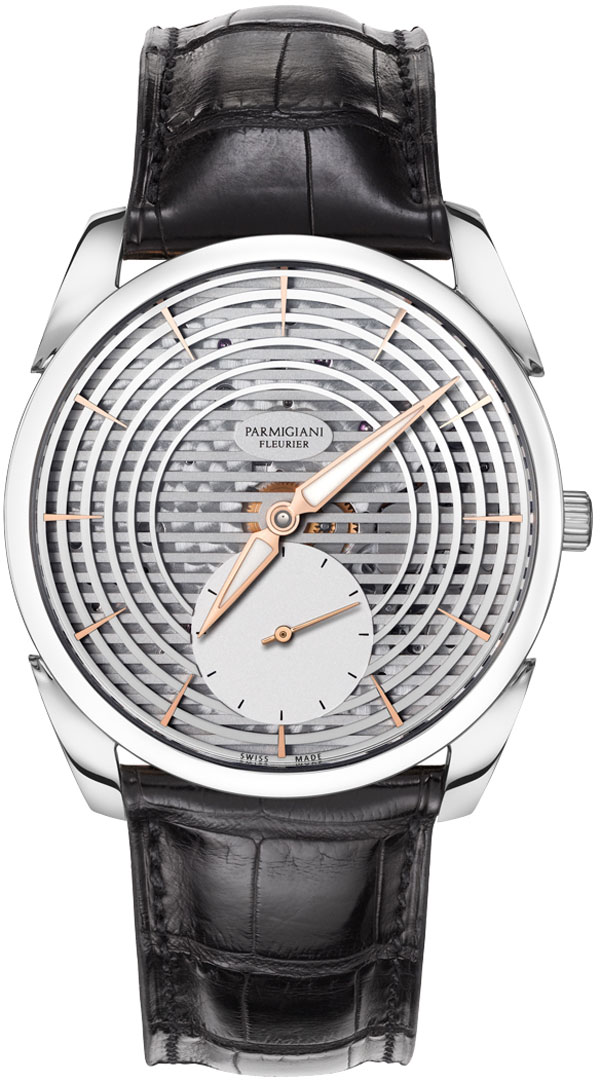 The look of the watch is quite eye-catching; the blend of concentric circles and horizontal grille over a skeletonized structure seems like an optical illusion designed to draw you in. The grille for the piece has undergone several processes including electroplating, molding, and even lithography to create the unique dial piece.

The titanium case adds an even more futuristic element to the timepiece, which is only heightened by the traditional alligator strap and luminescent watch hands. The seconds dial adds another counterpoint to the busy piece, all while making it simple to read the time.

Though much of the watch’s design is focused on the aesthetic of the piece, the watch is manufactured for the best performance possible. Running off of the automatic caliber PF 701 movement, made entirely in-house, the watch is only 2.6 mm thick, making it one of the thinnest watches available on the market.
Water resistant up to 30 meters and with anti-glare sapphire crystal case back, this timepiece is beautifully designed down the very last screw. With a 42 hour power reserve, ergonomically designed circular lugs, and a nigh indestructible titanium case, this watch is about as close to flawless as you can get. It’s nice to design a brand go the extra mile to add functionality to a watch whose unique design can sell itself.

Each watch is specially engraved with a number 1-60 (for each of the 60 available pieces of the edition) along with the words “Special Edition 60 Michel Parmigiani” on the caseback.

The 1950 watch celebrates the year of founder Michelle Fleurier’s birth. The Tonda 1950 edition captures the clean lines that so captivated Fleurier and blends them with modern visual elements effortlessly. In spite of its busy dial, the watch is so cleanly executed that the watch isn’t just easy to read; it’s a pleasure.

If you’re tired of wearing a timepiece with a classic mother-of-pearl or plain looking dial, Piaget just might have just the watch for you. Piaget has created a brand new collection of unisex watches bearing brightly colored stone dials that will add a serious splash of color to any look. 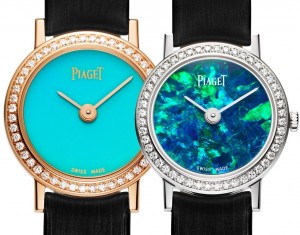 Wearers can enjoy choosing their favorite colored stone dial or pick a watch based on the type of strength you would like to attract in their life. Aside from all the character qualities that the timepieces can impart to the wearer, each timepiece comes fashioned with a bezel encrusted with gems with many of the watches featuring diamonds or polished yellow, white or pink gold.

Another unique feature of the Piaget Altiplano Hard Stone Dials Collection which Piaget has long been recognized for is their ultra-thin dials which measure less than 3 millimeters thick. The ultra-thin watch looks especially striking next to the case of the unisex watch which measures 34 millimeters.

While most women will appreciate the colorful stone dials, diamond accents and positive energies that each of the timepieces bring to the wearer, it would seem that these bold and vibrant watches, although unisex, might be a hard sell for males who prefer a more classic look. Unisex watches often seem difficult to design as they must appeal to both the masculine and feminine wiles which can be quite a delicate balance to achieve. 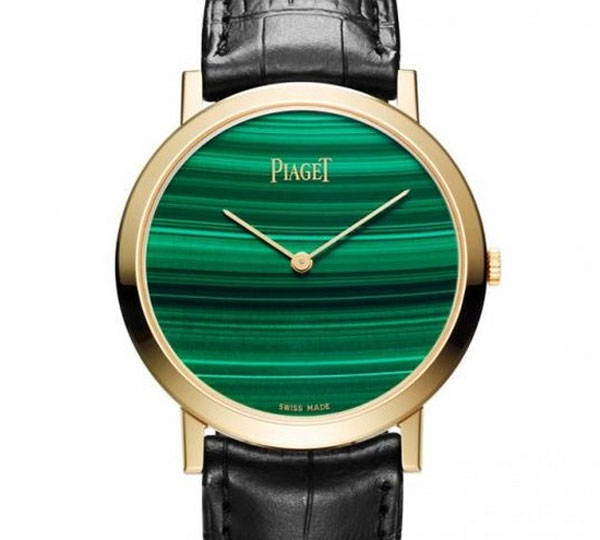 If you happen to be looking for a special timepiece that beholds special energies and a unique stone, the Piaget Altiplano Hard Stone Dials is an ideal timepiece to add to your collection or give as a gift to someone who would appreciate the delicate and unique characteristics of this timepiece.