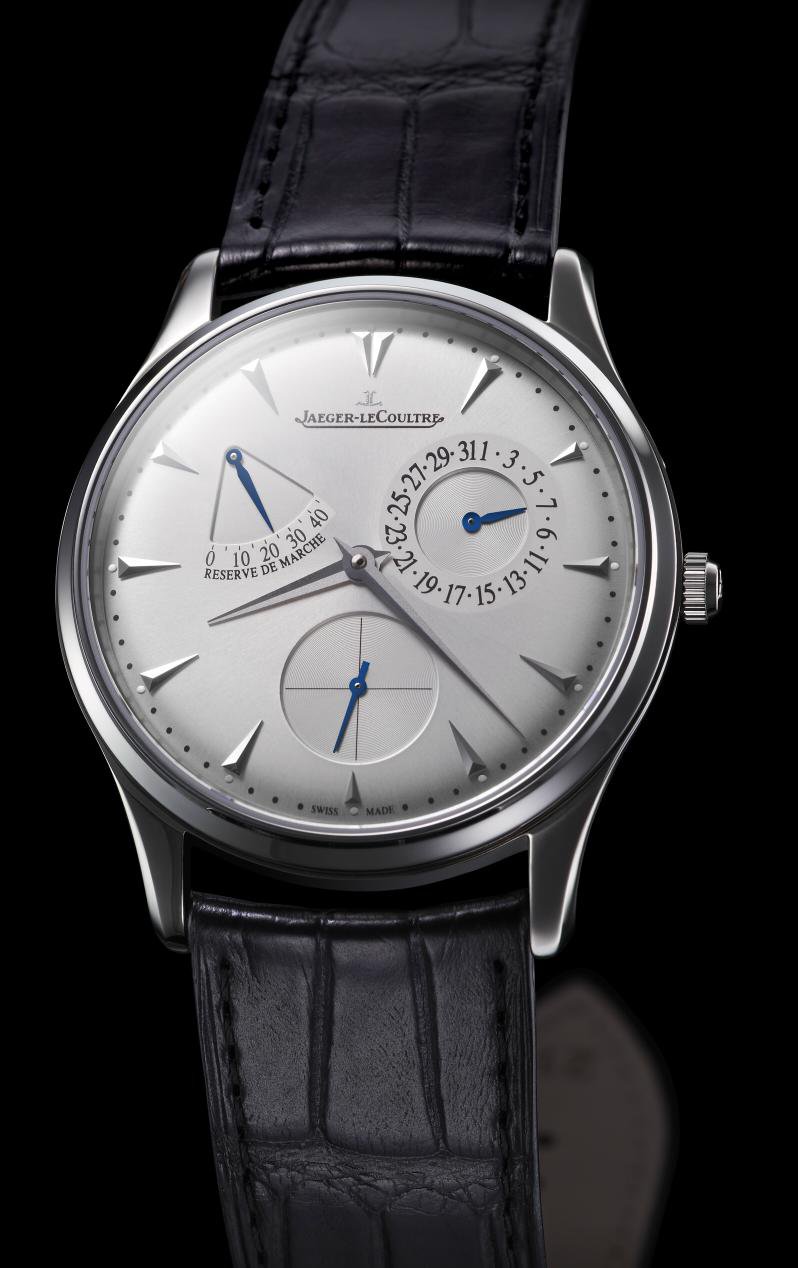 Master Ultra Thin Réserve de Marche classic minimalist charming features are presented in a 39mm round case with a case height of 9.85mm. The dial is eggshell-white and displays hours, minutes, and three sub-dials that indicate date, small seconds and a power reserve indicator amid. The sub-dials are distinctive in size and shape which adds to its attractive charm. Each sub-dial has blue steel indicator hands bearing different shapes and sizes. The top two indicator hands are leaf shaped, whereas the bottom indicator hand is baton shaped. These small details standout on the watch dial and give Master Ultra Thin Réserve de Marche a distinctive presence.

Jaeger-LeCoultre has touted Master Ultra Thin Réserve de Marche’s, JLC Caliber 938 Swiss Made in-house movement as an ultra-thin movement with an automatic self-winding system. However, it is 4.9mm high X 26mm in diameter actually makes it thicker than its mass produced ETA 2897 ebauche, which has similar functionality. 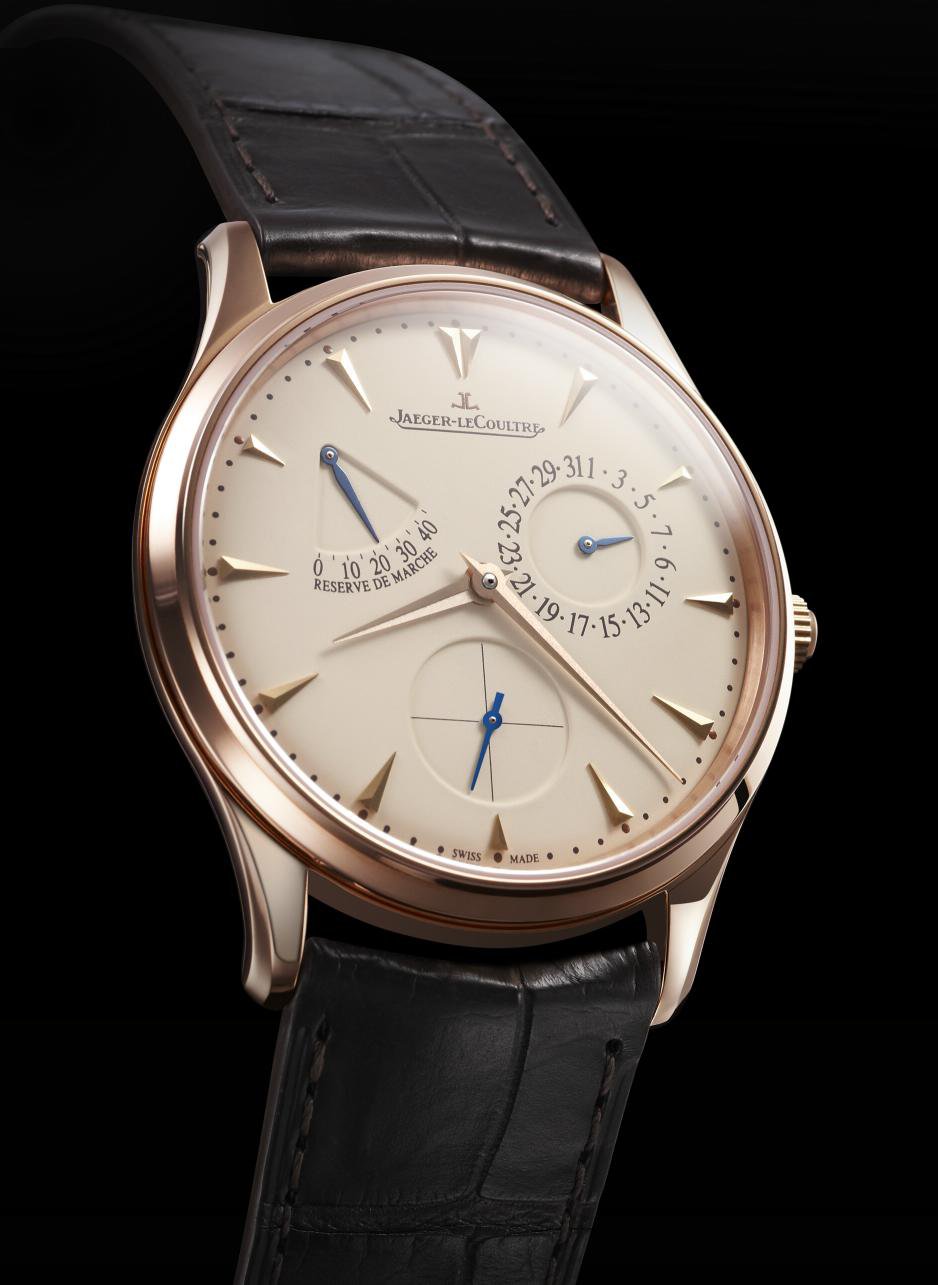 Master Ultra Thin Réserve de Marche is available in a beautiful 18k rose gold case with egg-shell white dial or stainless steel case with silver dial. Both feature a 39mm round case Dauphine shaped hour/minute hands, automatic JLC Caliber 938 Swiss Made in-house movement consisting of 273 components protected under a sapphire crystal and sapphire case-back. Each has 41 jewels with a movement frequency of 28,800 vibrations per hour. The rose gold watch features a chocolate-toned alligator leather strap with a pin buckle; whereas the stainless steel watch features a black alligator strap with a folding clasp.

Despite Jaeger-LeCoultre minimalist appearance don’t for a second be deceived. The watch manages to sport quite a hefty fetching price. The rose gold version (Ref. Q1372520) has a retail value of $20,000. The stainless steel (Ref. Q1378420) has retail value of $10,000, quite a handsome price tag for minimalist timepiece.

To celebrate the 125th anniversary of the famous Raffles Hotel in Singapore, Jaeger-LeCoultre has produced two editions of the Reverso watch. Founded by four Armenian Sarkies and owned by Arab trader Syed Mohamed Alsagoff, this is one of the wold’s famous and popular colonial-style hotels. The hotel was established in 1887 and was named after Singapore’s founder Sir Stamford Raffles. It was declared a national monument in 1987. This 10 bedroom bungalow is located about 500 meters away from the ocean. The hotel attracts wealthy clienteles from across the globe including celebrities and tycoons. It is a hot tourist spot that features a glamorous Long Bar, Palm Court, Billiard Room, and noteable culinary experiences. 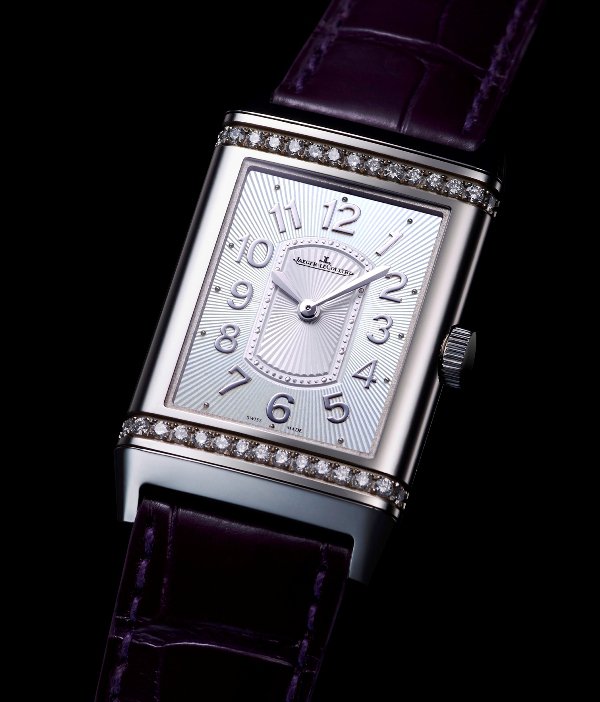 The Jaeger-LeCoultre watch for this special occasion has an exclusive engraving, which reads “Raffles Hotel 1887 – 2012 Singapore.” This double-sided timepiece can be turned over and be worn like a jewel showing off this special engraving. One of Jaeger-LeCoultre’s oldest models, the Reverso is as timeless as the Raffles Hotel. The two versions of this special edition Reverso are the men’s Grande Taille and the ladies’ Grande Reverso Lady Ultra Thin. These two watches vary in features as well as in the movement that powers them. The men’s Grand Taille has a hand-wound Caliber 822 movement while the ladies’ Grande Reverso Ultra Thin has the quartz Caliber 657. 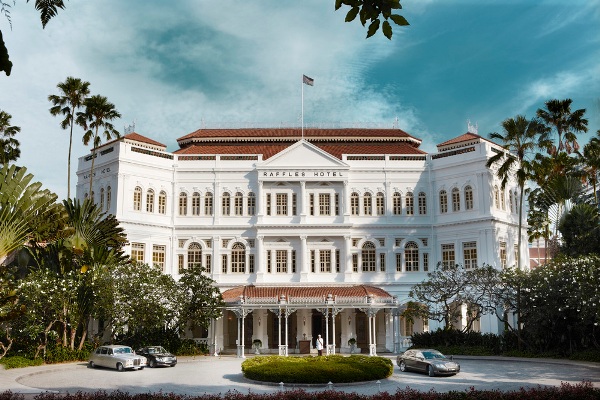 Both versions of the Reverso watch come in a stainless steel cases that is water resistant to 3 bars. The men’s model features a movement with more components, while the ladies’ model adorned with diamonds on the dial. The watches are valued at $7,975 and $10,367. 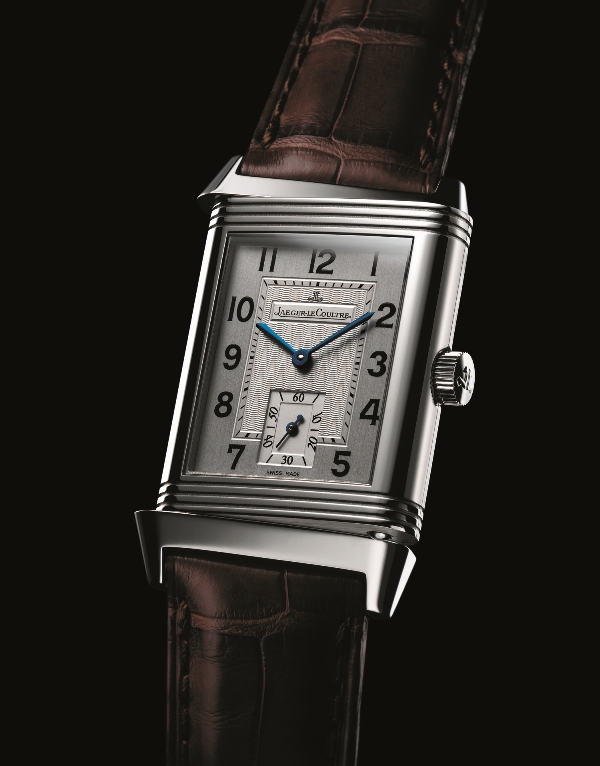 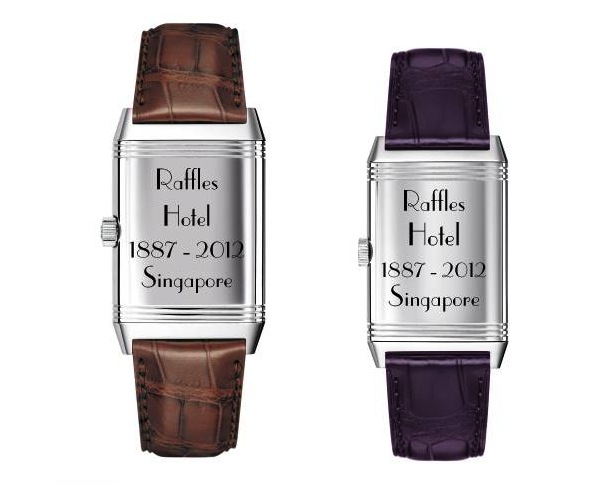 Jaeger-LeCoultre takes “turning back time” literally with their most collectible watch yet, the Jaeger-LeCoultre Reverso Gyrotourbillon 2. Using an innovative new design, the watch uses one of the most complicated tourbillons in the world to keep the timepiece ticking right on time. If you’re looking for a humdrum watch to just get you through the day, then the Reverso Gyrotourbillon is certainly not for you. The rectangular watch face contains double-axis spherical tourbillon that is truly a mastery of tourbillon technology. Jaeger-LeCoultre has completely revitalized the tourbillon, adapting it so that it can function perfectly as a sphere. From thermal treatment to balance springs, the tourbillon has been completely reformatted to suit this watch.
At least as exciting as the spherical tourbillon is the ability for the watch face to rotate around in the case setting. The platinum case rests smoothly against the alligator watch strap within the setting until you turn it, but otherwise remains in place and out of the way while you go about your day. The watch isn’t a piece of cake to read—especially with such cool elements like the spherical tourbillon and rotating watch face, but it has plenty of functions once you drag your eyes away from the perks; hours, minutes, the date, and tourbillon seconds are amongst the useful tools within the watch.
With a 50 hour reserve, this watch is made to last. The anti-glare crystal window is made to last, while the 100ft of water resistance allow the watch to survive in the rain. However, this watch is probably not the best choice to take diving, but it can follow you just about anywhere else.
The power reserve is particularly impressive considering the extra power that the tourbillon takes to move. Tourbillons were extremely popular before quartz watches came into play because the device allowed for incredibly accuracy.
Quartz fever almost banished the mechanism during the ‘70s, but today’s watch world has seen a resurgence of these remarkable mechanisms, such as the one seen in the Reverso Gyrotourbillon. This is a very limited edition watch, with only 75 pieces in production. You’ll have to fight for the watch if you want a piece of this watch action, but it would be well worth it. As one of the most innovative pieces on the market, the Jaeger-LeCoultre Reverso Gyrotourbillon 2 is sure to be one of the most sought-after timepieces of the luxury watch world.

A few years back, when “Batman Forever” was released, Jaeger-LeCoultre crafted a tribute limited edition Reverso watch. To honor and mark the release of “The Dark Knight Rises,” this Swiss watchmaker has once again launched the Reverso Chronograph. This watch can be seen worn by Christian Bale, the actor who plays Batman in “The Dark Knight Rises.” The movie opened in theaters everywhere on July 20, 2012. “The Dark Knight Rises” is based upon Batman characters created by Bob Kane and published by DC Comics. The finale in director Christopher Nolan’s Batman trilogy starring Christian Bale did quite well in the opening weekend. While not clear if this watch will be available for the public or not yet, it has been hinted that it can be found in select places that have Jaeger-LeCoultre brand boutiques, which includes Geneva, London, L.A., and Hong-Kong. 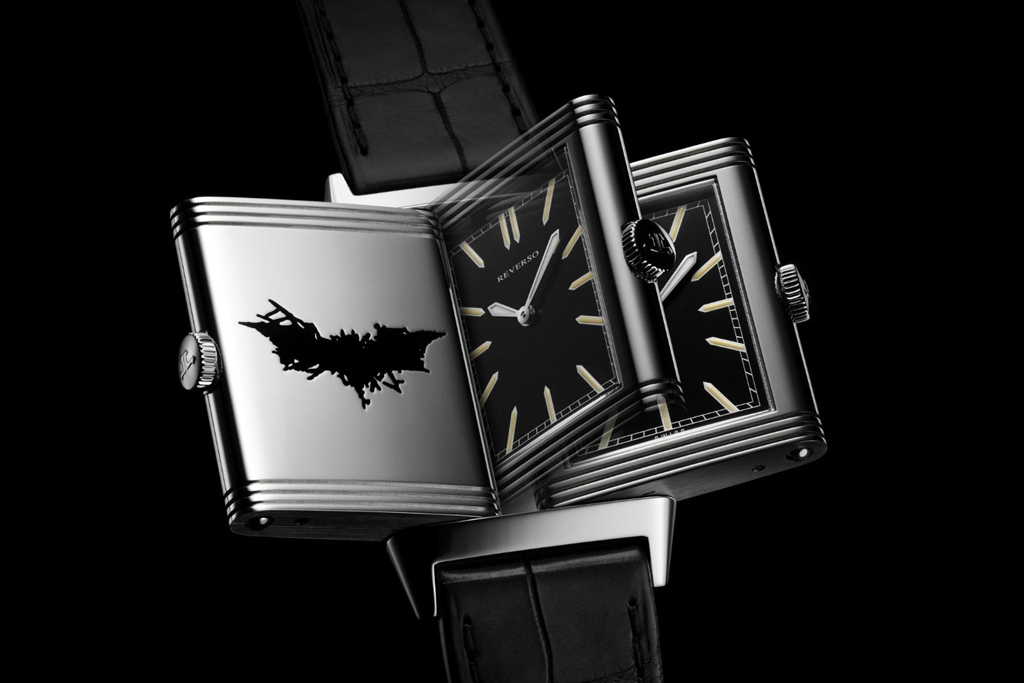 The Reverso is Jaeger-LeCoultre’s invention that has been unique and around since 1931. The Reverso is now considered the brands defining model, which is not a small feat for this premier manufacture. The name comes from the reversible case which allows the user to flip the dial over to a second face and show a plain side where owner can personalize watch by initialing, enameling, or engraving on it. In 1995, in “Batman Forever,” Van Kilmer in the title role wore the Jaeger-Lecoultre’s Reverso Grande Taille that had a personalized Batman logo engraved and lacquered on the case-back. The watch was often seen used as a communication mechanism with people’s faces appearing on the dial. Now 17 years later, Jaeger-LeCoultre continues the association with the Batman franchise. 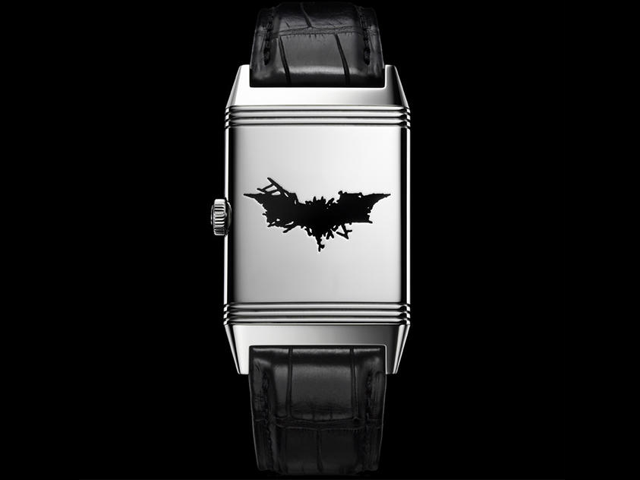 This very interesting and unique watch comes in a solid case that has a lacquered and an engraved bat logo on the back. The rear of this flippable stainless steel case is quite fascinating and easily recognizable. The dial of this beautiful watch is made in such a way that it canprotect itself from shocks. The dark dial nicely shows off the hour marks as well as the hour and minute hands. In early 1933, Jaeger-LeCoultre completed a caliber designed specifically for the Reverso. This Caliber 11 U is made of 15 jewel and has a power reserve of up to 50 hours. The watch also has18,000 vibrations per hour. This watch’s look is finalized with a nice black leather strap that complements the entire watch nicely. Batman and watch-lovers are surely going to love all the features of this watch.

Jaeger-LeCoultre’s Atmos clock was first introduced in 1928 and has been a classic ever since. Referred to as the “Clock of the Presidents,” it has been dubbed the official gift by the Swiss Confederation. Winston Churchill, John Fitzgerald Kennedy, Pope John Paul II, various U.S. presidents, and even Charlie Chaplin, were owners of the clock. Queen Elizabeth II has recently been added to the list of Jaeger-LeCoultre Atmos clock recipients. 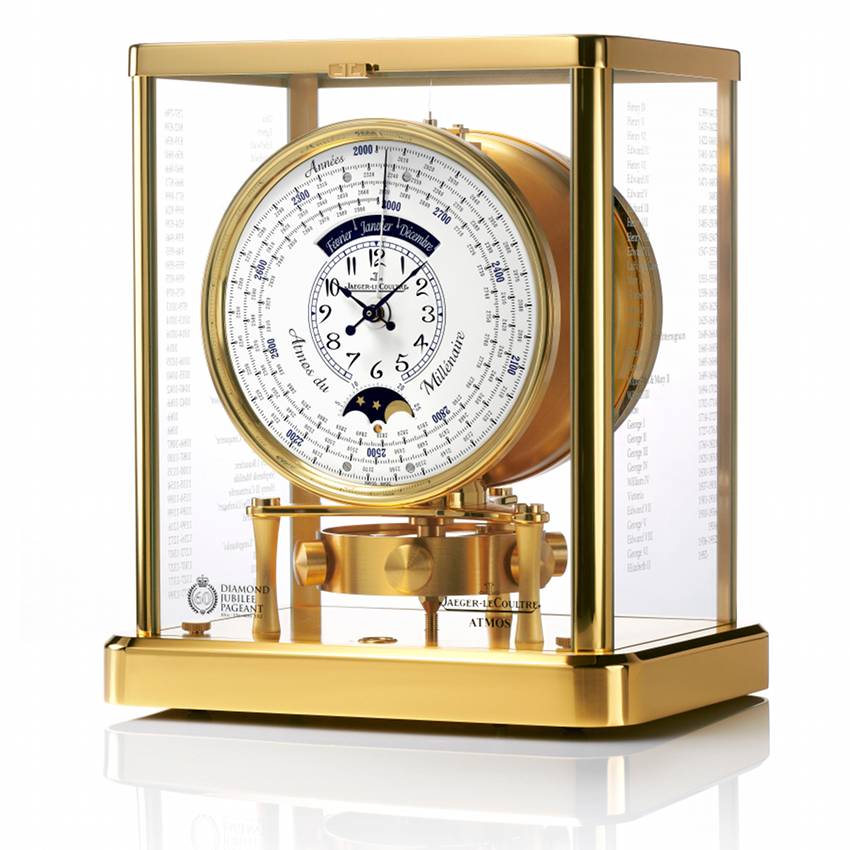 The Atmos technology does not require batteries, electricity, or old-fashioned winding. Instead, it uses a sealed capsule that gains its power from even the slightest change in temperature or atmosphere. Jaeger LeCoultre’s website states that “a difference of a single degree Celsius is enough to power it for 2 days.” Not only does the clock require hardly any maintenance, it is also environmentally friendly.

The theme of the Jaeger-LeCoultre Limited Edition Diamond Jubilee Clock is the lineage of the Kings and Queens of England, Scotland and Wales. On the top of the clock’s outer case is the British monarchy’s motto, “Dieu et Mon Droit” (God and My Right).

When Jaeger-LeCoultre designed the Atmos Du Millenaire Diamond Jubilee Clock back in 2002 for the All the Queen’s Horses event, only one was made. That clock was presented to the queen. This time around, three Jaeger-LeCoultre Limited Edition Diamond Jubilee Clock’s will be made. They will only be available in the United Kingdom. There is no telling who will acquire one of these exquisite and unique clocks, but Queen Elizabeth II is sure to be one of them.

The only location where these clocks can be found is in London at Wempe on New Bond Street, at Harrods Fine Watch Room. For those who can’t physically go to that location, the clock can be seen at Jaeger-LeCoultre’s official website.