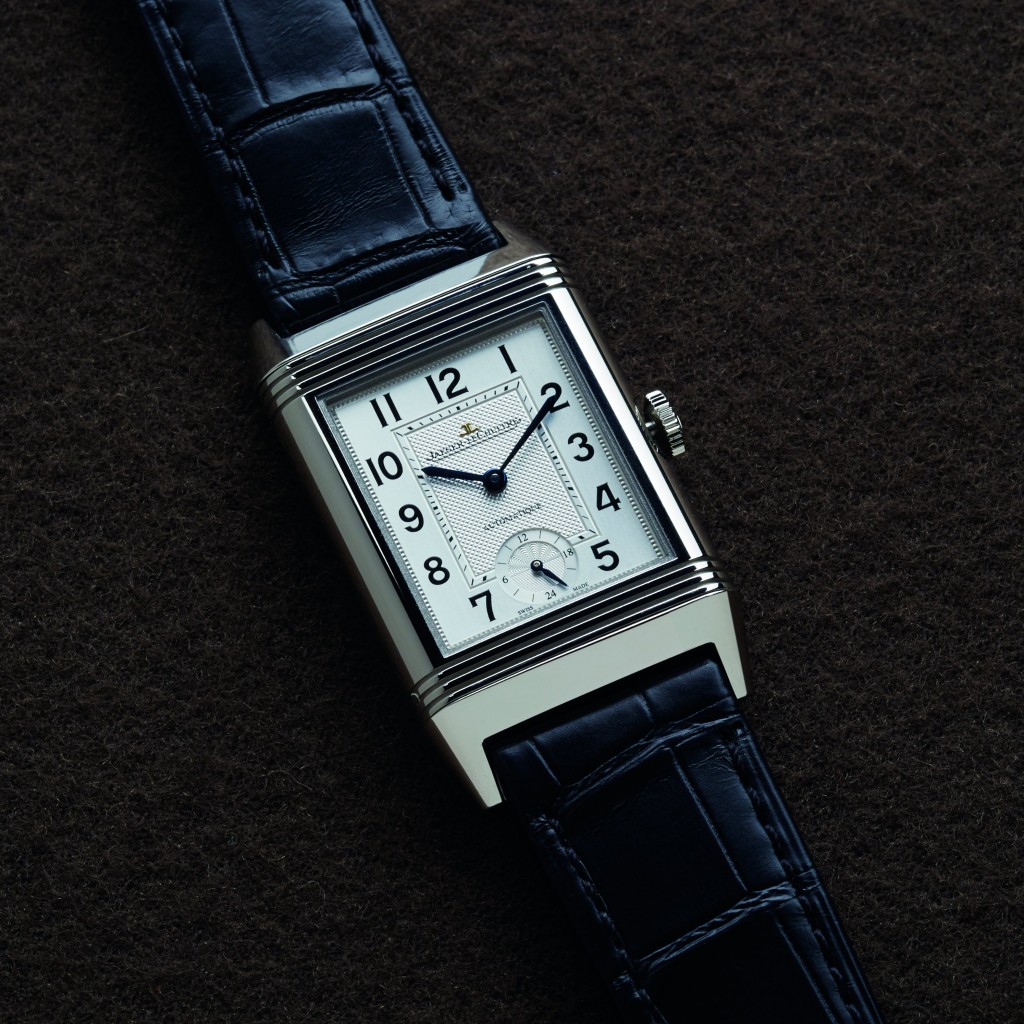 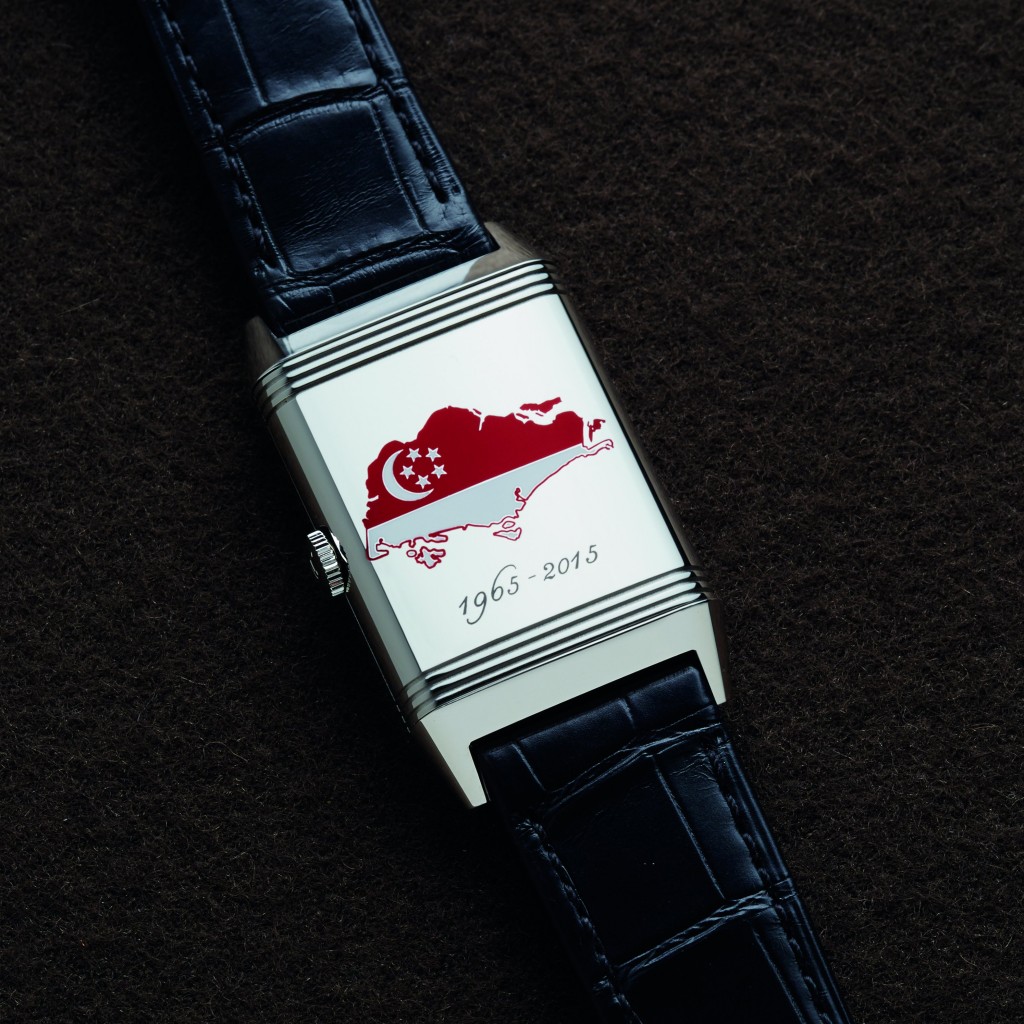 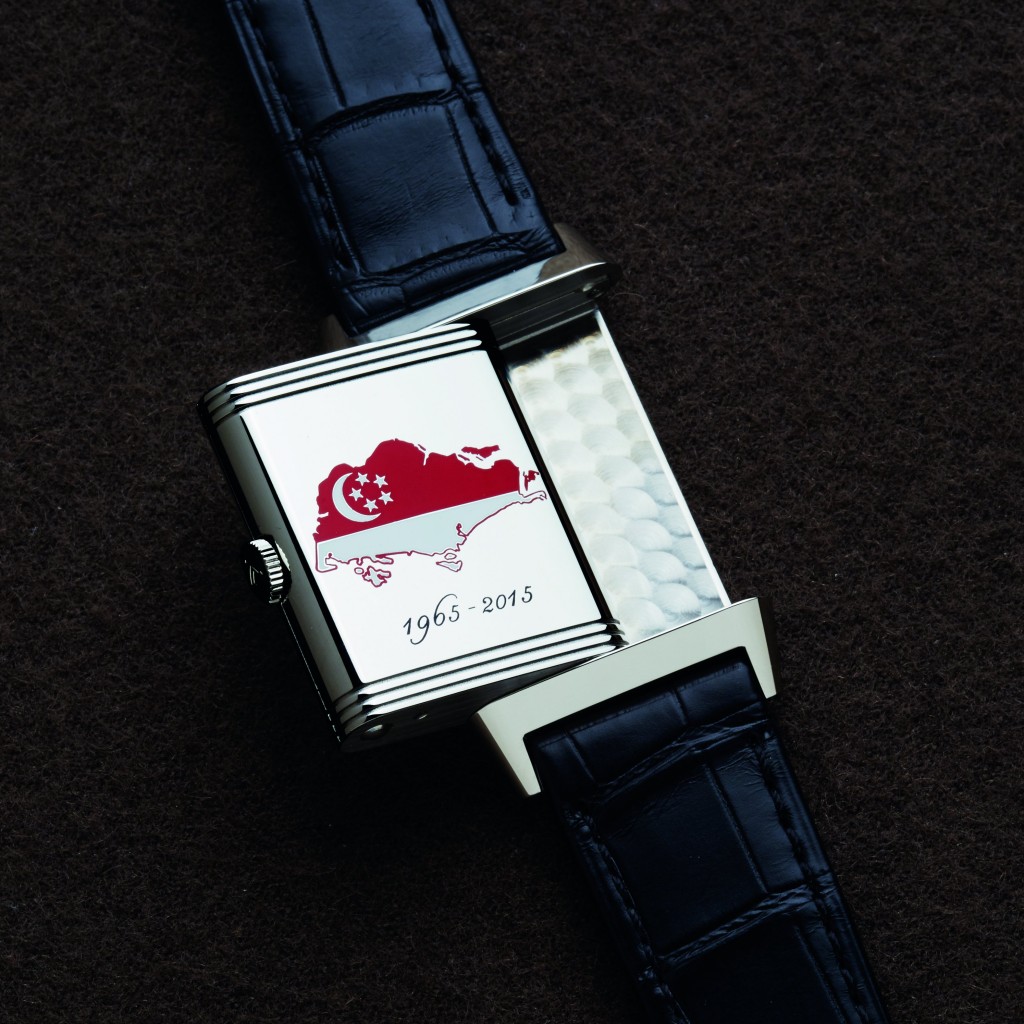 Grande Reverso Night & Day Singapore Special Edition is available in stainless steel or 18-carat rose gold cases, both measuring 46.8 X 27.4 mm and thickness of 9.14 mm. The dial present silver toned guilloche Clous de Paris pattern in the center surrounded by black Arabic numbers. A day and night subdial is located at 6 o’clock with an embellished inner circle which distinguishes the sun and night skies. The hour and minute baton hands are flamed blue, as is the day/night triangular indicator, all of which compliments the silver toned dial and stainless steel (or rose gold) case. It is dressed with a matt black alligator leather strap on the stainless steel model and a red alligator leather strap for the rose gold model. 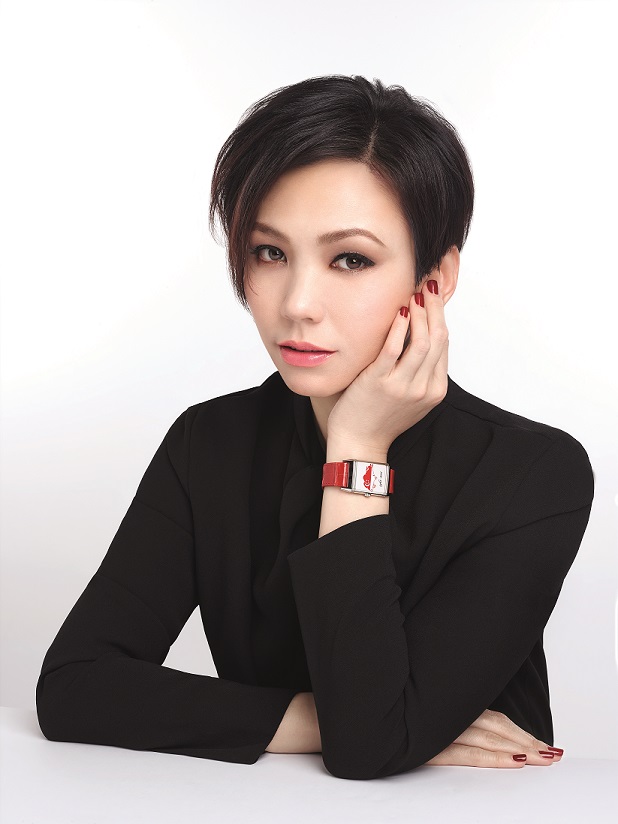 Grande Reverso Night & Day Singapore Special Edition is limited to 50 pieces and will be sold only at the Singapore Flagship boutiques in ION Orchard and Marina Bay Sands. Retails for $13,900 Singapore dollars.

To find your next Jaeger-LeCoultre watch visit www.watchesonnet.com.

This past week, Iron Man star Robert Downey Jr. was spotted at a press conference promoting his Iron Man 3 in South Korea. Dressed to the nines for the event, he was sure to don the Jaeger-LeCoultre AMVOX5 World Chronograph.

The Jaeger-LeCoultre AMVOX5 World Chronograph is one of just 300 timepieces in a limited edition. Crafted from ceramic and titanium, this piece contains all of the hallmarks of the AMVOX line with a few noteworthy additions.

The Jaeger-LeCoultre AMVOX5, like the rest of the AMVOX family, is inspired by the Aston Martin. The timepiece features white luminescent even numerals and odd hour-markers. These white numerals are set into a blue dial covered in a gridwork pattern reminiscent of the Aston Martin radiator grille. Additionally, the face of this timepiece possesses two subdials for time and chronograph functions, as well as a movement operating indicator the the 6 o’clock position. There are 24 city names printed on the inner bezel ring, symbolizing the 24 timezones across the globe. This allows for the wearer to know the time in any given timezone at a single glance.

One of the world’s most accomplished and respected designers, Marc Newson has designs all over the world. His work can be seen in major permanent museum collections including Museum of Modern Art in New York, London’s Design Museum, Centre Georges Pompidou, and the Vitra Design Museum. He has many accomplishments to his name, including being appointed Commander of the Order of the British Empire (CBE) by the Queen. TASCHEN is a worldwide art publisher founded in 1980 that specializes in books on art, architecture, design, fashion, film and travel. Prices ranging from very affordable to extremely expensive, TASCHEN has books and collections that range in topics for almost everyone.

In 2012, Marc Newson and publishing house TASCHEN released “Marc Newson: Works,” which catalogue all of Newson’s works to date. The 610-page comprehensive book is estimated to showcase 95% of all the work Marc Newson’s done in his lifetime. His works are listed in chronological order and put together by category, which include furniture, objects, timepieces, jewelry, photos, cars, sketches and other items. The book also includes an in-depth interview with Marc Newson that Gagosian gallery Director Louise Neri conducted.

The pieces featured include early pieces like the Lockheed Lounge and other objects like the Jaeger-LeCoultre Atmos clock. The futuristic metal lounger sold for over a million 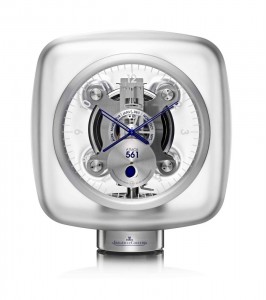 dollars at an auction at Phillips de Pury & Co. The Jaeger-LeCoultre ATMOS clock was initially created in 1938 and the ATMOS clock 551 and 566 are part of Marc Newson’s legendary design, which are shown in the TASCHEN publication. The world’s only clock movement that runs on thin air and without any need of human intervention for years, the ATMOS clock eightieth birthday in 2008 was celebrated by the creation of Atmos 561. This clock is suspended in a bubble block of Baccarat crystal and is designed by Marc Newson. This limited series and eightieth anniversary Atmos was followed two years later by the Calibre 566, which Marc Newson also designed. The Atmos 566 is limited to 76 pieces and made from clear or blue Baccarat crystal and also displays a current sky map. Newson is a big fan of the Atmos, and it is no surprise that he approached the company for collaboration.

If you are looking for comprehensive guide for Marc Newson’s works, this over 600-page book is a must have. It features an in-depth case studies into some of his famous works while celebrating all he has accomplished.

For the full collection of Jaeger-LeCoultre watches, Click Here visit our shop

Jaeger-LeCoultre packed up the best of its historical watches for exhibit at the SIAR fine watch fair in Mexico City. SIAR welcomed over 2,600 visitors and approximately 400 journalists for its 6th year of fine watch exhibition. Jaeger-LeCoultre displayed some of its most classical time honored timepieces of which included its original 1931 Reverso, the Reverso Gyrotourbillon, Reverso à Triptyque, Grande Tradition Grande Complications, Memovox, Futurmatic models, pocket watches and of course  its new Duomètre Sphérotourbillon.

The Duomètre Sphérotourbillon timepiece is based on Jaeger-LeCoultre’s unique revolutionary Dual-Wing concept line. Jaeger-LeCoultre premiered Duomètre à Chronographe in 2007, a spectacular timepiece equipped with two gear trains – one of which is dedicated to the hours and minutes function and the other to the chronograph, with functionality of measuring down to a 1/6th of a second. This phenomenal timepiece gave way to the introduction of the Duomètre Dual-Wing line, designed by Master Watchmaker Christian Laurent, which garnered much attention for its two distinct mechanisms (in effect two brains) housed under one case – notable for its enhanced watch accuracy. 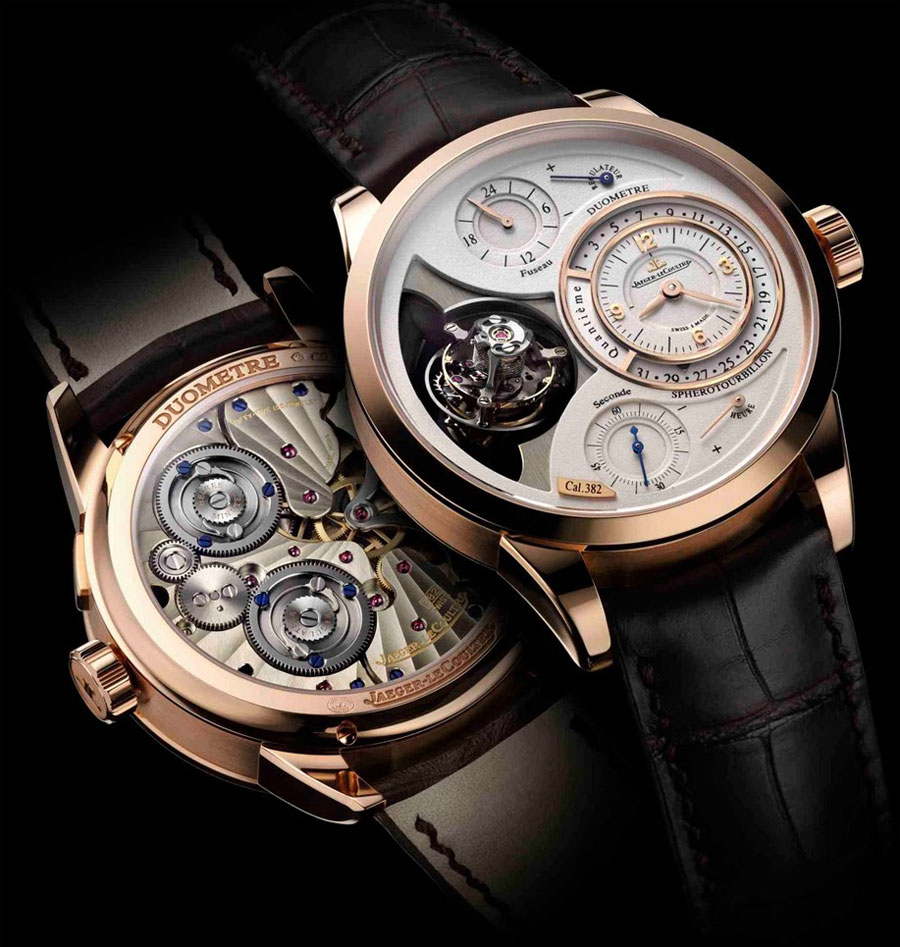 Duomètre Sphérotourbillon houses two axes which compensates for the effects of earth’s gravity regardless of the positions in which the watch may be held; and is also equipped with cylindrical spiral. Distinct characteristics of the Duomètre Sphérotourbillon include its independent seconds displayed at 6 o’clock on the watch dial and its capability to be reset to zero by pressing a push-piece at any time without interrupting the tourbillon.

SalonQP 2012 is the UK Watch Event to visit this year! That’s right end your year right booking a flight to attend the SalonQP 2012 event at the Saatchi Gallery in London November 8 – 10, 2012. 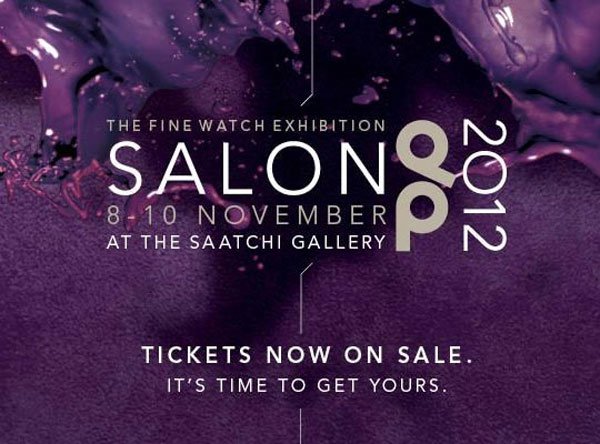 SalonQP 2012 event will be held for its fourth year at the Saatchi Gallery. The event will be hosted by QP Magazine, a UK watch magazine, lead by the magazine’s editor and SalonQP founder James Gurney. An enviable list of who’s who amongst luxury watchmakers will feature luxurious timepieces as well as a list of exhibitors of independent watchmaking brands. The list includes power names like Bell & Ross, Bulgari, Jaeger-LeCoultre, Vacheron Constantin, Christophe Claret, Sarpaneva Watches and Urwerks to name a few. For a complete list of confirmed watchmaker brand attendees go to http://www.salonqp.com/2012-exhibitors/.

Guests in attendance will have an opportunity to view rare timepieces, the latest models as well as meet the people behind some the world’s most exciting luxurious watch brands. A limited number of tickets are now available on sale for the VIP champagne and canapé reception on November 8. It is highly advisable to leap on purchasing these tickets today to avoid being disappointed. To book tickets visit www.salonqp.com or call 020 7428 2916.

Launching a new watch is TAG Heuer with its MikrotourbillonS. Urwerks will debut a new timepiece as well as British brand Meridian. Frederic de Narp CEO of Harry Winston will also feature a new timepiece at the event as well.

In addition to the SalonQP 2012 event, weekly competitions are being offered leading up to the actual SalonQP event. One lucky winner each week will win a prize. This week’s lucky winner will attend a Macarons and Martinis Masterclass event sponsored by Legend of Kremlin Vodka. The selected winner and along with a friend will enjoy whipping up tasty treats with the help of world-class pâtissiers. London mixologist will also teach the winner how to mix and shake the perfect Martini. Also up for grabs is a pair of ticket to one Masterclass, set to take place in Central London on Saturdays in the run-up to Christmas.

SalonQP is certainly making this year’s event enticing and well worth the trip to good ole London. Last year’s event included Rolling Stone Ronnie Wood. Don’t miss out on another exciting SalonQP event. The VIP Reception to be held November 8, 12pm-6pm will include a movie at 2:30 pm on George Daniels. A cocktail reception will also be held at 6pm-10pm.