IWC Schaffhausen Aquatimer Collection established the watchmaker’s focus on diver’s watches for 2014 which was introduced in its re-engineered design of the Aquatimer Deep Three revealing dual mechanical depth gauges. 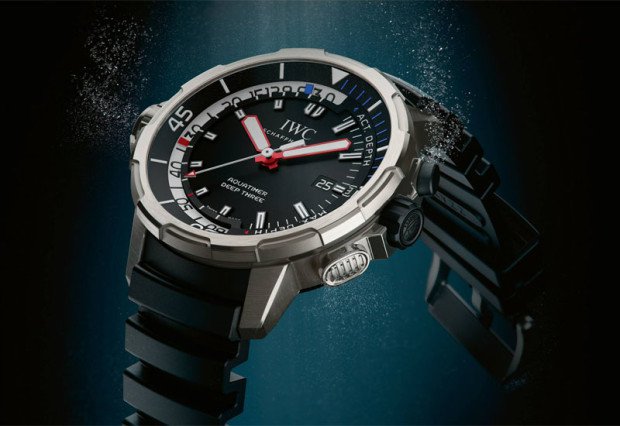 IWC presented the second redesign of the Aquatimer Deep Two in 2009, which spring boarded from the original design of Aquatimer Deep One watch presented in 1999. IWC engineered the Aquatimer Deep watches to specifically appeal to professional divers wanting a diving instrument that would work in conjuction as a mechanical support the event the dive computer system malfunctioned. 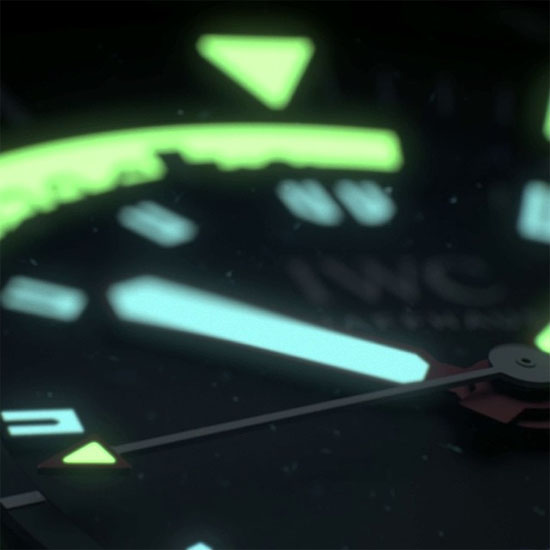 Deep Three’s developed pressure metering system functionality is impressive as it is powerful. Two mechanical depth gauges (one red, the other blue), glide along a depth scale located on the left side of the watch’s dial. A mechanical pressure metering system inside of the case, allows water to enter thru miniature holes in the cover of the pressure converter creating water pressure which acts on a spring membrane that pushes a shaft towards the interior of the watch case. A system of levers are enacted moving the gauge’s of the two indicators. The blue depth gauge indicates the current dive depth whereas the red depth gauge or maximum depth indicator indicates the overall depth achieved on a given dive up to 50 meters. (The maximum depth gauge can be reset by merely pressing a push-button next to the pressure converter.) 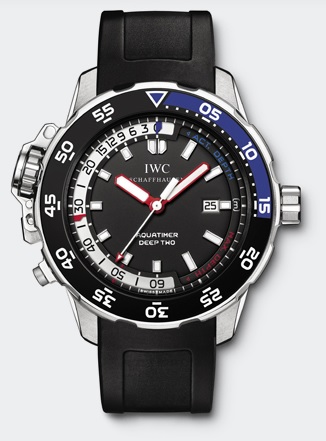 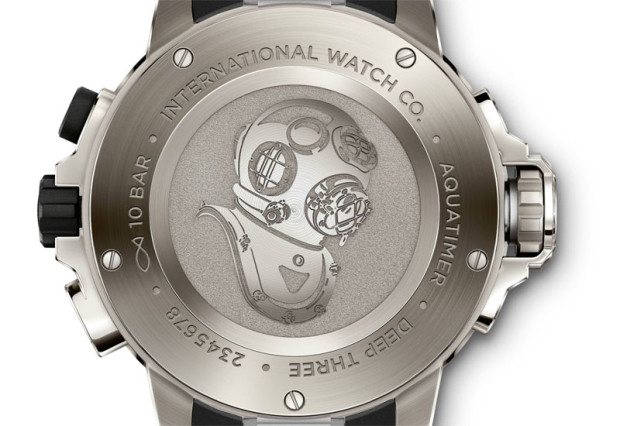 Aquatimer Deep Three dial show cases with a generous 46 mm titanium case which is 16.5 mm thick. Yes, this watch is exceptionally large, however that is the whole point of this professional diving instrument. Deep Three’s dial, internal bezel and hour/minute hands have luminescent treatments making it readable in the dark. It also has an external/internal rotating bezel and houses the automatic mechanical IWC caliber 30120 movement.  It is available with a black rubber strap and an optional stainless steel bracelet.

Aquatimer Deep Three retails for $19,100 and is by far one of IWC’s most spectacular timepieces.

To view a selection of IWC visit watchesonnet.com

The winning bidder will receive not only the amazing IWC Pilot’s Spitfire Chronograph Edition Tribeca Film Festival 2014 timepiece but also:

The Pilot’s Spitfire Chronograph Edition Tribeca Film Festival 2014 (Ref. IW387811) is a one of one timepiece valued at $25,000. Its unique features presented in a 43mm 18k red gold case complimented by a slate-colored dial which is contrasted by two bordeaux colored subdials, said to evoke the inspired images of the legendary red carpet of Hollywood.  It houses IWC’s in-house self-winding Calibre 89365 movement and has a power reserve of 68 hours.

The proceeds of the watch will be donated to the Tribeca Film Institute and the IWC Filmmaker Award, a grant dedicated to the next upcoming generation of filmmakers. Last year’s inspiring film winner was Jeff Malmberg for his documentary “Teatro”. Malberg will be present at this year’s “For the Love of Cinema” private dinner where he will share the progress of his documentary “Teatro”.

A selection of IWC watches can be found at watchesonnet.com.

“Hardly anyone goes to Rome without visiting Piazza di Spagna,” said IWC CEO Georges Kern. “We are delighted to present our mechanical masterpieces as well as the company’s tradition and philosophy in such a historic and prestigious setting.”

The new boutique is located in one of Rome’s most historic palazzi, and measures 40 square meters.  The boutique interior is decorated in dark woods, chrome, and leather.  These materials were chosen by IWC’s in-house architects to link together the elegant technology and deep heritage for which IWC Schaffhausen is known.  The boutique also takes advantage of the natural light filtered in from large store-front windows.

The boutique also features a large screen as it’s window display.  The screen will use moving images to illustrate the themed world that accompany the individual watch families.

The Roman boutique will be the first IWC Schaffhausen boutique in Italy, providing Italians with some of the best timepieces in the world.

IWC and Tribeca Film Institute have partnered to auction a unique Portuguese Automatic Edition watch, a perfectly timed tribute and countdown for the Tribeca Film Festival in New York.

The red carpet commendable one-of-a-kind Portuguese Automatic Edition proceeds, fetched at auction, will benefit the efforts and storytelling projects of the prestigious film institute as well as aspiring local talent in the film industry.

IWC is proud to partner and support the film making efforts of the Tribeca Film Institute. IWC correlates film and time as essential elements that work harmoniously behind the scenes to provide an amazing time honored deliverable in the form of film. What better way to celebrate the upcoming Tribeca Film Festival than to debut a star studded “Unique Piece” specially designed to articulate the profound visual arts of the film industry.

Portuguese Automatic Edition (Ref. IW500127) makes it star studded debut with a 42.3 mm diameter platinum case (a rarity for the Portuguese Collection) complemented by a slate-colored dial. Notable are both of its bordeaux-colored sub-dials, said to be iconic of Hollywood glamour and red carpets. The sub-dials contrasts harmoniously with the slated-colored dial displaying seconds at 9 o’clock and power reserve at 3 o’clock.  It further accentuates it award winning presentation with hands, numeral and hour appliqués in red gold, along with a rotor with 18-carat gold medallion bearing the Tribeca Film Festival logo and the engraving “EDITION 2013 – UNIQUE PIECE”.

Portuguese Automatic Edition is scheduled to make its red carpet auction debut on April 10th at the Antiquorum on Madison Avenue in New York. Anyone interested in placing a bid on this unique timepiece may register to participate in the auction up until April 9th at Antiquorum.com.

Portuguese Automatic Edition is awaiting an opportunity to exhibit its time stellar performance for a generous philanthropist whose winning bid will not only claim an incredible timepiece, but support the amazing storytelling art and film productions of the Tribeca Film Institute.

The Tribeca Film Festival is scheduled to commence April 17-28 in New York.

IWC unveiled a new timepiece to mark its cooperation with the Mercedes Amgpetronas Formula One Team. This watch, selected by NBA star Carmelo Anthony, is the IWC Ingenieur Automatic Carbon Performance. This model will be available in limited edition of only 100 pieces.

The Ingenieur Automatic Carbon Performance comes in a carbon case that measures 46 millimeters in diameter. The middle part of the case is held together by screws and is manufactured using fibre matting, which is soaked in epoxy resin and shaped in a desired form before being heated at high temperature and pressure. This is the same technique used in monocoque of a racing car. To keep with the theme of motor-sports, IWC designers have used ceramic for the screw heads, the crown and crown protection. The screws and case-back ring are made of titanium. The watch comes with a black rubber strap with stamped calfskin inlay and titanium pin buckle. The stitches on the strap are either yellow or red nylon reminiscent of the stripes on the walls of the soft slick tires.

The dial of this Ingenieur Automatic Carbon Performance is also made of carbon fiber. While carbon is only one-fifth the weight of steel, it does not have as much resistance to scratching. The black dial features under and over technique to create webbed design pattern and gives an authentic Formula One look. The dial has an impressive three-dimension look. A date window is visible at the 3 o’clock position. The hours and minutes markers as well as the hour and minute hands are luminescent and easy to read.