To celebrate the 25th anniversary of its popular Saratoga watch collection, Concord has recently reintroduced the line. The twenty new models from Concord were premiered in the capital city of Doha, Qatar. The Swiss company describes the new Saratoga line as a fusion of past and present, incorporating their traditional designs and elegance with modern fashions.

The new timepieces all include a stainless case, a Swiss quartz movement, and the faces are made of sapphire crystal with anti-reflective treatment. The main models come in at 9.15 millimeters tall with 40 millimeter diameter cases. The designs are offered in the style of silver or black mosaic grains d’orge guilloche patterned dial. There is also the choice of dark blue or white mother of pearl dial sets. The deployment clasp is also stainless steel to match the case, and each Saratoga is water-resistance to 50 meters (3ATM). The Concord Saratoga traps are generally platinum.

The women’s Saratoga model is similar, but is offered in a white or pink mother of pearl dial setting. Slightly smaller than the men’s model, the women’s models all range in the 31 millimeter diameter range for the watch face, and include the offer of six diamonds set on alternating hour markers, which have a total weight of 0.9 kt.

The Concord Saratoga collection also offers models with an 18k white or rose gold chain and diamond inlay. The reference price for these models is around $933,000 for the platinum models and $1,023,000 for the white/rose gold models. The Saratoga series includes with each purchase a patented crown protection device, and every timepiece is delivered in handmade wooden boxes with full certificates. 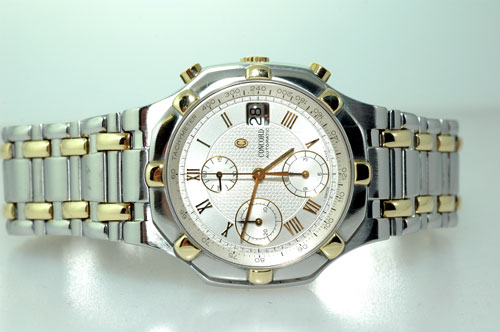 From its introduction in 1986, the Concord Saratoga has been designed to be sporty and trendy. The series is named after the thoroughbred horse racing track in New York called Saratoga Springs, where the elite gather to place bets, often sporting Concord watches. This particular track was selected for its history, as it is the oldest official organized sporting venue in America. Concord is also heavily allied with horse racing in the Middle East, hence the Qatar opening. Through both of these associations, the Concord Saratoga has made a name for itself in horse racing circles as a high-class luxury sports watch. Internationally recognized, the Concord Saratoga series blows away competition due to the high-quality work and traditional design work put into each individual timepiece. The high profile clientele in the Middle East have been very loyal to the Concord brand, as horse racing is a passion among many there. 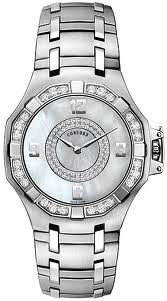 Concord just happens to be one of the top watch designers of 2012. Today we will take a look through this luxurious brand’s history to discover what makes Concord one of the best designers in the world.

Most fine watch makers manufacture right out of Switzerland, even still today. It’s no wonder than that Concord was established in Biel, Switzerland in 1908. When Concord first started making watches they had American customers in mind and one can still notice that through the brand’s designs even today. Concord is known as being the first “private label” luxurious watch brand to add gems and precious metals to its watches. The Concord brand has also earned the title of being the first watch designer to make a wrist watch made entirely of coins.

Concord made another “first” in 1979. Concord designed the Quartz ultra-thin dress watch, the Delirium, which at the time, was the thinnest time piece to ever be made. The watch measured at 1.98 millimeters thin. Later on, a Delirium 2 was released which happened to be even thinner than the first, measuring at 1.5 millimeters. Before 2007, Concord was best known for also manufacturing the Mariner which was specifically made for the sports and activity watches market. The La Scala targeted the contemporary luxury time piece market and the Saratoga targeted the luxury sports watch public.

The Concord company had a major change of vision in 2007. Concord closed several dealerships due to slow sales and lack of customers. This caused a large gray area in the company’s market and damaged Concord’s reputation. Concord targeted the luxury sport market when they released the C1. The C1’s style and pricing was meant to compete with luxury time pieces such as Audemars Piguet, Hublot and Panerai. The C1 is best described as an extremely large sports luxury watch. From 2007 to present, all Concord models are based off of the C1’s base case design. Concord only has a couple hundred dealers left around the world and was hoping to earn a new name in the world of fine watches. Concord designed two new C1 watches in 2008, the C1 Gravity Tourbillion and the C1 Worldtimer. The C1 won the impressive “Grand Prix d’Horlogerie de Geneve” as “Best design of the year 2008.” The C1 is sure to be a watch of 2012, attracting more fans.

Concord gained a new worldwide CEO, Alex Grinberg, in 2009. Grinberg continues to do an outstanding job as CEO for Concord to this day. Concord customers eagerly wait to see what Grinberg will do for 2012

Today, Concord is included as a member in the Movado group. This group is also known for owning Ebel, Coach, Movado, ESQ, Juicy Couture Watches, Tommy Hilfiger, Lacoste and Huge Boss watches. These watch companies continue to make a large profit in the luxury watch market for 2012 and are very popular amongst the public.

Concord continues to slowly make history. Any of their watches can be purchased at any of the remaining Concord dealerships that are scattered all over the world. It will be interesting to see if 2012 is the comeback that Concord has been waiting for.

Late in 2011, Concord announced that they were joining forces with a new celebrity brand ambassador, and that ambassador is professional golfer Álvaro Quirós. The pairing is an apt one, as Concord’s playful inventiveness is one of its strong points, just like Quirós’ reputation has, over his career on the professional circuit, become one of a relaxed but extremely powerful individual. Quirós recently had the pleasure of showing exactly what he is capable of on the links when he won all three European Tour desert events, earning the 28-year-old a place in golf history as the first golfer to do so.

According to Concord’s website, “in the closing event of the PGA European Tour, the Dubai World Championship, Spanish golfer Álvaro Quirós – who signed a partnership agreement with Concord in September 2011 – made a magnificent showing to win the title on Sunday December 11th. He finished at 19 under par after carding successive rounds of 68, 64, 70 and 67, ahead of a star-studded field including world number 1 Luke Donald, who took third place.” Concord has surely chosen just the kind of talented, driven fresh face that they hoped for.

Quirós turned professional in 2004 and has earned multiple titles since then, including first place finishes in the Portugal Masters and the Commercialbank Qatar Masters. In 2011, he tied for 27th place in The Masters and tied for 54th in the U.S. Open.

Quirós decided to become the face of Concord in part because he “likes the design of Concord watches because they are very elegant while still young and fresh,” as the golfer has said in the past.

According to a press release on the Concord site, the watch brand has been exceedingly supportive of their new face. When Quirós officially earned his title, “the brand’s agent in Dubai, Ahmed Seddiqi represented by Mr Mohammed Seddiqi, CEO Christophe Nicaise and Concord Regional Sales Manager Abdallah Mouaffak made a point of personally visiting the event to congratulate Quirós on his stellar performance.”

Not only is Quirós representing Concord in a very favorable light, but his success has afforded the brand the chance to show its fans just the kind of people that run the company. If their enthusiasm for Quirós’ success is any indicator, they are just the kind of genuine individuals watch-wearers can feel confident in supporting.

Since 1908, Concord has been making luxury timepieces that are truly innovative and unique. Concord was the first brand to design a watch made of coins, as well as being one of the first private label luxury watches to incorporate precious metals and gems in its watches. Concord also made news with the Delirium Watch in 1979 which was the thinnest watch ever made at the time at 1.98 mm. Subsequently, the Delirium 2 was made at an even thinner width at 1.5 mm. Another unique aspect of Concord’s design philosophy is that although they are a Swiss company, they have always designed their watches with the American market in mind.

Although Concord watches had made a name for themselves with their luxurious and innovative watches, they along with other companies have long utilized a powerful brand ambassador and recruited Spanish professional golfer Alvaro Quintos to be the face of Concord in 2011.

Alvaro Quintos is a young innovative man himself. He recently achieved the great accomplishment of being the first man to win all three European Tour desert golf events. Quintos previously won titles in the 2009 Commericalbank Qatar Masters and the Omega Dubai Classic in addition to the season-ending Dubai World championship.

Per the Concord Facebook page featuring their partnership with Quintos; Concord is genuinely proud of this promising new affiliation with Álvaro Quirós.  Quintos has said that “likes the design of Concord watches because they are very elegant while still young and fresh.” Quintos, who is often referred to as a “power hitter”, has become widely appreciated for his relaxed and natural attitude on and off the golf course.

He will be ably representing the brand on golf links around the world – and at various press events where he will be able to share his enthusiasm for his discipline with golf aficionados around the globe. Concord goes on to say that both parties in this collaborative partnership are involved in fields where patience and perseverance are harmonized by boldness and inventiveness.

This could not be truer in the case of Quintos and Concord. Both factions are known for being professionals and making headlines in their respective fields at an early age. Both Concord and Quiros are innovative and unique. There is no doubt that both parties will continue to impress the masses with their talent, dedication to their craft, and commitment to perfection.