Movado has partnered to serve as the lead sponsor for the Jazz at Lincoln Center Youth Orchestra Inaugural Season which includes two performances at world-renowned Carnegie Hall March 23, 2014. 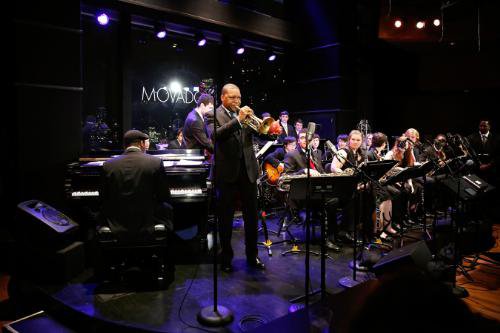 Mary Leach, Movado Group, Inc. Chief Marketing Officer expressed excitement about the sponsored initiative with the Jazz at Lincoln Center Youth Orchestra, Wynton Marsalis involvement in support of the arts and his active role supporting the musical performance of the talented youth orchestra.

Wynton Marsalis is serving as the Managing and Artistic Director overseeing the youth orchestra’s musical education along with members of the Jazz at Lincoln Center Orchestra and Vincent Gardner, Director of the Jazz at Lincoln Center Youth Orchestra. This dynamic trio is working with the students in rehearsals familiarizing them with big band repertoire and performance techniques in time for five additional concerts in their first season, including their two performances at Carnegie Hall where the youth orchestra will perform Duke Ellington’s music.

Movado is known for its association with the performing arts and innovative Modernism designs, an integral part of its established branding for 132 years. Movado has been a key supporter of the Jazz at Lincoln Center, Lincoln Center for the Performing Arts, The John F. Kennedy Center for the Performing Arts and the New York City Ballet. Other supported performing arts on Movado’s vitae include Ballet Pacifica, the Cooper Hewitt, The Joffrey Ballet, Miami City Ballet, Miami International Film Festival, and the National Design Museum.

Check out a selection of Movado, Concord and Ebel watches at www.watchesonnet.com.