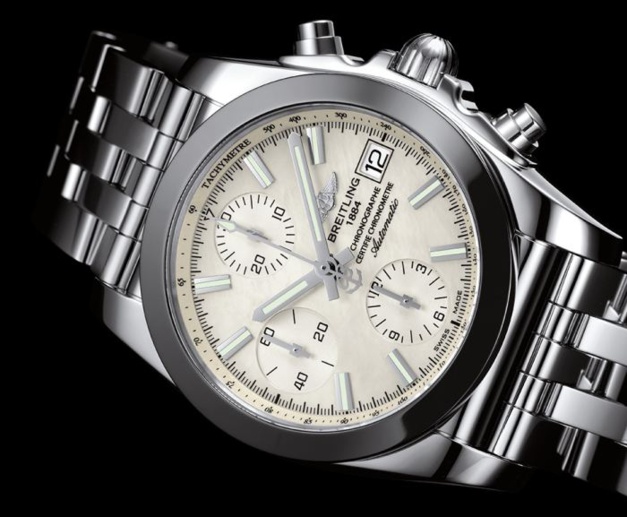 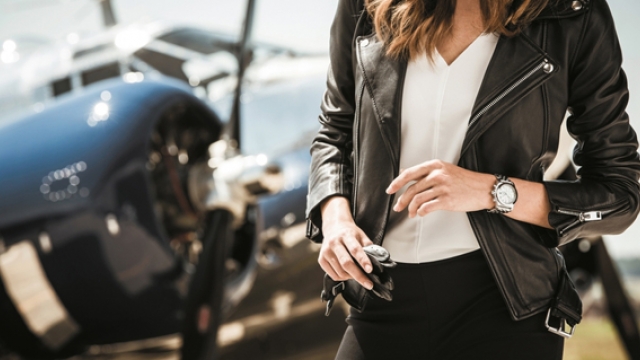 Breitling Chronomat first appeared in 1984 as a precision instrument designed specifically to cater to the needs of elite international pilots. Breitling re-envisioned this precision model to produce a sleek yet elegant watch that enraptures feminine wrists in a contemporary yet commanding style.

Chronomat 38 SleekT classic momentum take off in a 38mm diameter case with a dual sided glare-proofed sapphire crystal which is complemented by a high-tech, ultra-hard and scratch resistant smooth bezel made of tungsten carbide. Select dials are offered in a bold black lacquered or exquisite mother-of-pearl dial with or without diamond hour markers, as well as an optional diamond-set steel bezel model. The dials along with the tungsten carbide bezel harmoniously contrasts with the watch’s satin polished steel case, which is dressed with a stainless steel bracelet giving the watch an elegant sporty edge (a gold leather crocodile strap version is also available).

Chronomat 38 SleekT still delivers its original precise performance with a self-winding chronograph movement chronometer-certified by the prestigious COSC. Breitling designed this enigmatic Chronomat 38 SleekT for that on-the-go professional woman that is as in command of time as she is of her professional schedule and personal lifestyle – all precisely timed in elegant sporty style. 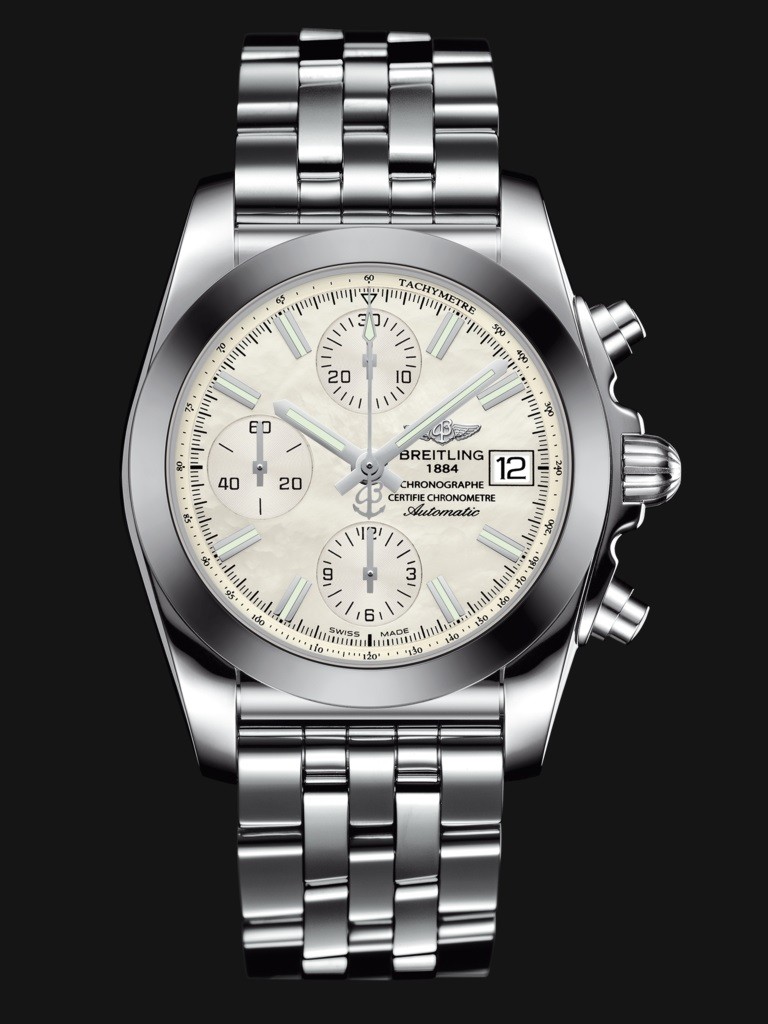 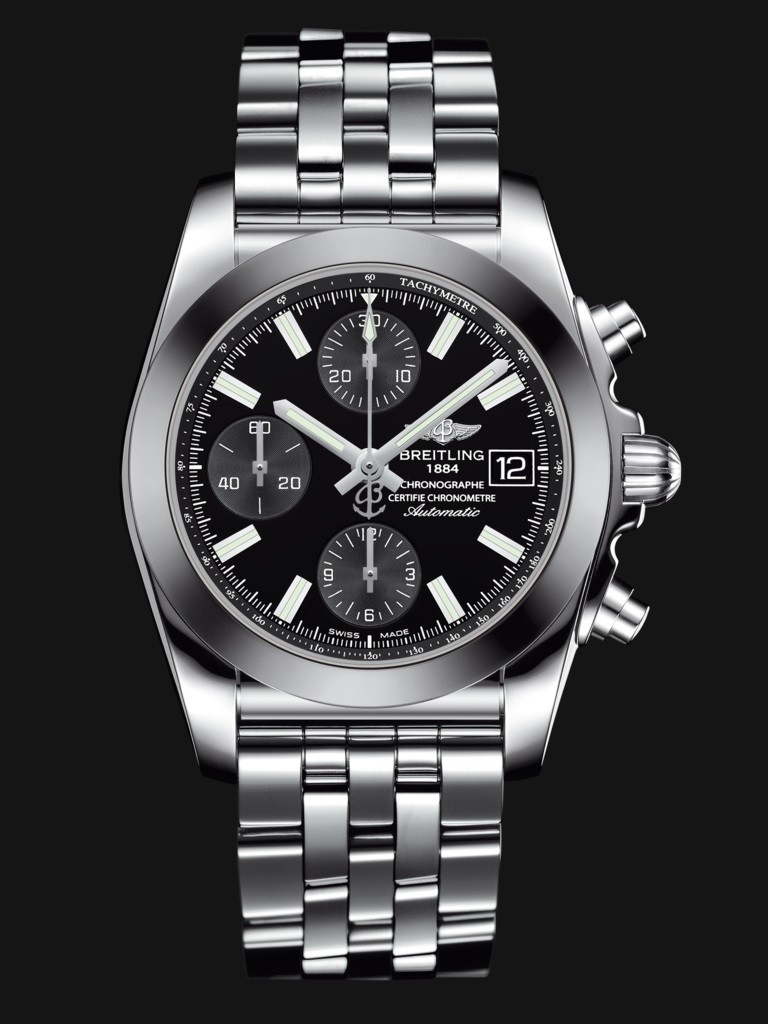 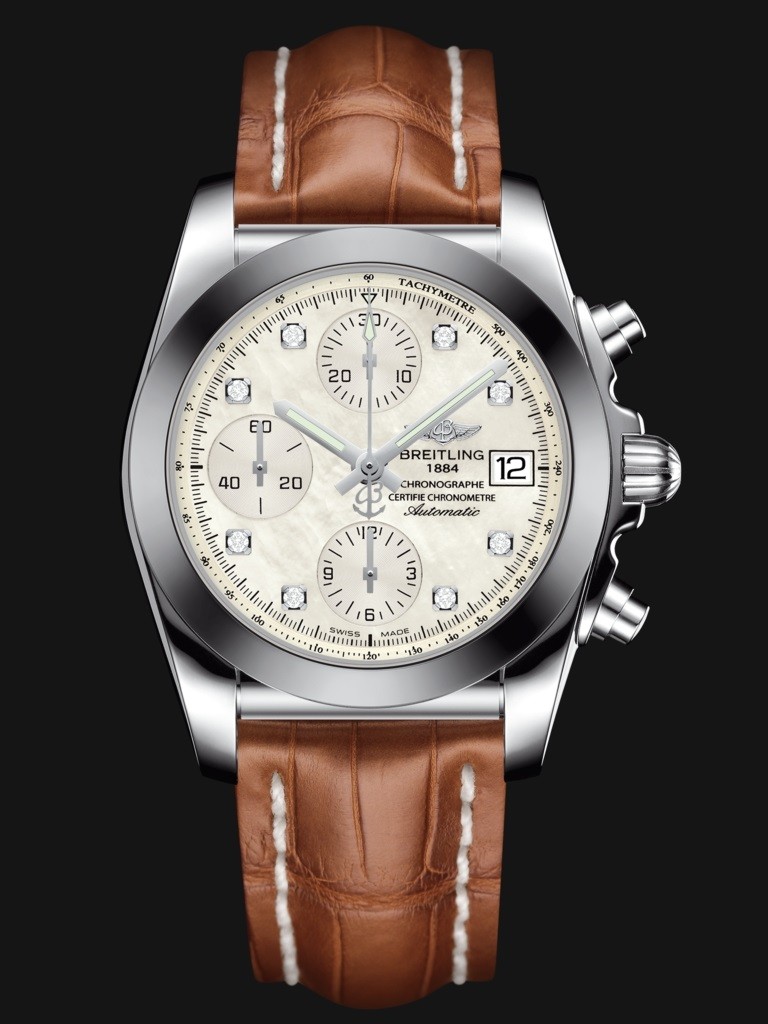 Cartier watches has outdone itself again in 2012 with its released of new watches for the year. This line-up of spectacular timepieces is sure to impress anyone who witnesses them.
At the beginning of each year, watch manufacturers expose the public to the newest innovations and most interesting changes in their watch collections. Cartier has blown the competition out of the water with the releases for the 2012 season.
The most intriguing watch put out by Cartier so far this year has been the Rotonde De Cartier Flying Tourbillion Watch. This watch has a magnificent look to it, keeping with the style of all Cartier watches. Cartier has always been know for its inventive style and the watches for 2012 keep that tradition going.
Cartier puts care and the utmost quality into every timepiece they craft. The Rotonde De Cartier Flying Tourbillion Watch parallels that idea. The line is limited to only 100 timepieces produced. It is sure to be a hot commodity wherever it is sold.
The frame of the watch is in the famous flying tourbillion skeleton style with the dial having hallow parts which give the watch a unique style that will be all the rave amongst your friends. The case is made of 18k pink gold to accentuate the features of this tremendous timepiece. The Rotonde De Cartier Flying Tourbillion also features sword-shaped hands made from blue-steel and a double adjustable deployment buckle in 18k pink gold to help keep this magnificent piece of craftsmanship on the wrist.
This timepiece has everything a watch lover needs, unique artistry and reliable time keeping. Cartier has always been know for putting out a superb product and this Rotonde De Cartier Flying Tourbillion is no exception. Even the skeleton design on the dial has this watch exuding elegance and top of the line material and craftsmanship.

Cartier has been a symbol of fine timepieces since 1847 when the founder Louis-Francois Cartier took over a jewelry shop and began making luxury watches. The first big splash Cartier made was a sell to Princess Mathilde, niece of Napoleon I. The watch manufacturer never looked back. The watch company has been expanding its product ever since the first timepiece was completed. Today, Cartier is an international sensation selling luxury timepieces in over 15 countries.

As the new year commences, Baume & Mercier decided to bring out a few new additions to their successful Linea Collection.

The woman’s luxury watchmaker is excited to showcase these new watches and add them to an already delightful line of fine timepieces. The Linea Collection is renowned for its high fashion and applicable watches. There is a watch in this collection that will fit any ensemble.

Baume & Mercier has become synonymous with quality since the company was founded in the small Swiss village of Les Bois in 1830. They have been pursuing the height of perfection with their watches.

The new additions to the Linea collection are no different. The Linea Collection line has some interesting aspects to it as well as the desirable quality of craftsmanship. No longer will someone have to choose between a watch dial because of how the strap looks. The Linea lines come equipped with interchangeable straps so the watch can match any occasion. This is a revelation for those who do not wish to purchase multiple watches just to match the outfit they will be wearing. The interchangeable strap is another great feature on an already magnificent line of watches.

The newest Linea watches have a diameter of 32 mm for easy viewing of the dial. They also feature automatic movements and sapphire case backings so the owner can gaze into the beautiful watch and see how the components work together perfectly and keep time as well as being a stunning piece of jewelry. The dial is comprised of Gilt hands and Gilt riveted indexes. Its finish is a sun silk satin and snailed silver-colored. It is water resistant up to 50 meters just in case a late night swim because a part of the evening. All the interchangeable straps are polished or satin-finished two-tone accompanied by a triple folding clasp to keep this wonderful timepiece elegantly attached to the wrist.

This year marks the 25th anniversary of the Linea Collection line and these new watches are a welcome addition to an already stellar series of timepieces. Baume & Mercier has once again produced beautiful pieces of art which just so happen to also tell time.

PARIS – Bell & Ross Time Instruments was on hand for year number 27 of the International Automobile Festival in Paris, France on January 25. The watch maker was there to present the Palme d’Or award and show off its exclusive watch collection.

This year the Festival was held at the luxurious Hotel des Invalides, near the famous Dome of the church right next door. The Festival is held to show off new concept cars from different manufacturers and to celebrate automotive innovation. Bell & Ross were there to strut their stuff along side auto manufacturers with their new exclusive line of watches.

The watch company also unveiled something that France had never seen; a new kind of item thatBell & Ross is not know for, a Harley Davidson. Bell & Ross teamed up with Shaw Harley Davidson and created the Nascafe Harley Davidson bike. The motorcycle has won many Custom Harley Davidson championships in the US and was well received by everyone at the International Automobile Festival.

The Festival also bring out an exclusive watch collection from Bell & Ross each year. This year the watches were on display and available for purchase to anyone with the inclination to own such a luxurious timepiece.

Of course Bell & Ross was not only there to have fun and show off their award winning Harley, they had an award to present. CEO of Bell & Ross, Carlos A. Rosillo, presented the Palme d’Or to the Red Bull Racing F1 team who took the 2011 Championship title won by German driver Sebastien Vettle. The team’s owner, Dieter Mateschitz met Rosillo on stage to accept the award for his team.

French driver for the Citroën World Rally Team Sebastien Loeb was also presented with an award. Loeb has won the World Rally Championship (WRC) a record eight times in a row.

Rosillo is also a member of the jury which decided on 14 prizes championing the work of companies and people including the Palme d’Or were handed out at the Festival. A little more than 600 people attended the event in Paris.

The event celebrated 2011s innovators in the automotive field. The new years concept cars are unveiled and any new idea that involves automobiles will be brought to the floor. It has become a place where the future of the industry is born each year anew. 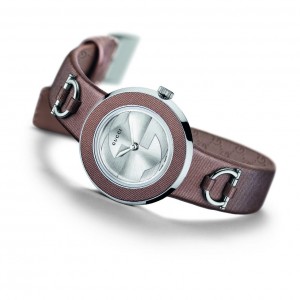 The U-PLAY collection is know for it’s interchangeable parts and unique design. The owner can mix and match most parts to make the watch their own. The bezel and straps can be interchanged depending on the occasion or attire being worn. This is one of the many great attributes this GUCCI Watch collection offers.
GUCCI Watches has gone back in time with this collection. The interchangeable bezel was once all the rave in watches, and the elegant GUCCI has brought it back into style. The U-PLAY collection is one of the most intriguing and fun lines that GUCCI Watches offer.
The watch was designed by GUCCI creative director Frida Gianni. The watch comes with a red Guccissima leather strap, with the iconic double “G” pattern appearing throughout. The double “G” also appears on the inside of the strap, giving the entire band an authentic GUCCI look. The bezel is set with the GUCCI signature markings and encased by a bold red outline. The double “G” dial is stainless steel and shines brightly with the the marking of “GUCCI” at 12 O’clock. The “Swiss Made” marking is at 6 O’clock to let the owner know the fine quality of craftsmanship that went into the watch. The hands are slim and tapered, elegant enough for any wrist. The watch is run by reliable Swiss quartz movement and is waterproof for up to 30 meters.
Of course the strap and bezel can be changed at any time, but the red is suitable for a Valentine’s Day gift. The bright red throughout the watch complements the stainless steel dial and will bring a smile to anyone’s face. The gift is perfect for anyone looking to show their love and passion for those most important in their lives.
The watch offers the best in quality and style for a great price. GUCCI Watches has been producing amazing timepieces for some time and this U-PLAY watch collection is no exception. With the versatility and well made craftsmanship you expect from GUCCI, this U-PLAY collection Valentine’s Day watch will become an important piece in anyone’s ensembles.