TAG Heuer MIKROGIRDER is impervious to gravity reducing isochronous error. It is capable of precisely measuring time to 5/10,000th of a second . Mikrogirder also features a new mechanical regulator – cultivated from three centuries of hairspring/balance wheel mechanical regulators. TAG Heuer’s latest introduction of its impressive 5/10,000th of a second chronograph beats at 7,200,000 beats per hour – such amazing technical features that undoubtedly contributed to its win for the Best Technical Innovation Award. 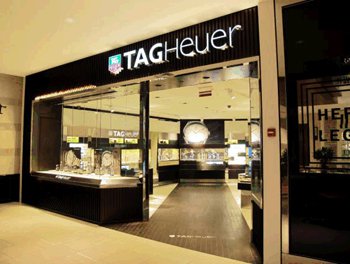 Tag Heuer has opened its second boutique on Monday, January 23rd  at the Aventura Mall in Aventura, Fla.  This store opening comes consecutively after the opening of their first freestanding store in Las Vegas in March 2011.The store is an estimated 800 square feet and will be placed in Aventura Mall’s new luxury wing.

Tag Heuer boasts about 115 stores internationally. According to Alyssa Mischon, Tag Heuer’s vice president in charge of strategic and marketing planning for their North American sectors Miami is among their top markets within the United States. Their high level of tourism and their constantly growing consumer base within the community are cited as possible reasons for such a booming market for Tag Heuer in this region.

Aventura Mall receives an estimated 24 million visitors a year. Often times these visitors are international customers. Mischon cites the steady inflow of customers of Aventura Mall as the perfect venue to attract even more customers whether international or Miami residents and US citizens alike. Tag Heuer has much success with their wholesale businesses. However, from their success in Vegas, they’ve noticed many dedicated shoppers desire to shop within a brand store.

The Aventura store was designed by award winning architect Eric Carlson.  Its appeal parallels that of the brand’s worldwide concept. Instead of watches being traditionally encased in traditional counters common to many jewelry and watch stores they are displayed at eye level for the customers to get a more intimate gaze at them throughout the store.

Tag Heuer has plans on adding another door this coming spring in Orlando Florida.

While many luxury watchmakers can boast celebrity ambassadors, TAG Heuer, the high-end Swiss company best known for its sports and stop watches, can be said to have one of the most enticing—Leonardo DiCaprio.  The heart throb turned Oscar winner has contributed considerably to the company’s success, as well as to the environment.  It only made sense that the conglomerate and film star work together to create a timepiece that is as charitable as it is chic—the Aquaracer 500M.

DiCaprio is a passionate philanthropist who has typically used his stardom for good, involving himself in environmentally friendly activities from donating to relief efforts in Haiti to freeing a Tiger in Russia.  After signing on with TAG Heuer, a company that claims commitment to the environment as well, the two decided to work together to create a special edition automatic watch which will generate royalties for the Natural Resources Defense Council (NRDC) and Green Cross International.

The timepieces, officially called the TAG Heuer Aquaracer 500M Leonardo DiCaprio Limited Editions, are designed based on sustainability and “green” manufacturing, including criteria such as

In 2009, TAG and DiCaprio worked with a Green specialist to develop manufacturing changes such as cutting steel scraps by two thirds, reducing water consumption by 70 percent, and reducing fuel consumption by 11 percent, all while increasing their productivity. DiCaprio has also inspired TAG Heuer to implement other green measures in its subsidiaries, such as paperless offices in Latin America and the Caribbean, as well as online catalogue to reduce paper usage.

A luxury collection known for their local production and high quality, TAG watches have a unique power and automatic movement, said to maneuver according to the movements of its wearer. Another company secret fans might like to know? While Leo may have taken a large part in the creation of the Aquaracer 500M Leonardo DiCaprio Limited Editions, his favorite—the reportedly masculine and highly functional Calibre 16 Automatic Chronograph. 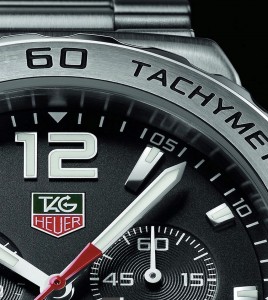 “Thanks to the stunning work of our R&D team, TAG Heuer will set once more a milestone in the history of watch making,” is what is to be expected with the new Formula 1 series that is to be launched in Geneva January 16.

The first series of Formula 1 was created back in ’85 when Heuer was joined with Techniques d’Avant Garde (“TAG”).  Heuer was dealing with disaster after disaster while trying to make it in the watch industry. With the combination of the two, they became one of the biggest names in Swiss watches.

The first generation F1 watches were designed by Eddy Burgener and used an innovative case construction; a mixture of a stainless steel inner case coated with Fiberglass.

Despite the success of the Formula 1, the series was to discontinue back in 2000.  It wasn’t because people weren’t buying the piece; the company thought the style and design was no longer the latest fashion in watches.  Out with the old in and with the new is what the company was getting at with this decision.

After a 4 year break, the Formula 1 returned to the public with an entirely new design and upgraded materials. The series had an entirely new look, but what did not change was the shape of the case and bezel.  Both are similar to the original Formula 1 pieces.  The Series 3 Formula 1 has a 40mm case, which is a more up-to date size compared to the previous versions that were only 34mm.

The watch was for the man how worked 9-5 in the office and on the weekends hit the mountain for some biking or skiing.  It was modern, trendy, and youthful.  Exactly how the company wanted the public to think of them.

20 different designs are in the new Formula 1 series, all are going to be launched this year at the watch show in Geneva.  All have a broad range of bezels, including brushed stainless steel, aluminum, ceramic and titanium-carbide. Things to look for on the piece are titanium-carbide “Full Black” stealth Formula 1 and for the first time ever in the series, there is both ceramic and steel version to choose from.

A simpler brushed stainless steel guard has replaced the titanium-carbide from past models, yet the new addition as the similar design as previous pieces. The design of the button at the end of the spindle, or the crown, was taken from the Grand Carrera series. So regardless of the new additions the piece can still be recognized by Formula 1 lovers.

Jean Christopher Babin, president and CEO of TAG Heuer, is promising a game-changing new regulator, breaking all high- frequency records. All there is to do now is to wait and see what happens in Geneva. 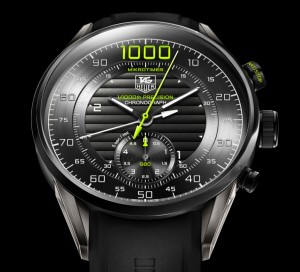