Feeling the Need for Speed? Push the Pedal to the Metal in a Free Oris. The watch will be on display at Baselworld 2012, where the winner will be presented the watch.

Oris launched a Photo Contest on its Facebook page inviting contestants to share photos wearing an Oris watch dedicated to the world of motor sports. Everyone grab your cameras, cell phones, video cams and get ready, set, snap and go!

Oris wants real people wearing their real watches capturing the spirit of motor sports. The contest has been dedicated to aficionados that are passionate about culture, diving, aviation and motor sports; and what better way and great timing for Oris to launch a contest with the approach of both Baselworld and the FIA Formula World Championship.

Oris definitely has the right formula both on and off the track these days. Its photo contest is perfectly timed with the winning contestant receiving an Oris watch at Baselworld 2012 exhibition in Switzerland, which will commence March 8 to 15; and Oris’ announcement on February 24 that it renewed its partnership with Williams F1 Team (Sir Frank Williams, Team Principal) just prior to the start of the FIA Formula One World Championship. These events are definitely on Oris’ speed circuit of upward mobility. Suffice it to say the heat of competition is in the air and Oris has started its engines and continues to bring the ‘vroom vroom factor’ with its watch collection. 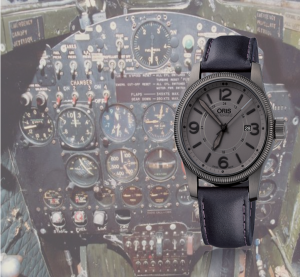 Oris Big Crown Date watch is a member of the Aviation collection. This timepiece takes off and lands on Oris’ runway of refinement. Its features boast clean lines and an almost steel grey metallic appearance leather wrist strap. It does have automatic winding date with date window at 3 o’clock, stainless steel grey PVD plated case and case back. It also has an impressive 38 hour power reserve. This timepiece is arriving on time and is coming in for a landing for all gents into aviator watches. 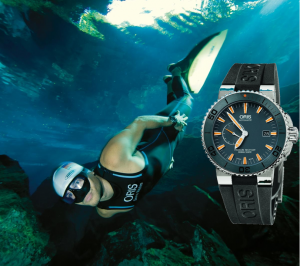 Oris Aquis Maldives Limited Edition watch is a member of the Diving collection. This timepiece plunges into depths of the deep mystic blue ocean. This weathering depths model has titanium case with blue ceramic minutes scale top ring. It has luminous indices and hands (dark orange) and is water resistant up to 30 bars. It is available in a black rubber strap or titanium metal bracelet. It is a limited edition, 2000 pieces, so dive in a get it now before it’s too late.

Oris WilliamsF1 Team Day-Date watch is a member of the Motor Sport Collection. This timepiece was engineered for speed with its 44 mm chassis and its Oris red or Williams blue ‘go-faster’ stripe which makes it necessary to strap-on and strap-in to feel the need for speed trackside fantasy. It has a sporty black PVD plated stainless steel case with flexible lugs. It also sports a dramatic black dial with black rubber strap and black PVD plated stainless steel folding clasp. It’s not a 2012 model, but it does bring the ‘vroom vroom factor’ so strap it on with care.

Oris has been making watches for over 100 years in Switzerland, which are distinctive for their mechanical movement and red rotor. Oris is proud of its timepiece designs and in keeping with its moto Oris is committed to manufacturing “Real Watches for Real People.”

Anyone interested in participating in the Oris photo contest should go to Oris’ Facebook page to enter and submit photos; friends, family and followers can vote on photo submissions. The contest is dedicated to aficionados passionate about culture, diving, aviation and motor sports. Details for the contest are also available on Oris’ Facebook page. The contest launched today, March 1, 2012 and closes on April 6, 2012. 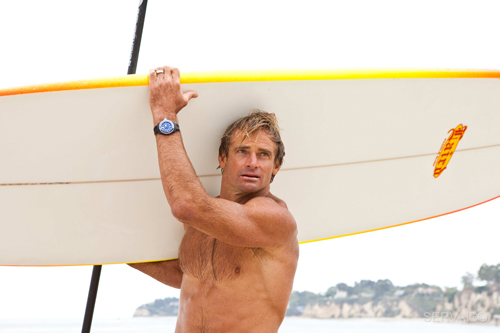 American big-wave surfer Laird Hamilton is famous for co-inventing tow-in surfing: a process by which a surfer can ride larger, faster waves through the assistantce of a jet ski or helicopter. Hamilton has mastered such extreme waves as Teahupo’o in Tahiti and Pe’ahi in Maui, Hawaii (popularly known as Jaws). Often hailed as the greatest big-wave surfer of all time, Hamilton frequently rides waves up to 70 feet high. Known for his spiritual experience of his sport and his mystical connection to the ocean, he is the author of the 2008 book “Force of Nature: Mind, Body, Soul, And, of Course, Surfing.”

In Aug. 2010, French fashion house Chanel announced its partnership with Laird Hamilton as the representative of their new J12 Marine Watch. In support of Hamilton and his environmentalist efforts, Chanel continues to endorse the Surfrider Foundation, a non-profit organization increasing awareness for the protection and enhancement of the world’s oceans.

The Chanel J12 Marine watch is Chanel’s first ever diving watch. The J12 Marine features a ceramic and steel case, anti-reflective sapphire crystal, luminesecnt hands and mechanical Swiss movement. The stylish watch is water resistant to 960 feet. Of the J12 Marine, Hamilton says “This watch is the epitome of authenticity, I have put it to the test in the waves and I can tell you, it’s got what it takes!” 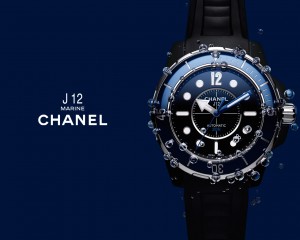 Laird Hamilton shared his inspirational vision with Oprah viewers on the Feb. 12 episode of “Master Class” on the Oprah Winfrey Network (OWN). In the episode, Hamilton discussed his experiences in big-wave surfing and his lessons on life. Growing up in Hawaii, Laird learned a love of free surfing from his father. Hamilton calls surfing his “art”, saying “I’m an artist, I want people to love my art, but I want them to love it because they really love it genuinely.” World renown for his big-wave riding, Hamilton says his next challenge will be to ride Hawaii’s King’s Reef. Oprah’s “Master Class” airs Sundays at 10pm on OWN.

In the upcoming year, Hamilton will be a featured speaker at the March 7 Global Sports Forum in Barcelona. The 2012 GSFB showcases inspirational stories and voices from the international world of sports, focusing on sports as the heart of modern society in political, economic, social and cultural dimensions.

This year’s Australian Open began on Jan. 16 in Melbourne. Djokovic was faced with defending his 2011 title against previous champions Roger Federer and Rafael Nadal, among others. The final match between Nadal and Djokovic ran almost six hours long, the longest Grand Slam finals match ever. After the ordeal of strength and endurance, Djokovic triumphed by winning three of five sets to become the 2012 Australian Open champion. Following the match, Djokovic stated, “Under the circumstances, it was definitely the greatest match I’ve ever played.” The win cemented Dkokovic’s exceptional record with three consecutive Grand Slam titles.

Novak Djokovic was named as a brand ambassador for Audemars Piguet on the opening day of the 2011 US Open, which Novak went on to win against the 2010 champion, Rafael Nadal. Djokovic has appeared in seven Grand Slam tournament finals from 2007 to 2012. By winning five of these seven and repeatedly defeating reigning champions Roger Federer and Rafael Nadal, Djokovic has established himself as a premier player in contemporary tennis. Of the partnership, the Swiss watchmaker says, “Above and beyond his undeniable tennis playing abilities, Audemars Piguet appreciates the generosity and altruism demonstrated by Djokovic, who is involved in a number of charitable endeavors.” Djokovic, in turn, praises Audemars Piguet for their “fine watchmaking”, saying “I truly admire both the traditional and modern aspects of the work accomplished by Audemars Piguet.”

To match their long history of horological accomplishment, Audemars Piguet’s brand ambassadors reflect their competitive spirit and commitment to excellence. While Novak Djokovic is the most recent addition to the Audemars Piguet team, Leonel Messi of FC Barcelona, Svetlana Zakharova of the Bolshoi Ballet and the Teatro alla Scala and LeBron James of the Miami Heat also sport Audemars Piguet watches.

On Dec. 18, 2011, Seiko partners Futbol Club Barcelona won the FIFA Club World Cup in Yokohama, Japan, beating out Brazilian Santos Futebol Clube to become world champions for the second time since 2009. The powerful Catalonian football club is among the most successful in the world, becoming the first team to win six out of six competitions in 2009. Supporter owned and operated, Barcelona’s motto “Més que un club” (“More than a club”) exemplifies their commitment to excellence and community, making them an ideal partner for Seiko Watches. FC Barcelona began its relationship with Japanese fine watch designer Seiko in March 2011. President and CEO of Seiko Watch Corporation Shinji Hattori commented on the partnership, “The history, culture and ambition of the Club are a perfect match with Seiko, and we look forward to a successful cooperation in the coming years.”

During their stay in Japan, FC Barcelona visited the new Seiko Salon at the Wako store in the Ginza district of Tokyo. FC Barcelona President Sandro Rosell presented Hattori with a Barcelona jersey with his name on it as a symbol of the strength of the two companies’ partnership. In the creative spirit of Seiko Watches, 11 FC Barcelona players helped design a unique wall clock. Each player signed his name next to his respective number on the clock to create a one-of-a-kind timepiece using the best elements of Seiko design and technology. The clock can be seen on display at the Seiko Museum Ginza Exhibition in Tokyo.

The unique timepieces come with a commemorative leaflet with the pictures and signatures of FC Barcelona players. Seiko is giving fans a chance to win one of the special Sportura FCB Chronographs in the SEIKO x FC Barcelona Fastest Goal Campaign. Through Seiko’s official Facebook page, fans can predict which FCB player will score the fastest goal in a series of upcoming matches. After the last match in the set, a winner is chosen from those who guessed correctly. The lucky fan from Session 3 (Jan. 6 to Jan. 27) will soon be announced on Seiko’s Facebook page and will receive one of the watches Seiko says “express the dedication to perfection that SEIKO shares with the most successful team in the world.” Seiko’s official website offers a fun and free SEIKO Sportura FCB Watch Widget for download and embedment that delivers the latest Seiko news and Twitter feed updates, available in English, Spanish, or Catalan.

Following their Club World Cup win, Seiko continues to support Barcelona-Japan partnership as the INAC Kobe Leonessa makes a training visit to FC Barcelona. The formidable Japanese team, including seven players from the 2011 FIFA Women’s World Cup champion team, will play a friendly match against Superlinga leaders FC Barcelona Femenino on Thursday Feb. 2. Sponsored by Seiko, the match is dedicated to the victims of last March’s tsunami and signed jerseys from the match will be auctioned in Toyko to support continuing relief efforts.