Enjoy quality and craftsmanship in a stylish watch? Oris has done it again. With their latest release of the Oris BC4 Retrograde Day watch, Oris has shown the world of watchmaking that it’s still in the game.

Oris, established in 1904, is a Swiss watchmaking company that has led the watchmaking industry with their precision timepieces. In fact, in 1968, Oris received the Observatoire Astronomique et Chronometrique. This is the award to a company for full chronometer certification which is the top honor in watch accuracy. Quite an accomplishment.

The Oris brand has a couple of distinctions that set it apart from other watches:

While Oris watches come in styles with the theme of aviation, motor sports, diving and culture, the BC4 Retrograde Day falls under the aviation theme. Its housing is a stainless steel BC4 case with a black dial which features a miniature rectangular day display below the middle of the dial. A small white triangle marks the day during the work week and then turns red for Saturday and Sunday positions. It is a rugged, handsome retro watch that comes in either a stitched black leather Gaucho strap or a stainless steel metal-pieced bracelet. The top glass is sapphire that is domed on both sides with anti-reflective coating on the inside. The superluminova numbers are very easy to read and view.

Oris has an impeccable reputation. Just ask any of the celebrities who wear the brand or has a sponsor relationship:

Oris has also maintained a solid connection with the musical world of Jazz. In 1996, it sponsored the London Jazz Festival. Since then, the brand commemorates a jazz artist every year, such as Louis Armstrong, Duke Ellington, and Miles Davis, in a limited edition watch.

The world of luxury watches is competitive as each watch brand (and there are hundreds) are competing for the same audience; always trying to one up the other in terms of design, originality, complexity, luxury and more. 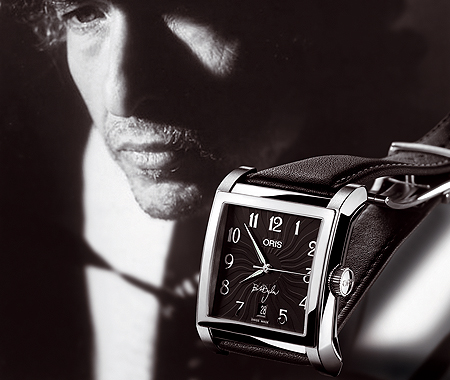 Oris watches are truly unique in that no other brand offers anything close to the men’s watch we’re about to review: the Oris Bob Dylan Limited Edition.

“There is a story behind every Oris, a reason why it became a watch.” These are the words from those that create Oris timepieces. Inspiration for Oris watches are found in the finer things of life: good music, great voices, fast cars and the wonders of the sea. Each watch is developed in collaboration with personalities from the arenas of motor sport, diving, aviation and culture.

During the 2009 Baselworld show Oris presented its limited edition Bob Dylan watch, which was created with input from the legendary singer himself.

The case is rectaungular and made from multi-piece stainless steel. The dial features a subtle pattern and limited edition engravings are seen on the back. The caseback shows a portrait of Dylan  and his signature can be seen across the dial. Limited to just 3,000 pieces worldwide, the watch comes in a special presentation box and sits alongside a Hohner Marine Band harmonica, the instrument which Dylan plays and has given him his iconic sound. 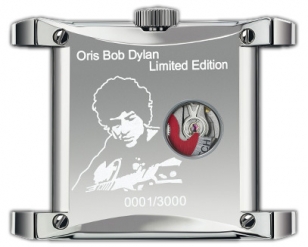 The strap is made from black leather and comes with a stainless steel folding clasp.

The Oris watch company was founded in 1904 and has become well-known for only producing mechanical watches. Oris watches have distinctive designs and are marked by the red rotor, the symbol of Oris mechanicals. Turn over any Oris watch and you will see, through a visible case back, the workings of the watch.