Chris Benz is an award-winning fashion designer featured in many magazines and online publications. Movado has created iconic Swiss luxury watches for the sophisticated timepiece lover for over 130 years. Thus, it was only natural that the two giants in their respective fields collaborated to unveil the limited edition Movado Bold watches by Chris Benz.

Educated at the renowned Parsons New School for Design, Benz’s career took off when he received CFDA’s Emerging Talent and Award Scholarship. He went on to become an official member of the CFDA years later after creating his own fashion line. He has made multiple appearances on television, partnered with eyewear companies, and his clothing designs are often featured in top fashion magazines such as Vogue, Glamour and Elle. His signature bold use of color ironically reflects the exact name of the collection he helped design for Movado.

Movado’s interpretation of Nathan Horwitt’s Museum Watch design acts as the face for the brand. Horwitt’s original watch was the first wristwatch showcased at the Museum of Modern Art (MoMA). Movado reproduced the Museum design with a solitary golden dot on the face of the timepiece, symbolizing the position of the sun at noon and the hands as earth’s movement.

Benz reinterprets the Museum style in his own distinct flair for the Bold collection, producing five bright designs in limited editions: 150 of black watches, 100 each of magenta/white, camel/white, blue/mustard, and only 50 of the teal models, with each piece going at the price of $550. Each watch case is sized at 42 mm, water resistant to 30 meters, and operates by Swiss movement. The main attraction of these watches is the drip-dot dial, or Benz’s approach to the Museum dot. Lively color combinations  for the dot and the watch background literally ooze Benz’s edginess, accented by his signature tie-dye smoke print silk straps. K1 crystals and the TR90 stainless steel cases put a finishing touch on these painterly pieces.

Benz effortlessly combines self-expression with Movado’s timeless elegance in his latest additions to the Movado Artists’ Series, joining the ranks of famed luminaries such as Andy Warhol, Romero Britto, and Andy Scharf. “We could not be more thrilled with the final watch designs and Chris’s dynamic reinterpretation of the Museum dot,” CEO and Chairman of Movado Group Efraim Grinberg said.

Movado’s latest collection of watches has been titled “Bold.”  The label is fitting, as the collection features some of the 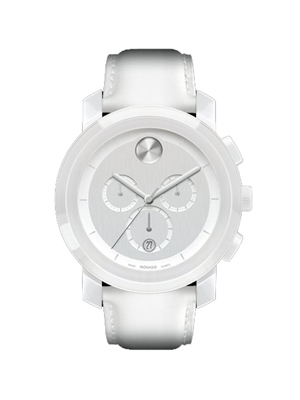 most striking watches on the market.  Case in point: the 03600011 Chronograph men’s watch.

The Bold Chronograph is an attention grabber.  Movado made everything on this watch the cleanest, starkest white possible; even the people snowed in all winter will look slightly tan.  Underneath the outstanding visual appeal lies a well-crafted watch.  Its 43.5 mm case is made from a high-tech composite PVD stainless steel and is completed with stainless steel inserts, crown, and pushers.  The white dial is offset by silver hands and the soleil dot that marks all Movado timepieces.  Within the dial are the three chronograph dials, each one set with dial rings that match the outer time ring.  A date window sits at the 6 o’clock position.

The strap of the Bold Chronograph is white leather and is lined in purple.  It boasts a k1 metalized sapphire scratch resistant crystal that is treated with an antireflective coating.  It also features a high quality Swiss quartz chronograph movement.

The Movado Bold Chronograph men’s watch is the perfect watch for those guys looking to catch the attention of a room with just a flick of a wrist.  This watch is undeniably sleek, perfect for a casual night on the town.