Platinum Patrimony Traditionelle 14-Day Tourbillon is one of Vacheron’s elegant timepieces featuring both a tourbillon, at 6 o’clock, and a 14-day power reserve indicator, at 12 o’clock. It has a minimalist dial presentation with Vacheron Constantin signature Maltese Cross emblem to the left of its 3 o’clock hour indication mark. 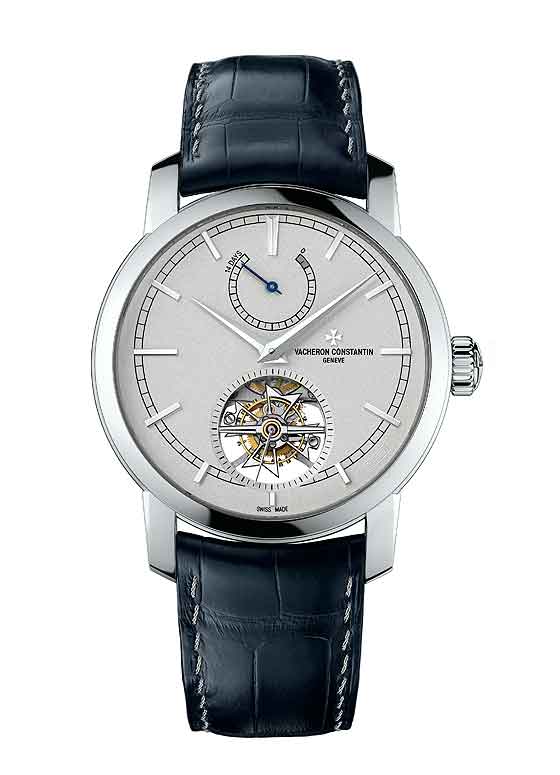 However, an element that makes this version of the Patrimony Traditionelle 14-Day Tourbillon so distinguished is not only its platinum 42mm case and dial, but its dark blue Mississippi alligator leather strap which is hand-stitched with silk and platinum thread – talk about sparing no expense.

The platinum dial is sandblasted, synonymous of the Collection Excellence Platine, and also houses the Vacheron’s Calibre 2260 manually wound manufacture movement. The platinum caseback frame bears the Vacheron Constantin name, No. 1/50 and PT950 which is inscribed between 4 and 5 o’clock. 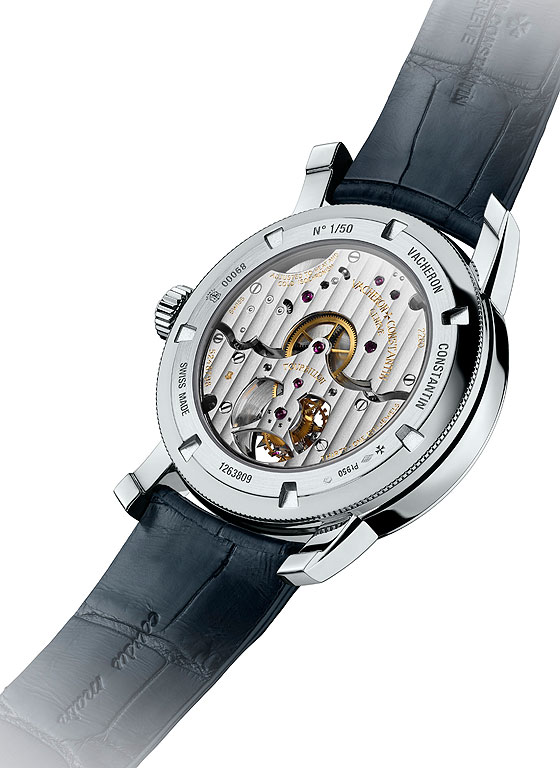 Patrimony Traditionelle 14-Day Tourbillon impressive 14 day power reserve uses four barrels that are interconnected and discharge concurrently, which is responsively slower than a single barrel system. Its tourbillon carriage is also shaped in Vacheron’s signature Maltese Cross, which is visible through the dial and partially from the sapphire crystal caseback. Its meticulous craftsmanship and design characteristics have afford it the Hallmark of Geneva award.

Platinum Patrimony Traditionelle 14-Day Tourbillon is a limited edition timepiece of only 50 pieces and is said to set to retail for $323,500.

Are you always searching for that watch that’ll knock you off your feet? Search no more with the Hublot King Power “Knockout” Watches!  Hublot watches have always packed a punch with their innovative use of materials and technology. Now the world-famous brand is producing twelve one-of-a-kind watches for a World Boxing Council (WBC) Charity Auction in September.

Hublot recently announced their partnership with the WBC this past March and are kicking off their new tag team with this line of twelve watches.  Each timepiece will be dedicated to boxing greats of years past including Oscar de la Hoya, Sugar Ray Leonard, Tommy Harns, Lennox Lewis, Mike Tyson, Julio Cesar Chavez, Marvin Hagler, Evander Holyfield, Jeff Fenech, Larry Holmes, George Foreman, and Roberto Duran. Each timepiece honoring a boxer will have the name of the fighter engraved on the back of the case and will include design elements as unique as the boxers themselves.

All the watches will mimic the bright green and red colors of the boxing belts and will use Hublot’ s trademark 18 carat King Gold  (King Gold is made exclusively by Hublot—the recipe is as closely guarded as a champion’s title). The watches will mimic more than the color scheme: the timepiece itself mirrors the fierce competition among equals found in both the boxing world and the realm of watch making. 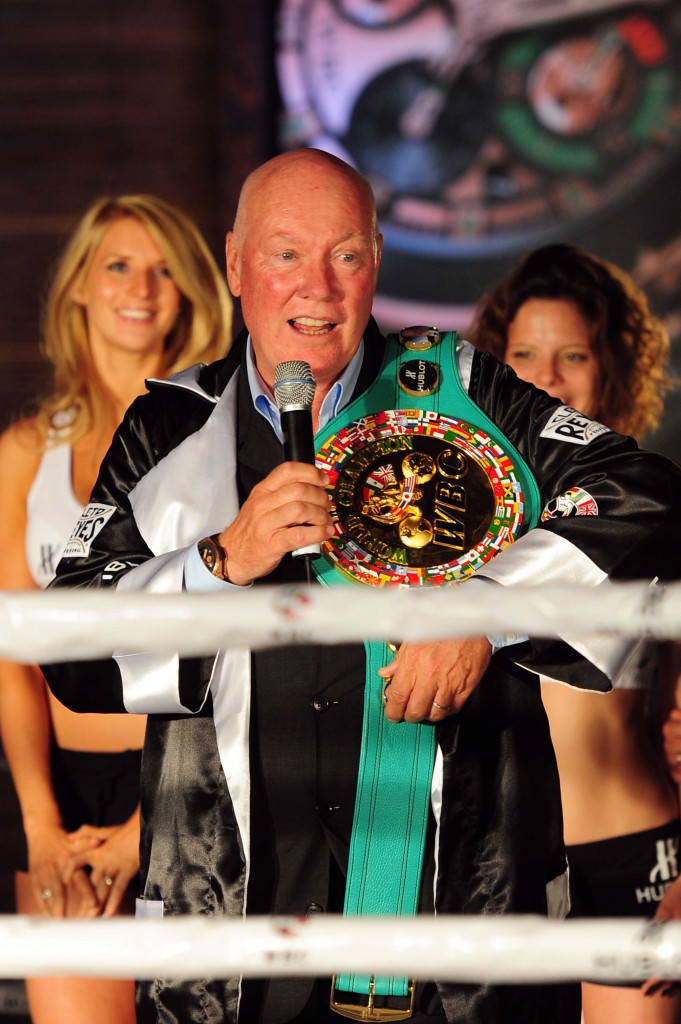 Just as the boxing world is full of strong competitors and fierce opposition, the watch-making world features its own head-to-head contests of durability, innovative technology, and the urge to go the distance.

It’s no coincidence that Hublot has picked its partner and its latest inspiration in the world of boxing. Both the sport and the art have long, rich histories spanning hundreds of years.  The persistence, diligence, and need to go the extra mile cement the duo between the two disciplines. Hublot is a newcomer to the field of top notch watches, but their bold moves have already landed them among the top of their competition, and their latest alliance with the WBC proves that they are in it to win it.

The auction will take place in September 2012 at Las Vegas. The watches will be presented to their new owners by the boxers that inspired the design, so those who wish to own one of these one-of-a-kind pieces had better come prepared to fight for them: who knows what kind of pro you’ll have to fight to get them! 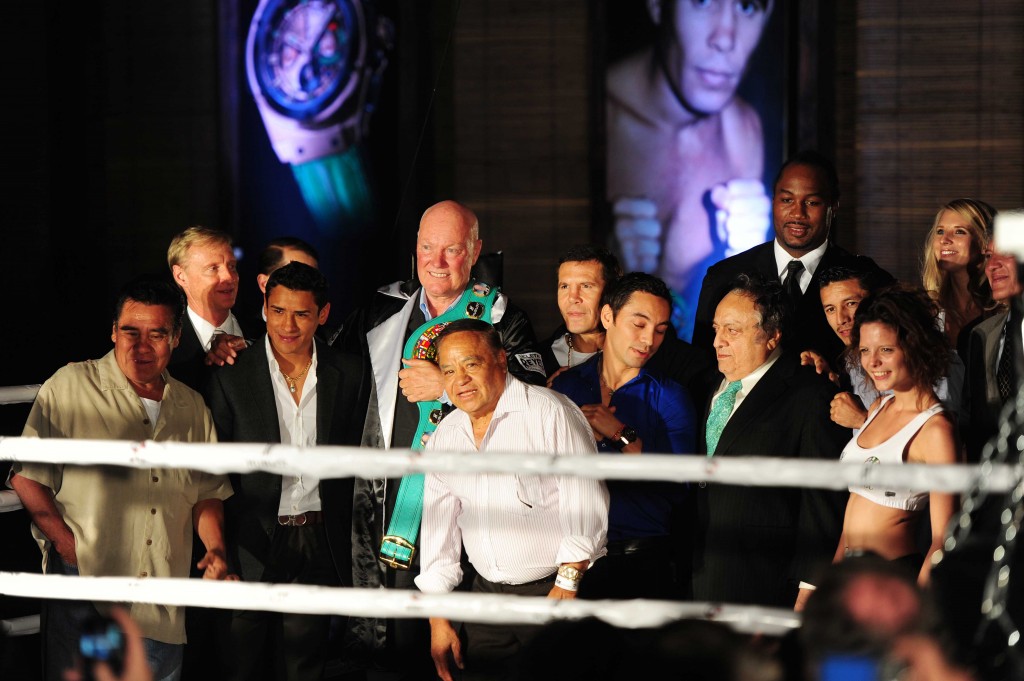 For the second year in a row, Raymond Weil launched a new special edition watch, sold to Internet users via the RW Club & Community online website during the month of December, to benefit and support the fight against cancer.

The Swiss luxury watchmaker’s approach is driven by the successful turnout of September 2010 and 2011 sales, which also aimed to support cancer-fighting causes.

In partnership with the Union for International Cancer Control, Raymond Weil designed an exclusive watch — the Freelancer limited edition timekeeper, which featured a mechanical movement with automatic winding, stainless steel case and a white dial with two sub-dials. Only 34 timepieces were produced, symbolizing the 34th anniversary of the brand. The limited edition watch was sold online, through the company’s website, to the public community and RW club members. The first week of sales was reserved for RW club members only. The company donated 25 percent of proceeds from the sale of the timepiece to UICC.

Raymond Weil then offered the public and RW club members a second chance to support the struggle against cancer in September 2011, selling the Maestro special edition. Self-winding mechanical movement, a stainless steel case snapped with a sapphire crystal anti-glare treatment, an anthracite grey dial and brown leather strap were among the timepiece’s features. Like the Freelancer limited edition timekeeper sold in September 2010, the Maestro model was sold exclusively online to Internet users and RW club members. 25 percent of those proceeds were donated to one of three cancer-fighting associations chosen by the purchaser. The three institutions, in partnership with Raymond Weil, included the Pediatric Hemato-Oncology Unit of Geneva University Hospital, the Breast Cancer Research Foundation and the Singapore Cancer Society.

Raymond Weil decided to build on the success of the Maestro limited edition sales in September 2011 and offered a third chance to support the good cause in December 2011. Like the previous models, the special edition timepiece was sold online, under the RW Club & Community chapter. The Swiss luxury watchmaker donated 25 percent of those proceeds to one of the previously mentioned associations as well.

Cancer, one of the leading causes of death around the world, will presumably kill 84 million people between now and 2015. This deadly disease affects one of every 600 children. However, 30 to 40 percent of cancers can be avoided through prevention, and one third of cancer cases can be cured with an early diagnosis and appropriate treatment. For this reason, Raymond Weil has made strong efforts to become involved in the fight against cancer.

This year, Raymond Weil watch company decided to continue its partnership with one of the most prominent music awards shows in the world. No, not the Grammys. The BRIT Awards!

The BRIT Awards takes place once per year in London and highlights musical talent in the UK and internationally. Among the many faces who will be present, English stars like Adele and and Jessie J. will surely be shoe-ins for awards.

Raymond Weil will be honoring these British musical talents by releasing a limited edition BRIT Awards timepiece series. All nominees and award winners will be given their own watches from this series.

For a short while, Raymond Weil will be making these limited editions available to the public as well. Some lucky watch fanatics will be wearing the same watches as Britain’s top stars, purchasable online at www.ernestjones.co.uk!

The timepieces are 42mm in size and made of stainless steel. They are chronograph movement watches with silver dials, sapphire crystals and chic leather straps. The British flag can be seen conspicuously on the watch’s dial and is complemented by its tasteful strap.

Raymond Weil has been consistently chosen as a partner in the BRIT Awards for the past 4 years because of its sophisticated, yet trendy, style. It is widely regarded as the watch of the music industry.

The company’s clientele is a reflection of its watches – chic and classy.

Some celebrities who will be wearing limited edition Raymond Weil watches in 2012 are Florence and the Machine, Coldplay, Lady Gaga, Rihanna and many more.

Raymond Weil has taken on an intricate role in the BRIT Awards short history. With its inception only twelve years ago, the BRIT Awards would not have been possible without Raymond Weil and other devoted partners of the gala event. Just one of the many ways this company shows support for the music industry.

As for the limited edition series – these items are clearly hot, and going quickly. The prices are steep. But, hey, they are made for celebrities.

Jaeger LeCoultre recently unveiled its “Proto Zero” watches, to be sold exclusively at Hong Kong’s recently opened Jaeger LeCoultre Boutique at Heritage 1881. Jaeger LeCoultre is working in conjunction with the Hong Kong charity End Child Sexual Abuse Foundation (ECSAF), which will receive 10 percent of all the proceeds from the sale of the watch.

“Proto Zero” watches are essentially the hand crafted prototypes of a select number of limited edition watches in the Jaeger LeCoultre collection. They have been refurbished, tested for quality control and meet the exacting standards of Jaeger LeCoultre. The scarcity of these models combined with their historical significance make them coveted pieces for any serious collector. Typically, prototypes have been stored at the Jaeger-LeCoultre watch factory in Vallée de Joux, Switzerland, and are not sold.

The End Child Sexual Abuse Foundation is a non-governmental philanthropic organization initiated in 1998 by actress and clinical psychologist Josephine Siao. Says Jaeger LeCoultre CEO Jerome Lambert: “Jaeger-LeCoultre is proud to present the unique ‘Proto Zero’ to the connoisseurs of Hong Kong. We are particularly proud to support the charitable cause of End Child Sexual Abuse Foundation with these one-of-a-kind creations. We perceive this project as a meaningful collaboration between our brand and our supporters to join hands in contributing to a good cause.”

The “Proto Zero” watches available at the Heritage 1881 Boutique are:

The Heritage 1881 Boutique is the third Jaeger LeCoultre boutique in Hong Kong, and the first outside of the Vallee de Joux factory to feature the unique and aesthetically stunning “Wall of Movements.” The wall is an approximately 15 foot transparent display that exhibits the evolution of nearly two centuries of Jaeger LeCoultre’s collection of watch calipers. This formidable installation is just one of the many features that makes the Heritage 1881 Boutique such a point of pride for the Jaeger LeCoultre organization, and the perfect milieu for the “Proto Zero.”