The 54th Grammy Awards ceremony held Sunday, February 2 at the Staples Center in Los Angeles to once again honor outstanding achievements by music industry professionals. Performances, parties, publicity and promotions will undoubtedly abound in the California performing arts mecca this weekend. In its second year partnering up with the National Academy of Recording Arts and Sciences (aka The Recording Academy) even the Gucci fashion house has contributed to the hype with a third addition to its I-Gucci GRAMMY® collection.

Designed by Gucci Creative Director, Frida Giannini, the watch is a variation on the I-Gucci XXL Sport. Proceeds will go toward the preservation and restoration program of music milestones at The Grammy Museum, established in 2008, an interactive and education museum dedicated to the history of the Grammy Awards and its winners.

Gucci Timepieces and Jewelry signed a three-year collaboration agreement with The Recording Academy in September 2010 and have produced three signature timepieces since: the I-Gucci GRAMMY in yellow gold PVD, the I-Gucci Latin Grammy in pink gold PVD and the latest, the I-Gucci Grammy Museum.

It is easy to see why this collaboration works. Giannini herself colluded with Jay-Z last year before the Grammys to host a star-studded brunch celebrating both the music and the Gucci collection associated with the ceremonies. “As a designer,” she said. “I always say I find an incredible inspiration from musicians who are in the music industry. Fashion and music, they have always been together because I think we are looking to musicians and musicians are looking to fashion.”

Gucci, a well-established fashion icon with a history of unifying the complimentary natures of haute couture and everyday street fashion – especially for industry superstars such as Rihanna, Mary J. Blige and Lenny Kravitz –  is perfectly positioned to embody this inevitable dovetailing of high fashion and popular culture. As Madonna sang at the SuperBowl earlier this month, “Music makes the people come together.”

Selling for $1,395 online, it’s unlikely that this watch will end up on the arm of your typical ‘99 percent’ street fashionista, but it is symbolic of a partnership that will endure for as long as fashion and talented musicians are a celebrated part of popular culture.

With a large 49mm face, the dial is black and yellow and the rubber strap is covered in soft patent calf leather imprinted with the Grammy gramophone. It has a digital, dual time-zone display, including date and alarm. It comes with dual chronograph movement and all the bells and whistles – even a sailing option for timing regattas. No diamonds or gems for this simple piece, however; it could easily be worn with a fur coat, a leather jacket, a tailored suit or a pair a thrashed jeans. 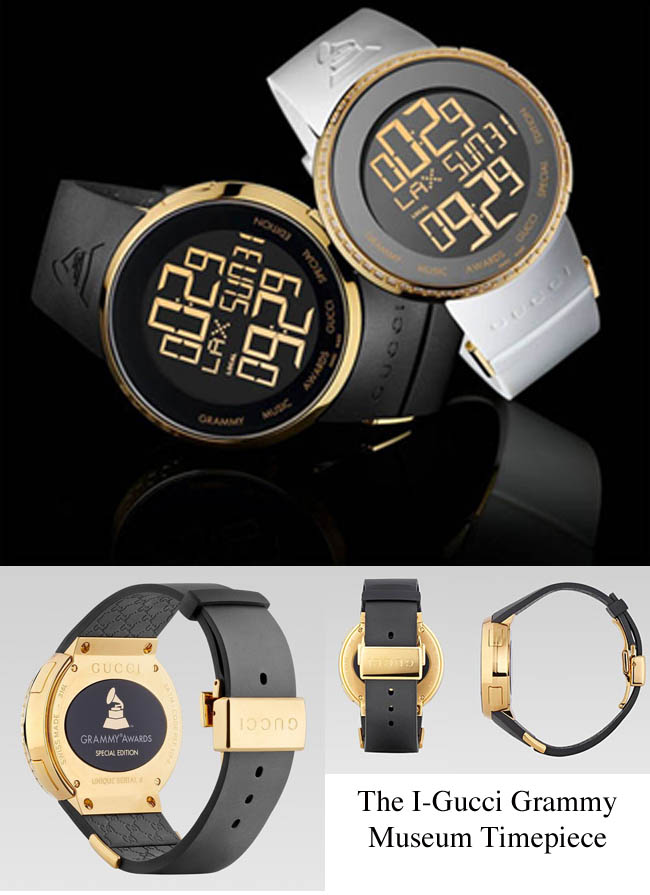