As the new year commences, Baume & Mercier decided to bring out a few new additions to their successful Linea Collection.

The woman’s luxury watchmaker is excited to showcase these new watches and add them to an already delightful line of fine timepieces. The Linea Collection is renowned for its high fashion and applicable watches. There is a watch in this collection that will fit any ensemble.

Baume & Mercier has become synonymous with quality since the company was founded in the small Swiss village of Les Bois in 1830. They have been pursuing the height of perfection with their watches.

The new additions to the Linea collection are no different. The Linea Collection line has some interesting aspects to it as well as the desirable quality of craftsmanship. No longer will someone have to choose between a watch dial because of how the strap looks. The Linea lines come equipped with interchangeable straps so the watch can match any occasion. This is a revelation for those who do not wish to purchase multiple watches just to match the outfit they will be wearing. The interchangeable strap is another great feature on an already magnificent line of watches.

The newest Linea watches have a diameter of 32 mm for easy viewing of the dial. They also feature automatic movements and sapphire case backings so the owner can gaze into the beautiful watch and see how the components work together perfectly and keep time as well as being a stunning piece of jewelry. The dial is comprised of Gilt hands and Gilt riveted indexes. Its finish is a sun silk satin and snailed silver-colored. It is water resistant up to 50 meters just in case a late night swim because a part of the evening. All the interchangeable straps are polished or satin-finished two-tone accompanied by a triple folding clasp to keep this wonderful timepiece elegantly attached to the wrist.

This year marks the 25th anniversary of the Linea Collection line and these new watches are a welcome addition to an already stellar series of timepieces. Baume & Mercier has once again produced beautiful pieces of art which just so happen to also tell time.

As many luxury watch aficionados know, last Friday, Jan. 20, marked the conclusion of SIHH, or the Salon International de la Haute Horlogerie. In simplest terms, the SIHH is the annual event in which watchmakers an designers are invited to showcase their latest innovations. To date, the SIHH has held over 20 shows, proving its relevance for the fine watch sector of fashion. At this year’s conference, which took place between Jan. 16-20, one of the industry leaders that grabbed the attention of watch connoisseurs was Baume et Mercier, which introduced a new piece this year.

While SIHH 2011 saw the introduction of Baume & Mercier’s Capeland Flyback Chronograph, SIHH 2012 met a new contender of the collection—the same model with a few tweaks, namely a change in color. The new-yet-classic Capeland bears a black, rather than white, dial face, giving a fresh look to the old timepiece. Further aesthetic adjustments included a new layout with two registers (last year’s had 3) and gilt Breguet style hands that emphasize its vintage feel. The new model is otherwise the same, available in stainless steel or red gold, a diameter of 44 millimeters and thickness of 16 millimeters. The chronograph movement inside is a La Joux-Perret automatic bi-compax complete with flyback and date, and runs at 28,800, and boasts a power-reserve of 48 hours.

As a final touch, the piece is appropriately engraved with the Greek letter Phi, a symbol of balance and perfection. The model seems to achieve an equilibrium between loyalty to its past, and functionality in its future. The new Capeland does not stray too far from its ancestor chronograph introduced in 1948, yet it also succeeds in maintaining modern expectations of a luxury timepiece, and a somewhat shocking change in face color.

Presenters in Geneva this year at the 2012 Salon International de la Haute Horlgerie, which takes place in Geneva, Switzerland, were likely not shy to reintroduce themselves to fellow watch manufacturers and designers. The new look seems only to reinforce the poise of a brand that simultaneously upholds its traditional values while sustaining contemporary qualities.

Baume et Mercier is introducing a series of new watches in 2012 for a number of its different lines. One new watch is from the Linea family in the 32mm family size. It is called the Linea 10072 and will be available in Spring 2012. The watch includes a diamond set polished and satin-finished steel. The watch also includes the date, an interchangeable bracelet and is delivered with two bracelets.

Other watches to be introduced in 2012 are from the Capeland line. The company adds a larger case size and new complementary two-tone colors for the dial in the core range. For the Hampton men’s line, Baume et Mercier is releasing two automatic models with an ergonomic integrated polished and satin-finished bracelet with a new triple folding security clasp.

Baume et Mercier provides watches for men and women. The watches for the women are characterized by a satin domed volume and curved sapphire crystal. The collection also includes a case that has 80 diamonds for a total of 178 carats. Watches created under the Hampton Model include the list of products below :

The company is represented in over 75 countries and produces about 200,000 watches a year. The Baume family opened one of the first watch shops in the Swiss Jura region in the village of Les Bois. The objective of the company from the beginning was to make high-quality traditional watches enriched by the technological breakthroughs of the era. This philosophy has not changed.

The company has branches in Geneva, Switzerland and Philadelphia, PA in the United States. 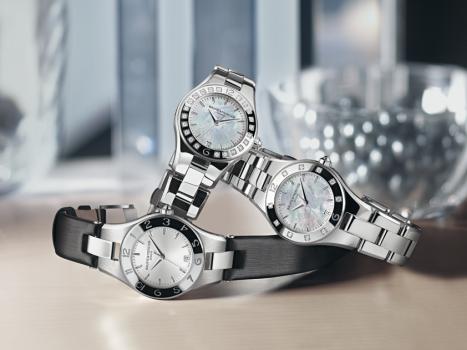 A lot of designers feel that the best time to introduce a new collection is the first part of the year. With the beginning of 2012 still in the present, one can expect to see several new lines coming out. Baume & Mercier happen to be one of those designers who feel that the first of the year is the best time to go public with new luxurious designs.

Baume & Mercier introduce new wrist watches this new year. New Baume & Mercier designs have been added to the Linea collection, the Hampton collection and the Capeland collection. These new luxury wrist watch lines are all Hampton inspired. The elegance and luxurious lifestyle of seaside living is presented through these brand new time pieces in a way that is sure to make every watch guru want to own one.

The Hampton collection is the poster child for the Baume & Mercier brand.  Inspired by a museum piece dating back to the 1940’s, the Hampton collection gives off a sense of fine casual living to those who wear it. The Hampton collection is best known for its noticeably rectangular case that holds a certain vintage look. Before 2012, the men’s Hampton line did not contain a style offering a stainless steel bracelet. To complete the men’s line and to offer another watch to the women’s line, Baume & Mercier is releasing two new automatic models that have an ergonomic integrated polished and satin-finished bracelet with a new triple folding security clasp. The new security clasp is not only very simple to open but also safer.

2012 has been very kind to Baume & Mercier thus far. The luxurious designer brand is off to a great start.

Luxury watches are functional as well as being beautiful pieces of wearable art. Most high-end timepieces are attractive but lack durability and resilience for their high price tag.  Baume et Mercier’s classic yet sporty timepieces set the standard for luxury watches for both males and females in the 20th century and continues to set trends in high-end watches.

Baume et Mercier appear to have found the perfect blend of elegance and functionality with the Riviera Sport Chronograph model. The Riviera was first released in 1973 and gained notoriety for being a lavish yet robust chronograph which underwent the ultimate test of durability by being mounted on the wheel of a BMW M1 before the start of the Le Mans 24-hours race.

The Le Mans 24-hour race or 24 Hours of Le Mans is the world’s first sports car endurance race which has been held annually since 1923 in France near the city of Le Mans. This race is universally known as the Grand Prix of Endurance and Efficiency.  Teams must balance speed against the cars’ ability to run continuously for 24 hours without undergoing any mechanical breakdown and manage the cars’ fuel, tires and brakes. The endurance of the drivers is similarly tested as drivers frequently spend shifts of over two hours behind the wheel before stopping in the pits and allowing a relief driver to take over the driving obligations. Drivers then take a quick break to eat and rest and return to drive for yet another shift.

The Riviera was able to withstand high speeds as well as the pressure of fast acceleration while not being affected by the centrifugal force of spinning wheels, heavy rain, or penetrating heat from the brakes. The watch was able to function with just as much precision at the end as it did in the beginning of the race. Though the Riviera’s resiliency is quite impressive, the timepiece is also extremely attractive. Its casing is in a classic stainless steel with a complementary steel bracelet. The watch bears a unique stainless steel bezel with 15-minute hash marks, has Swiss-automatic movement, and is water resistant up to 330 feet.

The groundbreaking Riviera model was one of the very first steel sports watches to feature a twelve-sided design. The Riviera later became Baume et Mercier’s best-seller and its flagship model for 20 years. Baume et Mercier’s classic watches are definitely an investment piece and although their timepieces are at a higher price point; they will unquestionably remain in demand for their quality craftsmanship and stylish design.