James, aka “King James”, collaborated with Audemars Piguet (AP) to design a watch that would reflect his personal style and refined tailored demeanor. James worked extensively with the AP team to produce a watch design that was capable of effortlessly transitioning from everyday casual wear to a sophisticated affair. James commented that he wanted the design of his AP Royal Oak Offshore chronograph to be something that people would love as much as he loves playing the game of basketball – an objective Audemars Piguet works to achieve in each of its watch designs. 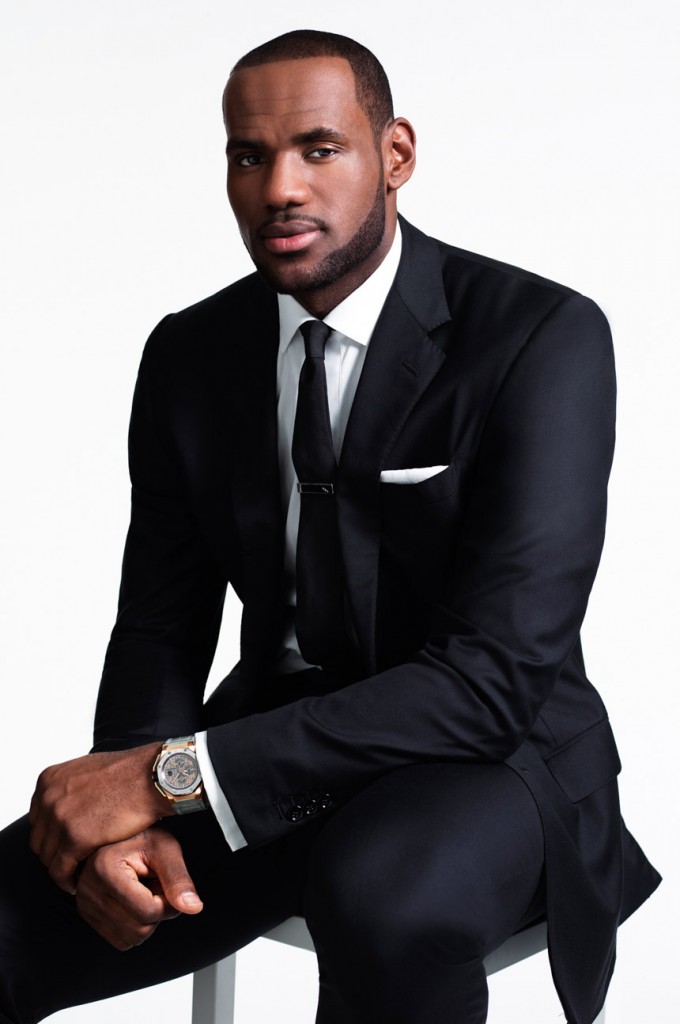 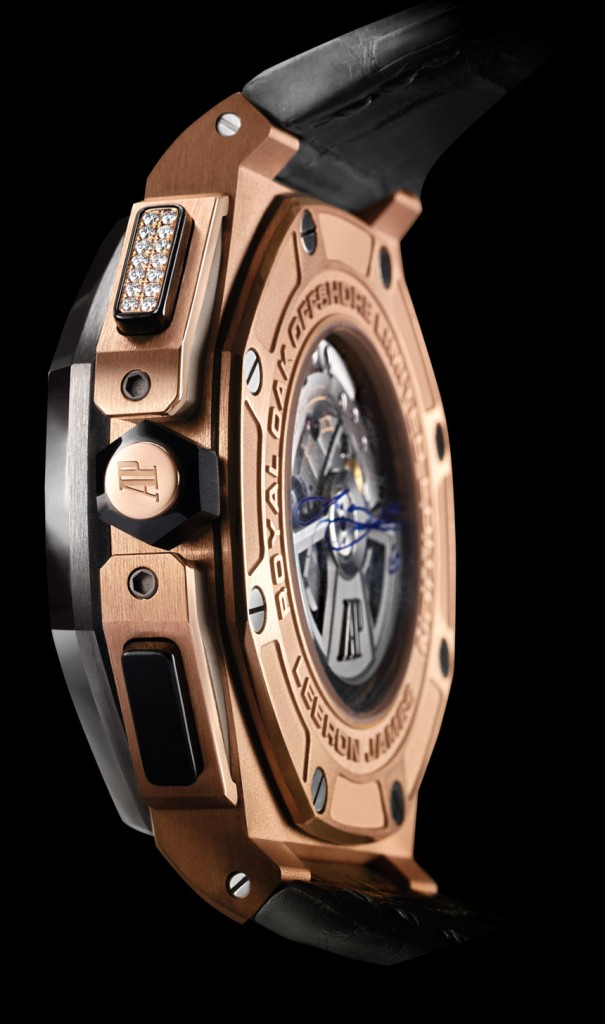 Audemars Piguet watches can be found at watchesonnet.com.

In Kanye and Jay-Z’s hit new song “Paris” off the album Watch the Throne, Jay-Z raps, “Audemars that’s losin’ time, hidden behind all these big rocks.” While this line may go over most of their audience’s head, it’s an instant recognizer to any watch enthusiast.

The history of the Audemars Piguet watches began over a hundred years ago in Geneva, Switzerland in 1889. The company was known early on for producing very complex watches for the time, such as creating the world’s thinnest pocket-watch in 1925 and the world’s first skeleton watch in 1928. In fact, AP is one of top three original Swiss watchmakers along with Patek Phillipe and Vacheron Constantin.

Though the Depression era slowed the luxury watch company down, for obvious reasons, the brand was able to make a comeback during the World War II era. It did this by producing one of its most well known models, an ultra-thin display watch that can be used as a stopwatch called a chronograph. This watch caused the sales of Audemars Piguet to expand worldwide throughout the 1940s and 50s. Through the following decades, the brand designed the thinnest automatic movement watch, the world’s thinnest wristwatch, and their famous “Royal Oak” watch, which is considered to have created the market for the stainless steel luxury watch.

Audemars Piguet also gained a reputation over the years for producing high-quality watches for Tiffany & Co and Bulgari to be re-banded under their own names. Though the name Audemars Piguet is generally not as recognizable as Rolex, their company produces watches of a much higher quality. The AP website boasts that much of their watch-making is done by hand and can take months to complete, and that each timepiece manufactured in-house is still made using old-fashioned tools.

These watches are still now made and tested thoroughly; the movement components inside each watch is highly complex and involves thousands of millimeter precision, while more common brands such as Rolex are almost all machine made and not nearly as accurate. But there is a price to be paid for such luxury. Depending on model and special features, an Audemars Piguet watch can go anywhere from five thousand to a hundred thousand dollars. So, it’s no wonder Jay-Z has one.

The brand is also keeping with the modern times. Audemars Piguet has several celebrity “ambassadors” they sponsor, such as top of the line athletes LeBron James and Lionel Messi.

Click here to view a selection of Audemars Piguet Watches on WatchesOnNet.com.

Established in 1875, Audemars Piguet have been renowned as  masters of the art of precision, and in the past few decades are now being hailed as the who’s who in ultra-class sport watches. Having been spotted on everyone from Trey Songz to their very own ambassador Lebron James, and even name dropped by Jay-z, Audemars Piguet stands alone as the pick-of-choice for Hollywoods’ finest. With each and every watch hand-machined over every facet of its’ manufacture, it’s easy to see why Audemars Piguet is at the top of the food chain.

The company has finalized their releases for the 2012 Novelties, eight revamped and restyled Royal Oak watches that are statements of the company’s artistry and integrity with their craft, more works of art than a simple time-telling device.  This years’ collections features innovated platinum and pink gold cases and bracelets, as well as the outstandingly beautiful Royal Oak Quartz and Royal Oak Self-winding, adorned each with 40 brilliant cut diamonds around the casing. Trendsetting once again, several of these watches have re-adopted the classic ‘tapisserie’ motif on the dial. Those styles include the Extra-thin Royal Oak, Extra-Thin Royal Oak Tourbillion, Royal Oak Chronograph, and the Royal Oak Self-winding, three of these styles are also considered incredibly efficient on top of glamorous, as they do tell time. This years’ collection surpasses itself in quality and exudes elegance; a person could hardly wish for anything more out of their luxury wrist-wear.

As always, Audemars Piguet has delivered above and beyond the call of duty in this years’ Novelty collection, with their gorgeous designs, superb crafting, and statement of superiority. No doubt we will see these cropping up on A-list wrists around the modern world, with styles to fit every occasion. Who knows what else we will see from Audemars Piguet later this year, or for next years’ Novelty collection, but Dear Lord I do hope it’s covered in platinum-plated diamonds and makes heads turn from miles away. 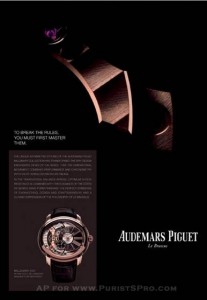 “To break the rules, you must first master them.”  This little bon mot epitomizes a well-known fact among adepts and innovators in any creative field, from writing to architectural design, fashion and even horticulture. First you must understand implicitly how things work, for then – and only then – can you begin to truly play. Audemars Piguet, the esteemed makers of sumptuous Swiss luxury watches established over a century ago, understands this concept so well that they have adopted the phrase as the cornerstone of their new 2012 ad campaign.
“Over the years we have demonstrated our mastery of the art of haute horology and yet Audemars Piguet has also always been a beacon of innovation and creativity that dares to break new grounds,” said CEO Philippe Merk, explaining the choice. “While the watches that we make are expressions of our respect for the traditions of hand crafted timepieces and while we celebrate the fact that we are the one of the few major Swiss brands still in the hands of the descendants of the original founding families, we are also a modern, progressive company famous for our innovations in technology, the daring use of new materials and bold designs.”
The new campaign was created by Lowe Superculture in London and has two complimentary components: one intended to highlight the technical and design aspects of the watches themselves and the other with a focus on paying homage to the origins and history of the brand itself.
To capture the latter idea, British landscape photographer Dan Holdsworth spent several weeks approximately five and a half miles southeast of Paris, photographing the Swiss landscape near the longtime home of Audemars. So committed are they to this idea that the name of Le Brassus village, in the Vallée de Joux in western Switzerland, has even taken the place of the familiar line in their brand logo: “Le maître de l’horlogerie depuis 1875.” 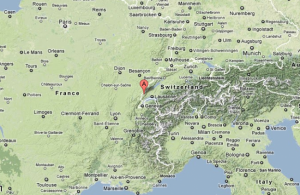 As for design and innovation, renowned still life photographer, Richard Foster, was brought in to capture various components of the timepieces themselves and visualize the concept of the new tagline. This is accomplished primarily through close-up shots paired with a brief explanation.
The new ad campaign has gone hand in hand with the launch of two new models: the Millenary 4101 and the new Royal Oak. Now in its fortieth year of production, the new Royal Oak – 41mm diameter, stainless steel, blue face – is a cleaner variation on a watch that has seen many interpretations. 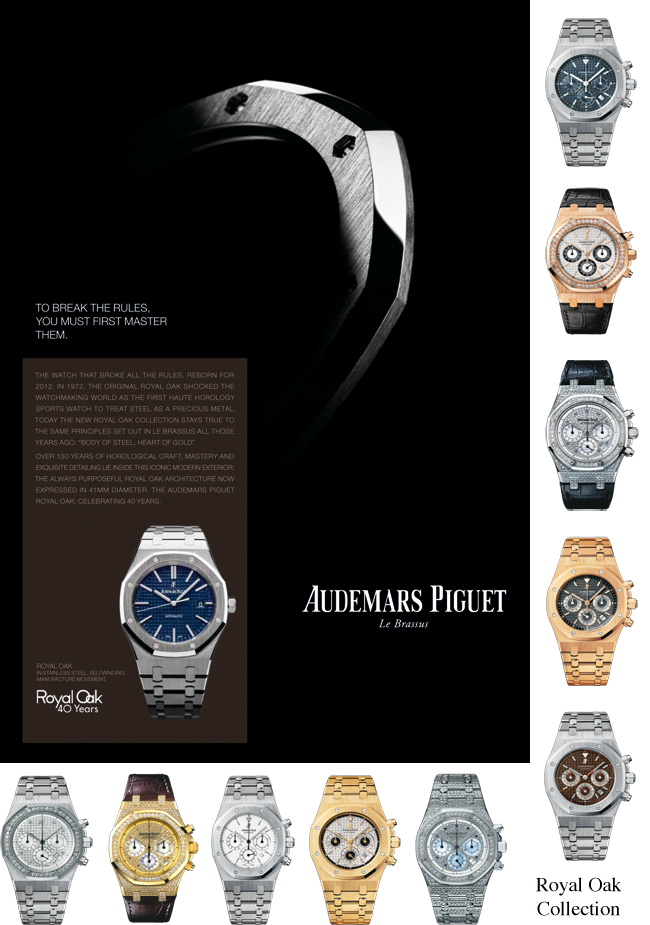 It’s always fun to see an old company roll out a new ad campaign, and it’s particularly nice when a company you like and respect does it well. Cheers to breaking the rules… and doing it right.

This year’s Australian Open began on Jan. 16 in Melbourne. Djokovic was faced with defending his 2011 title against previous champions Roger Federer and Rafael Nadal, among others. The final match between Nadal and Djokovic ran almost six hours long, the longest Grand Slam finals match ever. After the ordeal of strength and endurance, Djokovic triumphed by winning three of five sets to become the 2012 Australian Open champion. Following the match, Djokovic stated, “Under the circumstances, it was definitely the greatest match I’ve ever played.” The win cemented Dkokovic’s exceptional record with three consecutive Grand Slam titles.

Novak Djokovic was named as a brand ambassador for Audemars Piguet on the opening day of the 2011 US Open, which Novak went on to win against the 2010 champion, Rafael Nadal. Djokovic has appeared in seven Grand Slam tournament finals from 2007 to 2012. By winning five of these seven and repeatedly defeating reigning champions Roger Federer and Rafael Nadal, Djokovic has established himself as a premier player in contemporary tennis. Of the partnership, the Swiss watchmaker says, “Above and beyond his undeniable tennis playing abilities, Audemars Piguet appreciates the generosity and altruism demonstrated by Djokovic, who is involved in a number of charitable endeavors.” Djokovic, in turn, praises Audemars Piguet for their “fine watchmaking”, saying “I truly admire both the traditional and modern aspects of the work accomplished by Audemars Piguet.”

To match their long history of horological accomplishment, Audemars Piguet’s brand ambassadors reflect their competitive spirit and commitment to excellence. While Novak Djokovic is the most recent addition to the Audemars Piguet team, Leonel Messi of FC Barcelona, Svetlana Zakharova of the Bolshoi Ballet and the Teatro alla Scala and LeBron James of the Miami Heat also sport Audemars Piguet watches.