Omega is famous for many things, most notably for creating the NASA-approved timepiece worn by astronaut Neil Armstrong on the first moon landing in 1969.  The company is also known for its association with the Olympic Games as “official timekeeper” and as the creator of the legendary timepiece worn by Agent 007 in James Bond movies.  So it will be no surprise to diehard fans that Omega continues to push the boundaries of technology in watch making, most recently with the development of the coaxial escapement.  This Omega innovation allows the intricate movement within their watches to require very little or no lubrication over time. 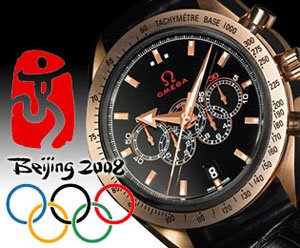 Two newer Omega creations caught the attention of horologists and luxury jewelers recently at Baselworld.  They are the De Ville Hour Vision and the reissue of the Ploprof Divers’ Watch.

Omega’s De Ville Hour Vision, first released in 2007, is considered the “total package” of Omega’s technical achievements.  It features Omega’s 8500 caliber in-house movement, which represents a return to Omega’s glorious roots as a world-class watch maker.  The chronometric precision within this movement is uniquely visible through a side-view on the inner-casing of its sapphire crystal, as well as on the exhibition backing.  It is the 3-piece architecture of this watch’s case that makes it so refreshingly different – allowing for the display of more minutiae while remaining elegant and pure in form.  Details like the 18 karat gold hour markers and hands, the angled window displaying the date, and polished bevels that highlight a brushed satin finish, make De Ville Hour Vision one remarkably beautiful timepiece.

With all the outstanding value that this watch represents, it is surprisingly luxurious for its price.  Many Omega fans have been pleased to find such “haute horology” within a mid-range price point, and so far no one has been heard complaining.

Another exciting development from Omega is this year’s reissue of the Ploprof Divers’ Watch.  Making waves at the 2009 Baselworld exhibit in Switzerland; this was welcome news for many sport watch fans.  The reissued model is as distinctive and bold as the original Ploprof, only this one is has a water resistance of 1200 meters, far exceeding the 600-meter limit of the original issue.  It also includes the in-house 8500 caliber Omega movement, complete with co-axial escapement.

Besides doubling its water-resistance, Omega has set the bar very high for the Ploprof’s instrumentation too, making it a top competitor among divers’ watches.  One of the main characteristics is the chunky profile of the Ploprof’s massive one-piece case, fashioned in solid stainless steel.  A smartly designed bezel lock allows rotation of the dial only upon depression of a security button, and the crown is further protected by a crown-locking nut and imposing steel slabs.

Toughness and elaborate “bank-vault” construction are not the only features that make the Omega Ploprof exceptional though.  This super-professional divers’ watch is also unique in its unmistakable uniqueness and faithful representation of the legendary original.  Omega Watches has also added the option of a stainless steel mesh bracelet, in addition to the classic rubber strap.

While the price of this watch is one of the highest in its category, this is a testament to Omega’s uncompromising use of technology and materials.  The Omega Ploprof reissue would undoubtedly impress one of its biggest fans, the pioneering Jacques Cousteau, who wore the original on many of his saturation-dives.