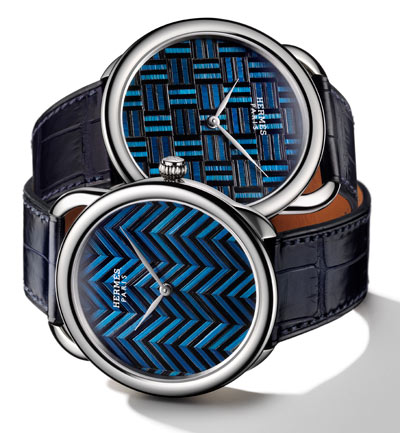 In 2010, Hermès recreated several pieces of furniture based on Jean-Michel Frank’s furniture designs. The French interior designer known for his minimalist aesthetic and luxury materials was a strong proponent of straw marquetry, an intricate art form that has all but disappeared in recent years. Presenting such artistry on a watch dial requires an extremely complex miniaturization technique, one that differs greatly from straw marquetry in relation to furniture. The two versions of the new Arceau Marqueterie de Paille display elaborate backgrounds that show the hard work put into their production and the novelty of straw marquetry applied to watch design.

Originally designed in 1978 by Henri d’Origny, the Arceau has now been released in two new versions. They differ only in the black and blue motifs of the watches, with the trademark Hermès tie patterns of either chevrons or tiny squares, encased by the 41 mm diameter white gold case. The model also features the asymmetrical lugs from the original model, with the stirrup-fitting shape evoking images of the brand’s traditional saddle-making roots.

Manufacture Vaucher’s Calibre H1928 movement, made specifically for Hermès, self winds the two Swiss-made models. The 220-part timepieces glitter with 32 jewels, pack a 55 hour power reserve and run at 28,800 vph. The matte indigo alligator watch strap finishes the look by matching perfectly with the straw dial.

Today, only one French farm produces the rye straw needed to create these models. Already the optimal straw by virtue of its length and lack of knots, the rye still must undergo hand reaping to select the most usable parts. After mass coloration and a drying period, craftsmen subject the straw to a variety of weather conditions before being split open with a blade. Much physical strength is used in cutting up wisps before the artist configures how to assemble them. Finally, the straw marquetry is laid out in its ultimate glory on the watch dial, akin to the process needed to create leather-bound books.

The venerable House of Hermès takes considerable pride in hands-on craftsmanship, especially those involving leather, as the brand has made saddles since 1837. Many other materials, precious or humble, find their place among Hermès workmanship and join together hand coordination with brainpower to create objects that embody the brand most. The Arceau Marqueterie de Paille is thus a prime example of Hermès’ artistic expression.