That isn’t a question I pondered much, since the only watch I know of that ever saved a life was the one seen in James Bond movies.  But Breitling’s “Emergency” watches are truly designed to be life savers, especially if you are an aviator. 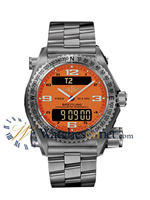 Breitling has long been known as the watch maker for the aviation industry, so it should be no surprise that they were the first to invent a timepiece that can transmit an emergency aviation distress signal.  When two British helicopter pilots, Steve Brooks and Hugh Quentin-Smith, crashed their chopper in Antarctica, they were found and brought to safety by activating the Emergency transmitters on their Breitling watches.  Thanks to their watches, they were able to reach a Chilean aircraft and were rescued.

The Breitling Emergency is one of the most recent additions to the Breitling watch company.  The 534 edition contains a micro-transmitter, with is pre-programmed to transmit on the distress frequency 121.5 MHz.  Activated by unscrewing the protective cap and extending the antenna, the transmitter’s signal flashes within a range of 100 miles.  It works using a separate set of batteries, which are not depended on the watch’s battery.

In addition to the civilian version, Breitling Emergency also created a watch for military purposes, which transmits a signal on the 243 MHz frequency.  Both models operate on a quartz chronograph, with a titanium case, bright coral dial, and professional titanium bracelet.  The round case is thicker than most, weighing in at 84.6 grams, and the analog dial includes a digital portion that can keep track of another time zone and be used as an alarm or timer.  In addition, the Emergency features glare-proof glass on a sapphire crystal, a stopwatch, and a day/date calendar.

Not intended for the faint of heart, a “fully loaded” Breitling Emergency can cost as much as $55,000.